Cosmos and the problem of 2-hour movies 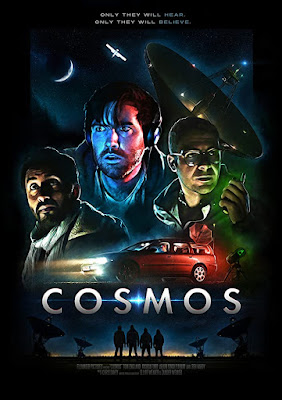 A couple of days ago I watched a recent, enjoyable and worthwhile, ultra-low budget movie called Cosmos (2019). At the end I thought, as I have thought scores of times before: "That was a good movie, but it would have been a really good movie if it was half-an-hour shorter."

I can't be bothered to do the research; but I would guess that a much higher proportion of the very best movies are around 90 minutes than clock-in at two-plus hours. Clearly, it is easier, more natural to construct a good movie at the shorter length.

I must say, I find it hard to understand why so many movies end-up too long. So obviously too long - such that almost any audience member could tell the maker where the cuts could and should be applied.

My main theory is that good editors are rare, and/or that the editor is given too low a status in devising the final cut. This seems to be confirmed by the fact that 'director's cut' movies are almost always worse; which suggests that editors make a vital input to quality (albeit director's cuts are only done for already-successful films; and this may tend towards meddling with the final product being a case of 'the only way is down').

Considering how vital is the art of editing to the success of a movie; it is striking that the public don't know the names of the best film editors, in the way we know the best directors, writers and actors.

But the difference editing makes can be seen between the first and third movies of Peter Jackson's Lord of the Rings - which are superbly edited - and the Two Towers movie, which is much less-well edited. This is something like a controlled experiment; in that the other key members of the production 'team' were unchanged, and the editor was the major difference.

Another suspicion is related to stars demanding a certain minimum amount of screen time (as when the first Batman revival movie (1989) was structurally spoiled and the impact diminished by an over-extended final scene with Jack Nicholson's Joker).

Or, it may simply be that the film makers get too attached to particular scenes, and cannot see that they are making the movie as a whole worse.

Anyway, I am confident that if all 2 hour movies were forcibly subjected to a skilled and insightful re-editing down to half an hour shorter; nearly all of them would be improved significantly.

Some years ago, I read somewhere that one of the reasons why movies are much longer now than in the classic Hollywood era is that, in the United States, movie theaters have been located in malls outside the cities.

So families have to drive to go to the malls and some times the time of driving is long (one hour, two hours). So families only go to the mall to spend all the afternoon there. Once they get to the mall, they don't want a short movie. It is not worthwhile after so much driving.

But, whatever the reason, I agree. Most movies are too long.

> Anyway, I am confident that if all 2 hour movies were forcibly subjected to a skilled and insightful re-editing down to half an hour shorter; nearly all of them would be improved significantly.

I'd challenge you to do this with any of the Studio Ghibli animated films (which are nearly-all exactly 2 hours in length!)

I suppose the key difference is that for live-action films a vast amount of (often superfluous) footage can then be shot. A filming location and cast of actors may be available only temporarily, and it makes sense to film as many scenes as can be thought of, in case any of them are needed later.... The editor must then be extremely disciplined in cutting the accumulated footage down to a reasonable size, or the result just drags on (as will be obvious to anyone attempting to watch a Lord of the Rings 'extended edition').

Whereas an animated movie is built up frame by frame and the decision to 'film' an additional scene is hard to take lightly. The decision to film a scene and then cut it would be considered a gratuitous waste of the animators' labour.

Like a Sonnet has 3 quatrains and a couplet, a movie should be 90 minutes with a beginning, middle, and end. The structure promotes creativity and makes it easy for viewers to follow.

Movies have become painful to watch for this and other reasons.

As in the film Amadeus, the Emperor's edict: "too many notes".

@Chent - I suppose if that is true, the answer is to show a 'short' before the main feature, as used to happen when I was younger.

@Serhei - I know better than to say anything adverse about Ghibli when you are in earshot - but your general point is correct; which may help explain why most of the best movies of recent years have been animated. The best live action movie I've seen lately was probably Christopher Nolan's Dunkirk of 2017 - which was 1:46 - shorter than most.

@d - A very good movie. To us, nowadays, Mozart seems (at least until late in his career) to have very sparse textures, and very few notes.

One of the things that I like about movies is the chance to enter another world, and I want to spend time there. That's an advantage for well-constructed series with solid story arc development -- they can last dozens of hours.

Perhaps for that reason, I like the directors' cuts that I've seen -- though that might only consist of Blade Runner and Jackson's LOTR trilogy. An example from the Fellowship film -- when Frodo and Sam set out for Bree, the extended version has a lovely enchanting scene where they see an elven migration. I don't think that's in the studio release, but I love it. It's not central to the main story, but it is informative about the story's world (and elves are awesome). I'm into world-building; so, I love those details and tangents.

Moreover, the director's cut of Blade Runner is self-evidently superior in every way. I saw it in Paris for the first time because my Spanish roommate was obsessed with this old movie that I had never even heard of. I loved it and went back a few times to watch it again. I didn't even know it was the non-standard version until I returned to the States and rented Blade Runner to watch with my brothers. The narration scandalized me. The DC is much, much better.

I saw Blade Runner once while getting slightly sozzled at a Christmas do.

It was OK but I did think that the writers of SF short stories, of the sort I read lots of between roughly ages 14 and 18, would have made similar points more tersely.

All that reading and only one story I remember by name: Flowers for Algernon.

I regard Blade Runner (cinematic release) as contender for Best Movie Ever. The directors version is... Badly edited.

Counterexample: Dune. The Alternative Edition Redux fanedit by spicediver is a lot better, despite being done on some dude's imac, than the "original."