I listened to this LP about 2000 times during the first years of my life. Since I worked the record player myself; it was soon covered in scratches and jumps - but never became unplayable. Whyton was a skiffle star of the 1950s, and in my early years he was a continuity announcer on the local Devon TV channel (Westward) - along with a cat glove pupper called Willum. 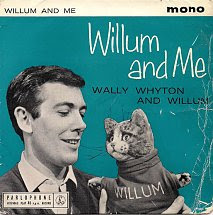 Certainly these are good performances, albeit in an American folk style. Note the sped-up mouse-voice songs - which could be played at 16 rpm to reveal Wally Whyton's normal voice.

When my kids were young, we had an excellent video of English folk style nursery rhymes - here is a sample:


Yes, that's (the great) Martin Carthy doing Over the Hills. And (the great) Shirley Collins...

Both collections are charming. I remember singing many of these when I was a child. When my son was a wee one, my wife used to play him an old record with comparable Hungarian nursery rhymes. What strikes me is once you learn a nursery rhyme as a small child, you never forget it. It stays with you your whole life.

We used to have a delightful cassette of Australian songs for children, lost when our car was stolen. The cassette not the children. For months afterwards my wife would visit car boot sales hoping it would turn up.

That record sleeve stimulates a vague memory of a character called Pussycat Willum. Could that be he?

Your memory must be better than mine, Francis. But fragments stick for me, some of them odd.


At some point I lost my ability to recite the lovely label on the HP Sauce bottle that told of the mélange d'épices - but that was after nursery age, of course. The abolition of that label was a symbol of the decline of our civilisation.

Two thousand times? That must've driven your parents to distraction!

Here's Copland's arrangement of "I Bought Me a Cat":

Funny how that Simple Simon tune kept threatening to become the tune that "Yankee Doodle" was based on.

Now my fallback for "Simple Simon" is Orff's 'Schulwerk' version: