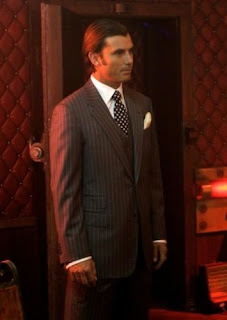 The Ahrimanic-style demon Balthazar from the (enjoyable) movie Constantine (2005)

If you do not already understand the distinctively 'Ahrimanic' nature of modern evil; then I think it would be time well spent for you to look-into this.


One quick and enjoyable way - which I wrote about a couple of years ago - is to study Screwtape Proposes a Toast (1959) by CS Lewis (PDF version here) - and indeed the character of Screwtape as contrasted with his nephew Wormwood in The Screwtape Letters (PDF here).


Throughout the Letters Screwtape is recurrently trying to reign-in Wormwood's naive, short-termist and (for Wormwood) personally-gratifying evil of tormenting, frightening and playing-nasty-tricks-on his 'patient'; but losing sight of the fact that the ultimate (and proper) goal of demons is damned dead souls, not miserable living humans.

By this analysis: Wormwood's is the old-style 'Luciferic' evil; Screwtape represents the modern, totalitarian, bureaucratic, soft-sell, incremental Ahrimanic evil - much less spectacular and obvious; but in the end much more powerfully damning for exactly those reasons.


In Proposes a Toast, Screwtape comments:

The quality [of Ahrimanically-damned souls] may be wretched; but we never had souls (of a sort) in more abundance....

We are tempted to say that such souls — or such residual puddles of what once was soul — are hardly worth damning. Yes, but the Enemy (for whatever inscrutable and perverse reason) thought them worth trying to save. Believe me, He did.

You youngsters who have not yet been on active duty have no idea with what labour, with what delicate skill, each of these miserable creatures was finally captured.The difficulty lay in their very smallness and flabbiness.

Here were vermin so muddled in mind, so passively responsive to environment, that it was very hard to raise them to that level of clarity and deliberateness at which mortal sin becomes possible.

To raise them just enough; but not that fatal millimetre of “too much.” For then, of course, all would possibly have been lost. They might have seen; they might have repented.


That is exactly the nature of modern Ahrimanic evil - it is pathetic in its passivity of evil-ness (it is evil minus the courage and motivation of great villains of the past); but there is such a lot of it!