The West failed the 2016 test: made its choice, and is getting what it asked-for

At the end of that year, I wrote a post called: 2016 - the year of ridiculous optimism. This built on the fact that around 2011, David Icke predicted that 2016 would be the crucial year, the beginning of a period of about three years when it would (at considerable cost and sacrifice) be possible for the world to turn back from the path of materialism, control and coercion being planned by the (demonically-motivated) Global Establishment.

2016 was indeed a crucial year on a world scale; and the first such since 1967. 1967 was when the New Left agenda began to dominate, and when the sixties cultural revolution began to shed its positive and optimistic possibilities; to turn towards corruption, top-down manipulation and bureaucracy.

But for some years following, the issue stood in balance; and there were some hopeful counter-developments - such as the 'distributist' self-sufficiency movement - with its yearning for a smaller scale, folkish and crafts-based, more human society.

2016 was the beginning of another, but lesser, period of possibility. In that year there emerged an increased clarity of vision, so that some people began to see what has happened to the Western societies, and what was intended for them. There was a chance to say No; and to take another path.

The nature of that alternative path was unclear even in outline. My understanding was (and is) that it was a path initially of spiritual awakening, specifically Christian awakening - and more specifically of Romantic Christianity.


Through the second part of 2016 I had (uncharacteristically!) intermittent intuitions of 'ridiculous optimism'; because it seemed that quite a mass of people, perhaps a majority, had reached the point of recognising the malign intention of the ruling elites towards them and their nations.

But following on; there was a strong, swiftly growing, backlash and counter-attack from the Establishment and its organs of government, education, law and the mass media; but at first this 'anti-populist' onslaught brought the repression out into the open and made it less easily deniable. There was a chance, it seemed, that the backlash might feed the movement it is intended to crush.

2017 and on was therefore a period of moral testing for The West. Pressure was increasing, so the period was limited.

There was (I believe) a chance to escape certain doom and take another path. But the different path would entail accepting - upfront - a considerable personal sacrifice in terms of material goods, comfort, convenience, etc.

The moral test was whether people were prepared to pay the necessary costs now, for the chance of a better future. The failure of this test would be when - by clinging to their addictions and distractions, by privileging the short-term - the masses would tacitly embrace the down-slide into despair, self-hatred and chosen damnation.

I concluded: "If we fail the test, as a culture, then we will (as a population) have no serious cause for complaint about what happens after."


Well, The West failed 'the test of 2017' and onwards, and seems - indeed - to have made little complaint about what has happened since... I mean the international totalitarian takeover, the near-universal curfew, state prohibition of most human activities, regulation of the permitted behaviours, and abolition of nearly all human contact, etc. Indeed, many of the masses insistently demand more of the same treatment.

So, it looks like people did reach a point of decision after 2016; and decided then that the Global Establishment was, after all, the preferred option; decided that The System was a benign force, working for human good; and that They should be trusted to do what was necessary and best for the mass of people.

And that is how the events of the past few months have been interpreted. People have rejected spirituality and Christianity; and are now getting what they then chose. 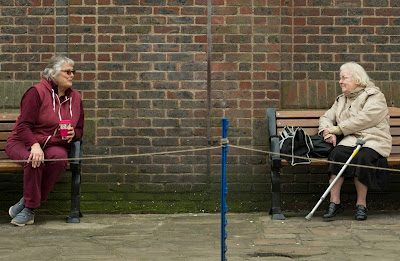 The photo at the end really infuriated me... How dare they go out in public without masks!

2016 or the end of was quite optimistic, surprising to the cynical but then came the obfuscation on both sides of the pond. In retrospect here, just how bad May was didn’t really hit home until the Chequers meeting.

Not to you maybe, but I always knew her for what she was. Met her type too often in the NHS and university systems.

Thing is, they are All bad; not a single one is even a decent person. Lying (and never repenting) does that to people.

If I assume your analysis is correct, everything makes sense. My Christian friends are unfortunately confused and debate silly things like how accurate the statistics are and whether or not some particular policy decision was implemented too fast or slow.

I’m not smarter than them, I just read your blog and am generally more “pessimistic” about how evil the world is.

You mean in paring down state power, tax base, subsidies, I assume.

Of course if your predictions come true, deprivation will collect more.

@ap - Well, the Establishment would not give up without a fight. And, as a generalisation, optimising the long term always means sacrificing the short term - indeed that's why people choose the short term, mostly.

But yes, we have already lost as much or more in the past weeks by imposition; but if sacrifice is chosen for a high goal then that's a different thing. Motivation is the thing.

This rings true, and if it is so (at least in its broad outlines), then it raises interesting metaphysical questions:

Premise 1) God is our loving Father, who would always create conditions which are most propitious to our growth and learning in Life (mortal and beyond).
Premise 2) God knows us very, very well indeed, meaning that I find it hard to believe that He would not have been aware of the fact that the chances of very, very large numbers of His children eschewing the Good in favour of evil, would have been crystal clear to Him.
Conclusion 1) Therefore, the doors to Salvation remain as open as ever, to those who want to cross them.

Question) Therefore, why is it intrinsically a "bad" thing for things to have turned out the way they did? If, no matter what, the most important decisions are as available as always?

I think that this is not a trivial question at all, and the satisfactory answer will probably depend upon our answer to such questions as

1) What is salvation, exactly? Do the existing qualities of the world you were born into, modify what you are "able to do" after passing through the gates of mortal death?
2) Is God interested in quality or quantity? I.e. if the current situation will cause a greater number of damnations than would otherwise have happened, but the few who accept salvation enter into the gates of Heaven with "bigger lessons learned" (because they were chosen under more adverse conditions), is that Good or not?
3) Is God´s power somehow limited? For example, is He capable of creating the best possible conditions for our growth (such as assumed in premise 1 above), but only out of "available resources", opening the door for some outcomes to be really mean that certain lessons will of necessity go unlearned by the children of men, and thus Heaven will be impoverished even if salvation is forthcoming to them? I assume that, as far as we are concerned, this is not this case (with God all things are possible).

The answers to the questions above will determine, in a sense, whether the fact that what "most people" end up choosing, "societal tests" being passed and such, matters or not in terms of it´s implications for the most essential questions.

"Not to you maybe, but I always knew her for what she was."

Do you think that she knows what she is?

I always got the impression that she was very weak in terms of self knowledge for a person of her age and experience - not as cunning and conniving as the really nasty politicians wwo know very well what they are. I even think that she would see herself as on the side of the angels.
I can picture her as a lanky, cartoon, simple looking, dray horse, with huge blinkers on dragging a dray full of broken policies and promises, and believing that she had done very well.

I have a personal bone to pick with Theresa May. I had a secretary in London who was the best I've ever had, by far. One day in early 1998 she told me, with no prior notice, that she was leaving us. She had been seduced away by May, a family friend, who had recently been elected MP for Maidenhead. Just to rub it in, my former secretary didn't stay with May very long - she didn't find the atmosphere of the Commons salubrious. With people like Blair and May around, that's not surprising.
But everyone in the UK, and every Anglophile everywhere, has a bone to pick with Tony Blair. He is one of the absolute worst of Them in our time, and did Great Britain incalculable damage. Not all by himself, of course, but Blair was the ringleader of a truly evil movement: "New" Labour.