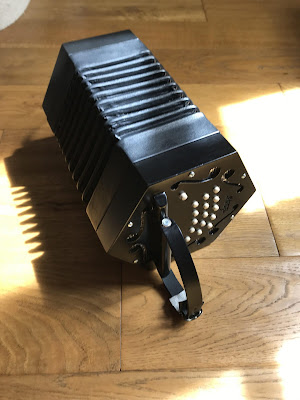 I have just bought myself that gorgeous little thing depicted above - a Stagi M5 Anglo-Concertina. For scale; it is hexagonal and about 7 inches diameter across the points, and expands to about 15 inches when the bellow are opened.

I have always (since age about 14) wanted a concertina, but instead I played different free-reed squeeze-boxes; the piano accordion because I could borrow one free from school; and later I got a melodeon, because it was similar to the accordion.

And at the time when I was keenest to get a concertina - there were only available cheap semi-toys, and very expensive hand-made or refurbished antique instruments.  "Intermediate" quality concertinas - such as the one I just bought - either did not exist, or were inaccessible.

You may think the melodeon experience ought to help me play the anglo-concertina because they are both push-pull instruments, giving a different note in and out - both use the same diatonic (major key) system of tuning of C and G rows (with assorted accidental notes in the third row to enable playing in some other keys).

And indeed each concertina row of 10 buttons in C or G is the same as the 10 buttons in each row of my melodeon except being arranged with five buttons going up the left side, and down the right side of the concertina - as if the melodeon's right hand buttons had been folded over and cut in half!

But I am actually rather intimidated by this little box! Because I have such a lot to un-learn - which is always much more difficult than merely learning. I am embarrassingly inept, considering the decades of similar experience. Everything I try to play - even the simplest scales or tunes - goes wrong...

It is already apparent that I will need to go right back to basics, and build a technique from the ground upwards. It's going to be a long-haul, no doubt.

That is the challenge - my new quest.

Beautiful instrument! Would love to hear a sound clip if you get around to making one.
Have you got any suggestions for me - 73 yrs old, guitar maker and player, who would like to take up an instrument like yours, but don't want to get burned by a cheap one?
Thanks

“Mama’s got a squeeze box
She wears on her chest…”
- Pete Townshend, 1975
Are you aspiring to rock ‘n roll greatness?

@HRS - Not Rock and Roll for sure - folk mediocrity more like. PS: You keep sending multiple identical comments...

I'm no expert on concertinas - there are some good online stores were you could get advice from people who know their stuff, e.g. https://redcowmusic.co.uk/. But there seems to be a bit of a shortage of instruments at present, presumably for the usual fake birdemic reasons. But concertinas come it two main types (Anglo or English and it depends what kind of music you want to play and what sound you are after.

Also, I think concertinas are harder to play than a small piano accordion or a melodeon (which cost about the same for the level of same quality) - so it depends on what you are after. However, for cuteness and portability, the concertina is supreme.

Greetings Bruce. I am learning thé button accordeon. An instrument completely different from the piano or flute that I am familiar with. An interesting Journey, that is also leading me to find some wonderful recorded accordeon music. Cop an earhole to Oliver's Cinema.
Best regards,
Mark

@MiM - I'm guessing you may mean the chromatic type of accordion that has about five rows of buttons on the right side, 120 bass and chord buttons on the left side, and gives the same note on push and pull?

I've never seen one of these IRL (they are top range instruments, I gather), and they aren't often used in the folk music I play - but remarkable virtuosity seems possible on them, presumably because having buttons instead of keys (with more notes close together) makes for new possibilities.