What about the Muggles? The three kinds of people 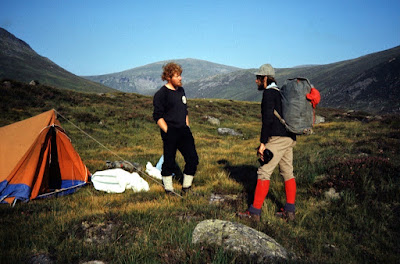 Bill Ryan (on left) in 1976 as an Outward Bound instructor supervising a five day expedition through the The Cairngorms, Scotland
(I was behind the camera)

I was browsing the Project Avalon Forum yestereve, looking at some threads concerning (a friend from the late 1970s) Bill Ryan, its founder.

(Bill was the man who recommended and lent me Robert M Pirsig's Zen and the Art of Motorcycle Maintenance - which had a big and positive effect through my early adulthood.)

In a thread; Bill discussed the idea that there were three kinds of people on the planet - a small minority of Good-affiliated/ 'awakened' people, a larger minority of those in service to the evil globalist establishment - these being the two sides in the spiritual war.

And then there is the third group, by far the largest, the majority whom Bill jokingly termed Muggles.

The perspective from which this three-part division was derived was broadly gnostic-Christian; in that it accorded a primary position to Christ, but in a philosophical framework derived from the dead Sea Scrolls and the Nag Hammadi library.

This is not my own understanding - nonetheless, the simple division brought to mind this question of the spiritual status of the spirit-denying/ spiritually-insensitive Muggle majority - especially in this post-international-totalitarian era.

The useful-idiot Muggles generate the wealth and do the work upon which the Establishment parasitize. The useless-eaters are regarded as a waste of resources; and the plan is to keep them docile in the short-term and eliminate them - as soon as (deniably) possible.

Spiritually speaking, however, it is the Muggles over whom the spiritual war is being fought.

From my perspective; the awakening are the real Christian, who are 'saved' because they have decided (at least as-of-now, but this may change) to accept Jesus Christ's offer of resurrected eternal life - and who therefore the their lives in that context. They naturally want as many as possible of the Muggles to join them in Heaven, because the more (and more various) the inhabitants of Heaven - the bigger, and better - more loving and divinely-creative it will be.

The Establishment want as many as possible of the Muggles to reject Heaven, to live and die in fear, resentment and despair; and therefore eventually to adopt the value inversions of purposive evil and affiliate against God and creation.

Meanwhile, the Muggles become less and less spiritual, more and more mundane and materialistic in their perspective. Indeed the mainstream 'evil plan' seems to be that the Muggles will in the short-term regard themselves as purely material, and therefore become controllable by material manipulation - but once attained, they will be induced into an inversion of Christian spirituality, with an inverted value system which sees Heaven as evil, and will therefore (with open eyes) deliberately choose their own damnation.

In other words - the two minorities are engaged in recruiting Muggles to their own sides; the difference being that (as of now) the evil side is doing so by pretending that there is no spiritual war, and that the sides are therefore purely material - ie. socio-political.

This is Leftism in its many facets, which now wholly occupies all the mainstream of politics and public discourse. There is only leftism in mainstream public life - whether that Leftism self-labels as socialism, feminism, antiracism etc - or self-labels as conservative, republican, libertarian, fascist or whatever: all are Leftism, all just parts of the anti-God mundane-materialist ideology.

Leftism is (in essence) the dominant Establishment anti-spiritual ideology for the Muggles; which opposed the (variously defined) 'awakened' real-Christian spiritualties on the side of God.

I was interesting to see that Bill's positive suggestions were not all that different from mine - although differently conceptualized. He regards the main spiritual work as clear and true understanding of the situation in this mortal life on earth.

And the 'method' for positively influencing Muggless being primarily that of 'morphic resonance' - by which is meant that true understanding and good intent in 'awakened' individuals will have a direct beneficial effect on the mass of individual Muggles - especially insofar as there is any serious intent to understand on the part of specific persons.

In other words; although the awakened try to communicate truth and Goodness to other people by speaking, writing etc; the primary and most powerful way that things work is by a direct influence of a spiritual (invisible, imperceptible) kind. And some of the spiritual warfare is aimed at trying to disrupt such direct influence - eg by attacking the awakened via seeding confusion, spreading doubts of reality, and encouraging fearful-insecurity.

In sum - I was surprised and pleased to find myself broadly on-the-same-side with Bill Ryan and the Project Avalon grouping - despite innumerable difference of understanding and tactics. And this was encouraging! If indeed such very different assumptions and methods can converge onto essentially the same set of basic 'answers' and attitudes, then 'we' are stronger than I had previously suspected.

I've always thought the great elephant in the room of much religious and political discourse is the sheer indifference of the vast majority of most people to anything other than their wallets and gullets. It's why in Dante's Inferno their's is the most populous and yet dramatically uninteresting region at the very beginning of Hell.

The way I think about it, an individual who commits to Heaven in this life can begin to "lay up [...] treasures" there, making lasting contributions to Creation. Such a person becomes a potential "bridge" from the Muggle world into Heaven. This bridge may be found by people who love the person (family, friends) or by those called to the same Spiritual Country.

You spoke the other day of visions of Heaven. Since Heaven is not homogeneous, but a "house with many mansions" or a world with many countries, many unique pictures of Heaven are possible. An "awakened individual" whose head, heart, and hands are working toward Heaven can, by that work, contribute another bright beacon for a Muggle to follow.

This work includes hidden prayers and other acts of love we make for others. After death, all that was hidden shall be revealed, and Muggles will have a clear choice to make.

If a Muggle finds the way in this life, they may contribute beacons of their own, and in this way, the Spiritual War is a pressing matter. In another way, waiting until after death to make one's decision for Heaven potentially squanders the possibility to learn many important lessons in this life, which may be of great value in Heaven.

Another great series of posts, Dr Charlton. Thanks. The recent ones seem tailored to my current needs (or you've captured my intellect!).

This particular post brings to mind the concept of "wu-wei". The spiritual influenece you speak of seems to be an effective emmanation from someone who is centered on God. But of course, I may be mistaking you.