The Eighth Narnia Book - an essay by John Fitzgerald 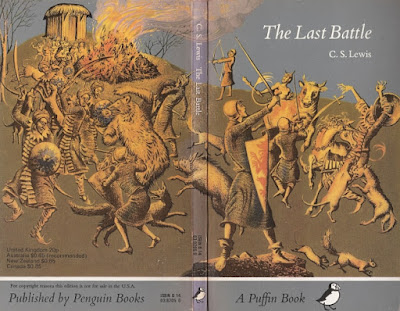 "Before I'd even read a word of Lewis I had stood enchanted in our suburban South Manchester bookshop, captivated by the cover of The Last Battle - the bonfire, the stable, Jill's bow and arrows, Eustace's sword, and the mighty red lion emblazoned on Tirian's shield."
***

The early-1980s, in Britain, felt like an especially intense time to be a pre-adolescent.

It was an era of style and colour, but also of riots, recession, and the ever-present threat of nuclear catastrophe. A local newspaper ran a series of articles on Nostradamus, and I was convinced that the end of the world was at hand.

I also believed, at that time, that there existed an eighth Narnia book, not a continuation, nor fan-fiction, but something on an altogether different level - a secret, hidden text that contained the essence and magic of Narnia, distilling it into a story, like to the one that Aslan had told us in the courtyard, setting off in its readers and hearers a reaction akin to Jewel's in The Last Battle: 'I have come home at last! I belong here. This is the land I have been looking for all my life, though I never knew it till now. The reason why we loved the old Narnia is that it sometimes looked a little like this.'

I was certain that before the final conflagration took place this book would reveal itself and make its holy yet homely presence felt in the world.

I hoped and prayed that I might be present when it did, and often I would imagine our school's classrooms and corridors dissolving and giving way to the stone passageways, cavernous halls and lantern-lit chambers of the Grail Castle itself.

In a tiny chapel, I was sure, at the top of a spiral staircase, the Grail and the eighth Narnia book stood between the candles on the altar, waiting for the appointed hour - the Kairos, the supreme moment - to roll around at last.

More at:
http://albionawakening.blogspot.co.uk/2016/11/the-eighth-narnia-book.html
Posted by Bruce Charlton at Friday, November 25, 2016