A Child's Christmas in Devon 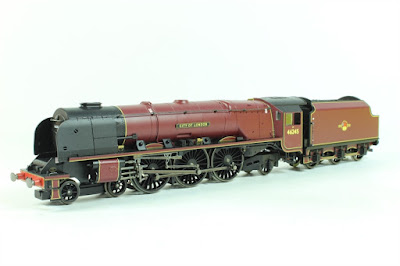 I was born in Devon and left before I was five, so my memories of Christmas are a superimposition of those of a very young child of several ages - hence wholly magical.

The impression is of coziness and warmth, colour, richness, food; happiness and a sense of total fulfilment - complete happiness. Of being given everything I could imagine.

The last Christmas is slightly clearer. I can recall being forbidden to go into the garage for a couple of weeks before the date - and on Christmas morning I discovered why. My Daddy had made me a trainset, the track and transformer fixed onto a large piece of hardboard - with a circuit and siding; the beautiful train illustrated above, with coaches and trucks.

This was certainly the most lavish present of my childhood; and it survived for many years - I still have the battered remains of the train itself. It was also perfectly timed, in that I was in the midst of a craze on steam engines - a few of which were still running at that time: I had the special treat of a ride on one of them shortly beforehand, and recall initially being terrified by the size, noise and smoke of its approach to the platform.

A particular favourite were the books (and recordings of books) by the Rev W Awdrey, such as the following, which I remember well (and I still posses the original and very scratchy EP):


Christmas in Devon is merely the epitome of a whole set of magical memories - memories of the primal state of Men - of Original Participation; that is, a world in which I was immersed and to which I wholly belonged.

A world which lacked the existential fear that soon after arrived, when I arrived in a new and strange house and school, then soon after began to realise there was a thing called death.

My 'earliest' recollection, I don't know if it was my first memory but it certainly feels like the first, was of finding a toad with a fatal head injury, apparently it had been shot with a BB gun or something. It wasn't yet dead, but I was quite certain it would die soon enough regardless of what anyone did for it. I was familiar enough with the concepts of injury and death to have no difficulty making that assessment, I do not recall any memory in which I did not understand the idea of a fatal wound. What stands out to me about this memory, what makes it memorable, is that I had not previously encountered meaningless death. And that in a particular sense. I could not understand any reason someone would bother to kill a toad. The head wound did not seem accidental, but the intention of causing it escaped me. I was not so distressed as confused.

The reasons to kill things, and the basic ecological mechanics requiring death as part of the life cycle, are prior to all my memories. The difference between living things and non-living things, and the turning of one into the other, are predicates on which my conscious awareness is founded.

Of course, the fact that I always understood that even insects and plants were "just as alive as myself" is really an admission that I was without the intuitive cognition of what it really means to be alive. I have not come to it yet, it is something that one has or one hasn't. But at least now I know that there is something nearly every human and probably most chordates understand about being alive (and thus about death) which I cannot.

I think that's what you're describing, the feeling that "it's good to be alive", even prior to the awareness that there is any other possible state of affairs. I believe this preference is something deeper than mere survival instinct. A common housefly has as much survival instinct as any human, but I've never seen evidence that it meaningfully enjoyed being alive, only that it had an aversion to dying.

What dawned was a recognition that my family would die, and the fear that it might happen at any moment.