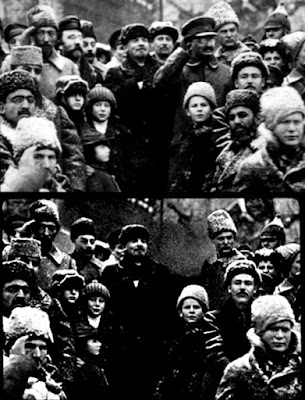 Is the Russian Revolution itself being subjected to the same airbrushing fate as Trotsky and co?
Now you see them, then you don't...

So, the 100th anniversary of the Russian Revolution - probably the greatest disaster in the history of humanity - certainly of the past century; has slid-by over the past few days and the media response has been - (all-but) silence.

The current younger generation know essentially nothing about the Russian Revolution - certainly they don't realise that in terms of human death, leave aside intensity and duration of deliberately-inflicted suffering, it was incomparably the worst regime in history.

Not least because the USSR was so extravagently praised and promoted by so many powerful and prestigious people in Britain, France, Italy, Germany the US and elsewhere - and so widely and devastatingly emulated in further communist revolutions worldwide.

Plus it led directly to the reactions of Italian fascism and German National Socialism - hence (among other things) to World War II. No communism: No fascism. No Lenin: no Hitler.

But that didn't happen - which seems to suggest that that the evil Global Establishment has decided that the best strategy is to continue to pretend that communism never happened; or at least to keep the whole thing vague and dull and distant.

If They want to 'airbrush' the Russian Revolution from history - then the least that Christians can to is the opposite: keep reminding people about Soviet Communism: including what was quantitatively by far the most vicious and sustained persecution and extermination of Christians in the history of the faith.

Hardly anybody knows about this - and fewer are interested - and the communists did not keep records of their dirty work, as the Nazis did; but the faithful remnant of the Orthodox church - and Solzhenitsyn - collected a great deal of data.

The Russian Revolution is a very big thing to try and shove down the memory hole; but in this current media/ distraction-addicted era, to obliterate from consciousness the biggest and baddest event of the twentieth century is all in a day's work.

The horrors of fascism and Nazism are well-known and are actively and widely promulgated in politics, education, and the media to the point that even the most ignorant members of society possess at least a dull awareness of this history. I do not object to this; these horrors must be acknowledged. Yet, as you note, a massive blind spot exists in the West when it comes to communism. Despite the efforts of writers like Solzhenitsyn, despite countless eye witness accounts and terrifying personal testimonies, and despite the massive body count, the terrible legacy of communism has not ignited the same levels of condemnation in the West.

On the contrary, many celebrated intellectuals and thinkers were or are professed communists and either enjoyed or continue to enjoy rewarding careers in academia or in the media despite their admiration or support of the Marxist cause. Some, like Slavoj Zizek, have built entire careers on the foundations of Marxist apologetics and obtuse French Marxist psychoanalysis. You can talk about communism as a viable political option at any Starbucks without drawing too much objection from nearby tables. And of course, no hipster wardrobe would be complete without at least a few items of clothing featuring Comrade Lenin, a red star, hammers-and-sickles, or Che Guevara. Stalin does not inspire the same depths of scorn that Hitler does. In a phrase, the swastika has, deservedly, become taboo, yet the red star continues to dimly glow in the sky.

This has bothered me for decades, and I have approached the issue in some fiction I have written. The only conclusion I have been able to reach thus far echoes the spiritual insight Dostoevsky made in his prophetic novel Demons (also translated as The Possessed or Devils) – communism is demonic in origin. That communism’s horrors are wilfully ignored, that it continues to plague humanity in some form or other, and draws only superficial levels of criticism when it is criticized at all, reveals the unwillingness of many to exorcise this demonic force.

@FB - Well said. That is the whole thing in-a-nutshell.

In England it is acceptable to promote communism to school children - this play train is located near where I live (Wallington Hall) - if you look on the left you will see the hammer and sickle. http://www.greatbigscaryworld.com/the-best-childrens-play-equipment-in-the-world/ This is 'in honour' of the fact the the last aristocrat to own Wallington was a communist (also a Labour party MP and utterly selfish all-round scoundrel).

Another example is a recent children's 'poet laureate' Michael Rosen, who is a proselytising communist and sponsored to go round preaching this to schools: https://www.newstatesman.com/lifestyle/religion/2012/05/michael-rosen-confessions-accidental-communist.

The point is not just that a swastika on playground toys would could an outcry, and schoolteachers etc are not allowed to be members of even legal English Nationalist Parties. But communism is praised all over the place - in colleges, festivals, conferences etc. Consequently (for the first time) the Labour Party Leader (Corbyn) is a commnist (Trotskyite) and lifeloing adherent of the Socialist Workers Party and supporter of their front organisations - he came very close to becoming Prime Minister earlier this year.