The children's Nativity story needs to be rewritten (with a bigger and more important role for Joseph...) 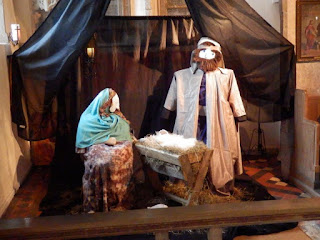 Joseph as a dummy! - Nativity scene from Backwell Church, Somerset - I attended the linked Primary School

I hope it is not only because (ahem...) I myself performed the role of Joseph as an infant; but by ignoring the true status of Joseph and misrepresenting circumstances of Jesus's birth, the standard Nativity Play introduces an error and bias which, for most Christians, seems to be lifelong.

Jesus's was the legitimate son of Joseph, and Joseph had a strong claim to be the rightful King of the Jews by lineal descent - that is the meaning of the detailed (different) lineages given in Luke's gospel (at the baptism of Jesus) and Matthew's gospel (at the opening); and by the many references to Jesus being born 'of David's line) and being King of the Jews (after Joseph had died).

Therefore the Nativity story should begin with Joseph - living in exile but not obscurity; well-known to be the 'true' King of the Jews; and working as a skilled craftsmen of the 'middle-class'.

In other words, the story needs to establish that Jesus was born heir to this claim to be the real King of the Jews; and in this sense already famous at the time he was born.

In other words, the common notion and depiction of Jesus as born-into poverty and obscurity is absolute nonsense; and makes the Gospels incoherent - when we find, at the end of Jesus's life, the Jewish and Roman authorities treating Jesus as a potentially very dangerous political threat.

That was plausible; on the basis that Jesus was heir to the Kingship, and could plausibly have rallied a revolutionary army to restore him to his rightful political position --- quite apart from - and in addition to - Jesus's various blasphemies, breakings of The Law, the possibly-demonic/ dead-raising (necromantic) miracle; and his denial of the legitimacy of the authority of the Jewish people's existing priests and rulers.

Joseph is necessary to set-out the proper framework for understanding the life of Jesus; and that should especially be reflected even in the simplest account of The Nativity for kids.

Uh...but it was more than twenty generations from David, and more than ten since the lineage had been acknowledged as kings. I mean, I probably have closer connections to royalty than that. Royal lineages tend to produce plentiful branches, it's one of the perks of being royalty.

I do feel that the lineage is important, but not rare.

Jesus also said "that God is able of these stones to raise up children unto Abraham." I do not deny the possibility, but more than that it speaks to Jesus' own views on the subject.

What is more important, to my mind, is that Joseph received from God a vision such as not one king in a hundred saw, and followed that vision as not one king in a thousand would have had the courage and faith to do, and was entrusted with a mission that no earthly king before or since was ever found worthy to undertake.

We truly should not minimize the importance of Joseph's calling and service. But I cannot help but feel ranking him by his genealogical connection to a kingly line of decidedly mixed quality does just that. He stood above all of them together in God's esteem and honor.

And the worldly powers really did fail to recognize that. This is not an element of Christianity to be discarded easily. It is especially important to counter the modern disease of celebrity worship, now more than ever we should refuse to believe anything about the worldly fame of Joseph that the scriptures do not explicitly say.

Nor do I think that it is wrong to focus on the fact that his profession in life was one that the world today sees as relatively menial, for all that the "elevated" work of deciding and declaring what others ought to do is necessary, it is done badly more because of those who seek it as an honor greater than the actual doing.

@CCL - Surely what matters is how the Jews *of the time* regarded Joseph's claim to hereditary Kingship. They regarded it as strong.

This is the essential disagreement I'm pointing out, how or why the Jews of Jesus' time justified their rejection of Christ does not matter to us in the least.

What should concern us is why and how we might be tempted to reject Christ.

Among the gravest dangers to us (and I do not say it was no danger to them) is excessive (or really any) concern for worldly perceptions of 'legitimacy'.