William Blake and the depth of our error 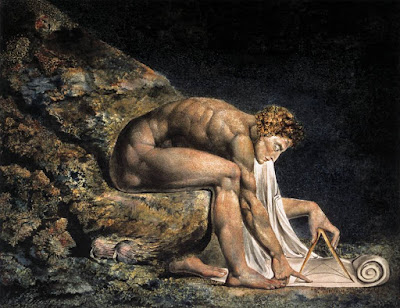 To read William Blake's work with sympathy, with empathy - as I am currently doing - is to discover an exposure of cultural error of far, Far greater depth and extent than is currently acknowledged almost anywhere.

The way of thinking that Blake excoriates has been given so many names - reductionism, positivism, scientism - but if considered as system thinking, or thinking in terms of abstract models, then it is pervasive among intellectuals as far back as history goes.

The thing is... modern culture is so familiar by Blake's kind of insight that people are bored by it. Presumably they regard 'system' as unavoidable - and certainly it is necessary to civilisation. We know it, and 'know' that nothing can be done about it - so we would rather not think about it.

But with system comes the absolute necessity of alienation, compulsion, the use of men as functionaries, the degradation of men to something much less... To accept system to to accept all this. To accept system is a fundamental statement of human priorities.

And with system, generation upon generation, cumulatively - as system becomes bureaucracy, all bureaucracies link, and bureaucratic system expands into every corner of life, in finer and finer detail - monitoring and regulating and defining thought - comes loss of our true selves (replaced by selves which serve the system, or react-against it).

Comes the destruction of any possibility of a true relation of our-selves to reality...

And comes a frantic state of distraction, of displacement activity, of despair and of a state of inner deadness that is almost indistinguishable from death - Man as walking dead: Man as zombie.

Hardly any individual - and no group or institution - stands outside this corruption. The Christian churches were apparently overcome by system not long after the death of Christ, and all modern churches are systemised, massively, too.

System has, indeed, infected and swiftly overcome all movements intended to expose, critique, or destroy system; such that all 'escape routes' merely loop-back-into the system... such are the temptations of power.

(This we see in the counter-cultural radical movements of the 20th century, many of whom embraced Blake as a hero - somehow ignoring that Blake's work is saturated in lived, experienced, primary Christian sensibility. Because Blake rejected Christianity as system - they supposed that he rejected the primacy of Christ!)

But system is not inevitable, it is not a part of the human condition, Blake depicts the opposite to system in his works, and it is not just attainable - but natural to everybody. Instead, we persist in a metaphysics which generates system, we persist in asking questions that presuppose system, we assume system almost as our first assumption - then lose sight of this primary assumption...

If Man's future depends on discarding and going beyond system-thinking, as Blake assumed and I agree; then we have a long way to go before we reach a point at which such a colossal decision could be made and held-to.

But we can glimpse such a situation in the work of Blake - if we are prepared to approach it empathically and individually; and not merely to re-systemise it...

The phrase "system-thinking" is very telling.

The purpose of any system is to avoid having to think. It corresponds to the measure of technological advancement as the number of things that you don't have to think about anymore. But such advances come as the result of someone carefully thinking through all the likely possibilities in advance, and the technology must be maintained by carefully examining all the ways that the inevitable unlikely events break things down.

Simply, systems cannot think, they must be thought. And valid thinking about a system cannot take that system for granted, because the system is a conclusion of thinking.