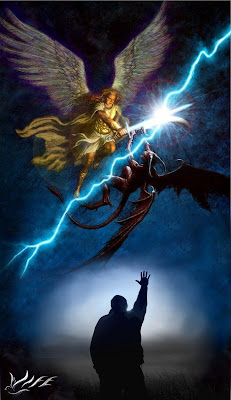 What are the barriers that tend to prevent us from living in primary thinking and achieving final participation?

The answer is partly interference from modern culture - partly its unprecedented number and pervasiveness of distractions, but mainly its materialist, anti-spiritual, anti-religious metaphysics. This means that any inklings a person may have of the reality of primary thinking, or experiences of final participation, will typically be interpreted in subjective terms - and therefore as an ephemeral, unreal product of wishful thinking.

But another factor is that primary thinking requires consciousness; it is not merely a matter of 'instinct'; therefore we cannot 'relax' into it, but must attain it purposively and actively. The typical spiritual guidance tends to recommend a passive process along the lines of the sixties mantra of 'turn on, tune in, drop out'- or a meditation practice which is negative and aiming at assimilation with the divine, rather than a conscious participation.

On top of these, there is the near-totalitarian dominance of modern culture; especially, in recent decades, via the mass media and social media; on top of the shallowness and mutual exploitativeness of most social interaction in an age where public discourse is actively hedonic or crushingly bureaucratic.

The combination - in the wider context of generalised Christian apostasy - can be interpreted as a triumph of purposive evil; in other words, that demonic powers are largely in control of the world, especially via the most powerful and influential global (especially Western) institutions. And, once this spiritual fact is sensed (and perhaps especially when it is consciously recognised) it may create a variety of counter-productive reactions.

For example the response may be despair in face of such (apparently) overwhelming power. Despair is rightly described as a sin - because it is a denial of the hope (and promise) of Jesus, and a surrender to evil.

Or, a realisation of the scale and nature of evil may alternatively lead to the mistake of 'fighting' evil on its own ground, and with the enemies own weapons (such as mass media propaganda, or political organisation).

Whereas the proper response is to recognise the presence of evil in our own hearts, and to regard our own soul as the proper battle ground; and to 'fight' on the divine grounds of ultimate universal reality - in other words, by primary thinking to participate in God's work of creation.

This is exactly what the vast apparatus of evil is trying to prevent us from doing - for them, almost anything else is preferable to you or I doing this.

Even one single solitary individual person attaining final participation via primary thinking for any length of time; represents a colossal set-back to the agenda of evil. Furthermore is is an ongoing defeat of whose origin they are not aware, and cannot become aware - because it is intrinsically Good and its level of operations is invisible to, far above and beyond the possibility of demonic perception.

I would finesse the point of evil's understanding that a person is partaking of the divine nature by saying that, while it is impossible to comprehend God's mind without participating in it, it is generally apparent to the evil (embodied or not) when a person is deeply immersed in eternal truths.

That is to say, that one can expect attacks, but all those attacks will be aimed at baser motives rather than higher ones.

But never forget, the basest of all motives is that which pretends to be the highest when you are under its influence, that is to say, pride.