What is the 'cosmic' Christ? 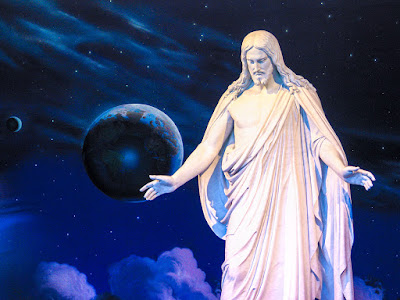 I find it useful to think of a 'cosmic' aspect to Jesus - which ought to supplement the more usual aspect of 'revelation'.

By 'revelation' I mean that Jesus was an historical personage, who emerged from a lineage and a prophetic tradition of the 'Old Testament' who left record of his life teachings in The Gospels, and this is expanded and interpreted in the later parts of the New Testament...

But the incarnation, death and resurrection changed the structure of reality. The divine creator of earth became a man, died and was resurrected; and that changed reality. The universe before and after Jesus was a different universe.

That is the 'cosmic' Christ; and it does not depend on revelation. It happened: everywhere and to everybody and everything.

What happened? Well, should not look for a complete answer in a brief-statement form (when the universe is changed, a lot happens!) - but a part of it was that the cosmic Christ enabled Men to become fully divine eventually - and in this mortal life to experience - if we choose - the divine mode of consciousness.

The divine mode of consciousness is what I have termed Primary Thinking, what Rudolf Steiner sometimes calls the Imaginative Soul (coming after the Consciousness Soul), what Owen Barfield calls Final Participation and the highest level of consciousness described in William Arkle's A Geography of Consciousness.

This means thinking-from our real (which is divine) self; an activity that has direct knowledge of reality, and participates in God's work of creation (it is what Tolkien called 'subcreation).

That is (an aspect of) the Cosmic work of Christ.

I remember that when I was very young (preliterate), most abstract nouns were accompanied by very specific mental images. "World" for example, was associated with an image of a rainbow. "Devil" was a young man with curly black hair, laughing. "Miracle" was dark clouds with an orange sun shining through. "Welcome" was (oddly, but explicably) a Hopi kachina doll. "God" was this statue.

A kind of synaesthesia, perhaps? A phenomenon much commoner than realised - probably quite natural and spontaneous.

(Interestingly, this phenomenon was mentioned on a recent episode of the Big Bang Theory sit-com that I watched yesterday, by the 'genius' character Sheldon. Some kind of synaesthesia seems very common among creative geniuses - indeed, I would expect this; given that creativity comes from a greater domination of thinking by the 'inner'.)

I know where some of these come from. The "miracle" picture was on the cover of a book by parents used to read to me, which explained how many things worked and then ended each explanation with "...but you wouldn't understand that, so to you it's a miracle."

The "welcome" image came from the children's song "Book of Mormon Stories," specifically the line "Lamanites met others who were seeking liberty / And the land soon welcomed all who wanted to be free." I heard "welcomed all" as "welcome doll" and, perhaps because of the "Lamanite" context, pictured the Welcome Doll as a particular kachina doll I had seen in a book called "The Indian Book." Even now the word "welcome" sometimes conjures up the image of that doll.

I suspect most synaesthesia originates in similar long-forgotten links. There was a study a few years back on how many cases of color-letter synaesthesia can be traced to the color schemes of alphabet fridge magnet sets.

Your name, Bruce, by the way, is associated with the image of a dark-faced man in long blue robes. Ages ago my dad had two colleagues he used to talk about, Bruce and Val; I never met either, but for some reason mapped both names to the same blue-robed image. I have no idea where it came from.

@WmJas - I expect something like that explanation is correct about synaesthesia - at least, most of the time.

I know somebody for whom very specific shades of a colour are linked with individual-people (not their names) - another famous example of colour synaesthesia was the composer Scriabin.

With reference to my name, up to about age six or seven, I felt a connection with anybody who shared my name. I didn't know many, but there was a motor racing driver called Bruce Maclaren, and an 'entertainer' Bruce Forsyth. And of course Robert The Bruce (as you probably knowm Bruce was a *Norman* surname... spit).

In my teens Monty Python did a sketch about stereotypical outback Australians called Bruce; and from then I had to suffer being quoted excerpts of this sketch (and/ or the accompanying 'philosophers song') every time I was introduced.

But nowadays there are loads of world famous Bruces - so I seldom even notice the name - certainly I don't favour it.