Beams and Motes: The problem of repeated failure to live by our basic assumptions 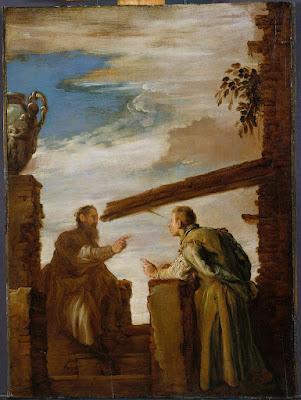 
I was reflecting on Owen Barfield's shorthand term of RUP, meaning Residual Unresolved Positivism, by which he pointed out that those who accurately diagnose the spiritual malaise of modernity nonetheless continue to live-by positivistic, materialistic, reductionist, scientistic assumptions - and this comes-through again and again in the person's thinking, writing and actions.

One example Barfield gave was Jung, who said and wrote many contradictory things - Barfield diagnosed the root of this problem as partly the persistence of many positivistic features of which Jung seemed unaware; plus Jung's compromising wish to communicate-with and be-valued-by a positivistic world.

We need to be aware of such matters - because the thinking, writing and doing of most writers and philosophers of the modern condition is likewise compromised - and we need to avoid being misled by this. To avoid absorbing their confusion and errors, we need to distinguish the points where other-people are failing to live consistently by their most considered assumptions.

However, the mote in the eye of another is easier for us to acknowledge than the beam in our own eye; and all of us who are trying to move beyond alienation and materialism into Final Participation are only-partially successful (at best). Most of our thinking is not primary, but automatic; and our alienation is often relieved (temporarily) merely by lapsing into the passivity and unconsciousness of Original Participation rather than actively, consciously, thinkingly moving-forward.

The answer is not to aspire to eliminate 'positivism' - because that is not possible - but to learn from the RUP problems of others to diagnose, to notice and acknowledge, our own inevitable, frequent deficiencies.

In other words - we should probably not be aiming to attain perfection of Final Participation as a powerful and permanent state - since this is (at present, for us) impossible; as to recognise and repent our own failures to do this.

This is, indeed, the core Christian response to our own weakness and corruptibility.

A Man's mortal life is trial, error and repentance - with repentance the worst sins are washed away, without repentance the slightest lapse or deficiency may be enough to damn us by a pride-full insistence that we have not erred: thereby such error becomes built-into our self-understanding.

Gotta point out this mote here, "Our new and improved metaphysics may simply be an aspiration; our true belief (that which we live by )"...is that which we expressly condemn (is what I guess it's supposed to say).

My problem is not so much that I find it easier to see other's motes than my own beams but that nobody wants to hear about my beams. Not people trying to be good, and especially not people trying to pretend goodness while actually being bad.

The only people who have any real patience for hearing about my beams are people who are so perfect in wickedness that it wraps around and becomes justice in God's sight. That's a very narrow audience. It always makes a clerical confession peculiarly funny if I don't reign it in and cast my sins in a less theologically challenging perspective. I try to pull back at the "I'm not sure I want to understand what this guy is confessing" stage, but sometimes I take them to the point of "I'm sure there was something I was desperate not to understand, but since I now don't understand anything I can't remember what it was."

I'll admit that I'm a bad enough person to find both kinda funny, the first more in a bitter vein.

@CCL - It is probably psychologically harder to acknowledge the beams that other people point-out than the ones we choose to confess.