A gaseous Model of consciousness 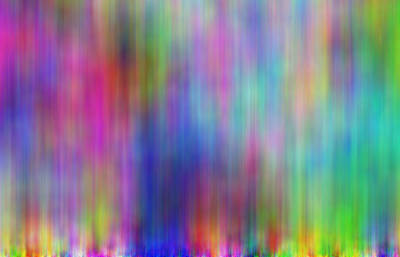 Regular readers will know my principle of rejecting physics-based ways of thinking of metaphysics... Here I break my own rule - as this notion popped into my head yesterday and I found it somewhat helpful. But bear in mind it isn't True - it's just a model.

My idea was that consciousness happens in a gas - and gas is unbounded and everywhere (except where it is excluded) - so all consciousness is intrinsically-connected over time.

I imagined consciousness as something like a dynamic pattern of molecules within this gas, creating a concentration that is consciousness.

The degree of concentration could be higher or lower, and could become greater or less over time. So that a greater concentration of consciousness comes from a greater and more-internally-communicating concentration within this extensive gas.

Where does this concentration within the gas come-from, and why is it sustained across time - when the tendency would be for any 'randomly-occuring' concentration to randomly-disperse?

This is 'why' the 'self' is immortal - why our souls or spirits are immortal, why some kind of consciousness is eternal. Because each concentration of consciousness has-been from eternity, has sustained-itself across eternity, each 'therefore' is indestructible and persists forever.

That is 'why' there is direct direct knowledge of everything (except where the gas is excluded) because each concentration is a part-of the universal gaseous medium, and has experienced the entire history of that medium.

This model (but just a model - not True, because Being is primary - not physics) seemed a helpful tool for (sort of) conceptualising some realities; so I thought I'd share it on the off-chance it works for someone else.

What is really intrinsically eternal is not consciousness, which is dependent on both the spirit and body (neither of which are innately ours, instead being gifts of God), but rather the volition.

The degree of consciousness that is supportable solely by spirit may well be compared to a gas rather than the complex patterned solids which we usually associate with bearing of information. Though the spirit is not conventionally like a gas in any way other than not being solid matter, it can be said with some certainty that it is even less like solid matter than a gas. In that specific sense it is more like a gas (from a physical perspective) than even gas itself.

In terms of consciousness, the consciousness of spirit alone is more primal and touches emotions without as much mediation by complex conceptual constructs, like the way we experience smell as oppose to sight or hearing.

Well, I think that it is an evocative comparison in some ways but overall it does have rather obvious limitations as a conceptual framework.

Well, I think it provides a useful approximation of how a pure spirit-being can sustain itself and maintain a sort of identity (if probably not a fully conscious one in the terms we understand it) that persists beyond material limits; as long as we are extremely clear that it cannot possibly consist of anything like matter as we know it; and particularly, that it cannot manifest in a remotely matter-like form within the physical universe. More than anything else, I think your idea actually works quite well as an aid to the visualization of what cannot actually be seen and is hard for most to even imagine.

I would describe it myself as something like a persistent background of latent universal potential (certain quantum concepts may be useful here, though I would be very cautious about introducing them and confusing the issue with physics where it is largely redundant, in a definitely extra-physical realm).

This potential is not anything definite of its own accord, and is essentially chaotic in nature. Its natural state is pure disorder, but it has the potential to gain a kind of order, either by the coalescing of random fluctuations, or by something more ordered acting upon it. Wherever it becomes ordered enough to maintain itself (and not instantly disappear again through more random fluctuation), a being of sorts can be said to have come into existence - formed, essentially, of primary chaotic material that now has reason to do one thing rather than another. Though not occupying space or being composed of matter as we know it, its components, having gained order among themselves, do interact in a coherent way geared to dynamic preservation of the existing order, hence the continuance of that being. This makes them roughly analagous (though very different in their actual nature) to bodily cells.

Will or volition in this model must be far more basal than actual consciousness, as the degree of organization required to know oneself to be (the measure of consciousness) requires a vastly higher level of order than simply being able to be, just as the nervous systems of higher animals and humans are vastly more complex than those of the simplest organisms, which nevertheless live after their fashion.

I think therefore that CCL is more-or-less correct; though I also think that such consciousness as can be achieved and maintained by a pure spirit being probably cannot be lost through Eternity, where there is no time or matter, and hence no entropy - unless it is either able and willing to will itself into dissolution (suicide) or God or another much more powerful being can do so (execution?).

God seems to be responsible for creating the material universe, establishing its purpose, and desigining the mechanisms by which beings were able to incarnate and develop within it in order to evolve to higher capability; and presumably was also able to self-order and self-create as the primary being prior to this; what is less clear to me is whether subsidiary beings such as ourselves were eternally co-existing as spirit-beings or are entirely the direct products of his creation.

CCL's view suggests to me a basic self-maintaining being, perhaps with a more primitive animal-type consciousness, endowed with greater capabilities by God as a prerequisite for incarnation as a human - but, nevertheless, still partially pre-existing in its basic individual will to exist, and eternal/uncreated in this limited sense. This seems plausible, at least. I may be interpreting what he said wrongly though.

I think that we can safely say of spirit that it is abstract as opposed to concrete (but not as opposed to specific or particular, except in relation to concrete objects), and thus all analogies describing it have to reject the overt literal implications.

I do not (cannot) believe that spirits are indestructible, as the volition must be. They are contingent on the action of God in making and preserving them. I think that it would not be entirely inexcusable to say that the spirit could exist as archived information known by God (this should be theologically incorrect, but not a heresy, since I do not believe it contradicts any genuine element of faith). The spirit does have created nature correlating in principle to the created nature of physical things, not just existing 'in the mind of God'. But I don't see any necessity to faith of believing that the physical aspect of Creation exists outside the mind of God either, though the belief that it doesn't certainly serves as an element in some pretty clear heresies.

I guess the fact that I don't even see particular beliefs about the nature of spirit as necessary to faith limits my inclination to expound a firm concept of it.

What must exist independently of the will or mind of God is volition. I think that it is not intrinsically problematic to suppose that the spirit ceases to exist except as a record remembered by God at death, as long as the volition is understood to remain independently existing, to be reunited with the recreated spirit later. This is contrary to doctrine, but not to faith (except by accidental association with heresy).

I guess the point I'm making here is that I consider the nature of spirit to be related to the metaphysical (meaning "on which physics is based") substance which extends the conscious perception of God throughout Creation. Thus one could think of spirits as either portions of that substance or as being partitions of it, that is "actually" separate instances of the same substance or designated segments of something actually contiguous. But the distinction would only be definitely meaningful to the degree that spirit was physical (while remaining irrelevant to the degree that it was not).

But the more salient point is still that I don't feel it's that important a point.

Fascinating coincidence: in a book I recently read, Miracle Monday by Elliot S! Maggin (in which Superman faces off against the devil), Lex Luthor unwittingly unleashes a demon into the world while escaping from prison via astral projection, having discovered that souls exist while experimenting with a new form of energy. Luthor called the material souls were made of 'gas-waves'.
- Carter Craft

Mummy With A Mouth said...

Great model, and reminds me of Rupert Sheldrake’s theory of morphic fields. I’m a new reader so I don’t know if you’ve commented on the morphic fields theory before. Thank you for your great work on this blog and best wishes.