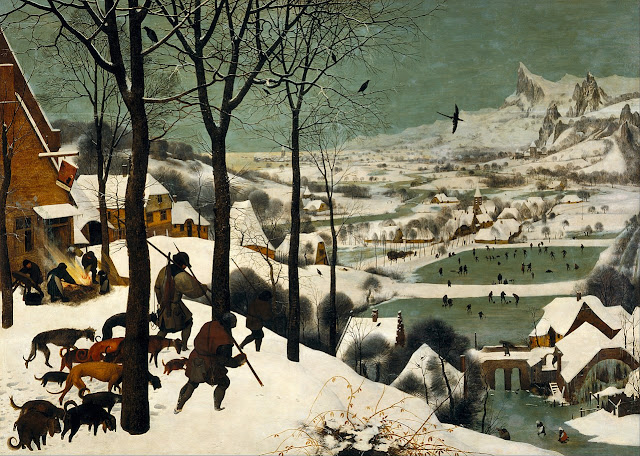 This was probably my favourite painting age about 18-20 years - exceptionally evocative of that sense of aching yearning, Sehnsucht, that CS Lewis termed Joy. After living from brief glimpses of the picture held in memory, I eventually found an affordable reproduction to put on my wall - it was actually some luxury wrapping-paper, purchased at Durham Cathedral!

At that time, and originally deriving from my immersion in Tolkien; I had an imaginative desire of 'Medieval' things - either original e.g. Gothic Cathedrals, Chaucer and his contemporaries) or in Revival (e.g. William Morris, Pre-Raphaelites, Carmina Burana by Carl Orff).

Although strictly this painting is a bit late for the Middle Ages, it has that God's-eye not-perspective which aims to depict the distance with the same detail as the foreground; and it was the distant, right side of this canvas that I found so very attractive.

I also liked the winter scene; since I associated it with being warm indoors beside a blazing fire; perhaps in the philosopher's tower of a castle (an image of Merlin from TH White's The Sword in the Stone). And the birds.

It strikes me now that the people are all anonymous, absorbed into the public roles: no 'characters' - and this doesn't appeal to me anymore. My tastes and hopes have changed. Then, I yearned for an earlier time of order, structure, guilds; and yearned to be the kind of person who could indeed live that way...

But that was a lack of self-knowledge, a fancy merely - because I am not of that kind. And have, indeed, spent most of my post-adolescent life resisting anything of the kind. I became a doctor - one of the last of the guilds, and now gone - but while I wanted to be a part of the profession, I was always on the outside and a mixture of unable and unwilling to join-in. The same problems applied to academic - earlier and more strongly.

And either way, there is now no real 'in' to join' - just the lies of public relations and the reality of bureaucracy. So it turned-out for the best, after all!

"Hunters in the snow" - ha, speaking as someone who actually did go hunting in the snow recently, I always get a kick out of you Englishmen and the way your "hunting" portrayals always involve dogs. Nowadays definitely not allowed to hunt in a semi-urban scene like that!

The "Hunters" is a wondrous painting. It's news from the real world.

@Matthew T - Much easier to hunt without dogs when you are in possession of modern weaponry which can be used to reliably take prey down from a great distance and minimizes the risk of wounded prey (especially larger animals) escaping. The other main alternatives which would have been available at the time are hunting on horseback which allows larger prey to be chased down; ambush hunting, which makes skillful use of the terrain and knowledge of the animal's habits; traps (so far as trap use counts as hunting); and poisons. In all these cases the use of dogs still makes it much easier to locate and flush the prey, however, and makes the hunt far more likely to succeed.

I have to wonder what you were hunting and how you were going about it, if you really think that the use of dogs in hunting has ever been as superflous as you seem to be implying, or for that matter has ever been any kind of specifically "English" trait. (This is a scene from an apparently not-so-low region of the Low Countries, by the way, and has nothing to do with England, past or present!)

Not all human populations that subsisted by hunting domesticated dogs (or any other animals). And it is true that many modern countries do not permit hunting near population centers, and some discourage or heavily regulate the use of hunting dogs.

To be honest, I also get a kick out of English portrayals of hunting dogs, though perhaps I'm saying that more sincerely. I think it expresses a hearty acceptance of the commonality between man and beast, both the hunting companion and the hunted. But in a sense that acceptance is an abstraction, the pre-human hunter does not have the idea of commonality between itself and the prey. Or maybe it should be said that it does not have the idea of categorical rather than particular distinction, right now I am hunting, but at any time I could be hunted, so too the prey. Without the human categorical outlook, the condescension is meaningless.

But I still find it charming.