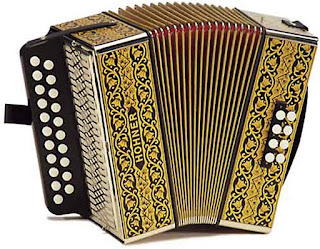 These days I am working on playing my melodeon - which is identical with the one above. I use it almost entirely to play English morris dance tunes. Melodeon is the standard instrument for accompaniment of morris dancing; and over the years many morris tunes have become adapted to the strengths and limitations of the instrument.

Ive had my instrument for nearly 20 years, but haven't played it very often; partly because my other, and 40-plus years of playing, instrument - a Hohner 48 bass piano accordeon - is sufficiently similar to interfere with learning the melodeon. The main problem is that the accordeon gives the same notes and chords on the push and pull; whereas the melodeon gives a different note on the push compared with pull - exactly like a mouth organ/ harmonica.

This video shows and compares the two instruments I play: D/G melodeon and 48 bass piano accordeon:


The melodeon is on the one hand a very limited instrument - which has two diatonic scales of D and G for the right hand and only four bass-chord buttons for the left; yet, on the other hand it has innate characteristics that make it ideal for morris dancing and folk music more generally.

For example, two pairs of bass buttons give the tonic on the push and the dominant on the pull; thus Dmaj push/ Amaj pull and Gmaj push/ Dmaj pull. This makes for a monotonous but drone-like accompaniments - which is 'bad' in classical music terms - but of course the drone is a major aspect of much folk music internationally (eg bagpipes and hurdy gurdy).

The other pair of left hand buttons (rather weirdly) are a bass-chord pair of Cmaj on push and also on pull (!); and a pair giving Bmin push and Emin pull. But the musicians among you may be able to work-out the logic behind all this...

The right hand of buttons gives a major chord on the push (e.g. G,B,D,G and D,Fsharp,A,D), and sounds the other notes on the pull (i.e. ACEFsharp and E,G,B,Csharp,) - which means that there are some notes that can be played in both rows, or on the push in one row, and the pull in another row - which is a way also of getting the required bass-chord to sound from your left hand. Plus there are a few accidental notes at the bottom of the right hand buttons...*

Any-Way! The point of all this is that the melodeon can be played such that the left hand side provides an almost automatic, albeit drone-like, tonic-dominant accompaniment to the right hand - and as such, the melodeon is one of the easiest of all dance instruments to play effectively and acceptably. But there are also possibilities for using the subdominant and relative minor root-notes and chords for variation or to play in minor keys (or, more likely with English folk music, to play in different modes; such as the Dorian mode running - e.g. and equivalent intervals - from D to D on the white notes of the piano).

The special quality of the melodeon is first that has a large range and it is surprisingly powerful for its small size. The treble buttons have two slight off-tuned 'vibrato' reeds per note - making a penetrating sound; and the bass is very 'meaty' in quality. So despite being easily portable, the melodeon can be used without amplification for accompanying even outdoor dancing:


Also, the instrument, played well, has a built-in bounce; which comes from the push-pull way of working it - this chap does this much better than the player in the previous video:


And this aspect of the melodeon playing is what I am working-on at present. I'm trying to use the push-pull as a feature, not a bug. Not to try and smooth-out the production of sound - as one would do for classical music; but instead to use the change in direction of the bellows to do what it is 'wanting' to do anyway - which is to make the music bouncy, jerky, uneven, pulsing.

This bouncy-jerky style is almost the opposite of what I have done with my little piano accordeon over the years - and is probably what has made it so difficult to switch between the two. So I am leaving off the piano accordeon altogether for a while - and trying to learn the push/ pull sequences by muscular memory...

BTW: There are some virtuosi of this kind of melodeon - and they can do some remarkable things!


But my personal aim is just to be able to play some of my favourite English dance tunes, for my own amusement; quite simply, but with that special melodeon bounce!

* One endearing aspect of the melodeon emerges when a tune has significantly more push notes than pull notes (or vice versa) - which happens quite often when a melody is based on arpeggio formations. The tendency is that the bellows runs-out of air, and the instrument closes-together with no more 'push' left to sound the notes (or else extends so wide that the bellows can expand no more). When such a situation approaches, the alert player has an 'air' button on the left had (controlled by the thumb) which lets air into, or out-from, the bellows without sounding a note. What it does sound-like is the instrument drawing in a great gasping breath! - or else exhaling with a whoosh.
Posted by Bruce Charlton at Wednesday, November 21, 2018

Thanks for this; some interesting stuff (both in the linked videos and your text) on an instrument I know rather little about.

The way it is used reminds me quite strongly of the traditional/medieval use of drone instruments to accompany dancing, particularly the hurdy-gurdy and bagpipes. I have to say that I prefer these instruments (with reservations), but the Melodeon still seems like quite a worthwhile modern variation on the theme. I wouldn't think that its limitations are really going to be all that hampering in this context (after all these instruments are if anything even less flexible). What seems more important is that the player has an excellent sense of rhythm and timing (not so evident in the second video!), and perhaps enough creative, improvisatory ability to prevent the music from becoming too repetitive or stodgy. I'm guessing that the ability to improvise minor variations is necessary for advanced players?

It might interest you to know that the accordion family is rather popular in many parts of South America, and is often used for more mainstream popular genres than seems to be the case elsewhere. The very popular Brazilian forró, of which even the most modern varieties seem to consider an accordion more-or-less essential, is a good example of this tendency. Besides the tango-associated Argentine Bandoneón (of which you have probably heard already), the South American instruments are usually piano accordions, though.

The button setup of the Melodeon puzzles me a little. I think I can sort-of understand what is going on with the bass buttons (set up to allow chords typical of the music for which it was designed to be conveniently accessed?) but there appears to be duplication of notes for the right hand buttons - is this correct, or are the notes actually in different octaves? And can the accidentals reasonably be incorporated into tunes at all if they are separated at the bottom of the row? (I don't really understand why they would be there, but then again button accordions are rather a mystery to me in general!) What keys can it actually play in?

@Hrothgar - For the right hand there is a line of buttons in D major and another in C major. Because the instrument is compact, which is because only four buttons are needed for the octave, players can reach most buttons without moving or stretching their hands very far.

@Hrothgar - There are a family of 'free reed' instruments - which originated with the 'English concertina' devised by the physicist Wheatstone in the Victorian times - who invented the free reed as a way of robustly producing a tuned note. There are two main methods of passing air across the reed - blowing, as with the harmonica/ mouth organ and the child's intrument melodica; and the rest have bellows (plus, I think there are or were some free reed harmoniums - set up like a small organ, reeds blown with a motor driven fan).

In Britain the squeeze-boxes are the English Concertina and Piano Accordeon, which give the same not push and pull; and the Anglo-Concertina and Melodeon which have different notes push versus pull.

There is also the hybrid button accordeon which is a multi-row melodeon for the right hand and a piano accordeon for the left hand. This was the instrument of the world famous Scottish player Jimmy Shand.

Hey great blog! I just got a melodeon, having had a beautiful piano accordion in need of repair for years, and not getting around to it, I decided to get a small box of some sort to get me started. Of course, I hadn’t factored in the push-pull pitch change. What fun!

I’ll be watching those vids with interest. I’m aiming to play tango at some point. Wish me luck.