Thoreau's Walden and the delusion of an earthly paradise 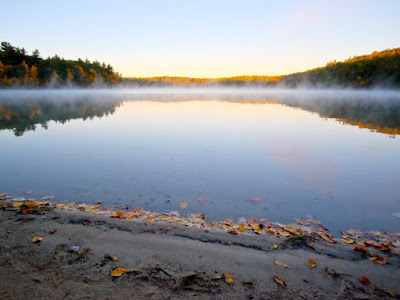 Not many books have affected me more than Walden by Henry David Thoreau - for me, it is one of the great essayistic prose works to which I return recurrently.

But it is also a book that helped create and reinforce a delusion in my life - and it seems to be a common delusion in many Western lives for more than a century: the idea that each of us can and should be able to live a life that is both continually-rewarding and objectively-satisfactory. Each of us ought to be able to find and make an earthly paradise...

In Walden, Thoreau uses his personal experience and writerly gifts to create a masterly and evocative account of one year in what seems to be an almost wholly-satisfying life - a life well-lived. And, what is more, this account went on to become a highly-respected and frequently read classic (albeit, Thoreau died before this happened).

As a young, romantic and alienated atheist, this was what I wanted to hear and needed to believe; that this mortal life could be made self-justifying - both on a moment-by-moment basis and overall. It seemed that Thoreau had 'proved' this. The next question was how to do this for myself, in my own life.

Such was the expectation - and I embarked on a simultaneous exploration of my own 'inner' needs and abilities on the one hand; and the 'outward' side and exploration of the world of music, literature and the arts for further ideas and possibilities.

When I discovered Colin Wilson's The Outsider just a few years later, I realized that here was another man on this same quest - since this book surveyed many lives in the same spirit of looking for examples of a life-well-lived; and Wilson announced himself as trying to complete in his own life what these had attempted in theirs.

But after the first flush of excitement; I gradually realized that Wilson's verdict on the lives and works of his exemplars was negative. And I gradually realized, from my own studies in biography - including Thoreau - that this was always the case.

A genius like Thoreau could create an artistic expression of the life-well-lived in this earthly paradise of Walden Pond; but he could not and did not himself actually lead such a life.

The paradise was an artistic artefact - not a human possibility; an illusion which led to a delusion.

And all this is very obvious to most people - I am unusual in that it took me much longer to come to such a conclusion (perhaps due to my unusual capacity for absorption in art, and my personal need); and I only reached it after extensive exploration and years of increasingly-failed attempting.

As is usual, the problem was my faulty metaphysical assumptions. I did not believe in God or a created world, I did not believe in Heaven. Hence I was engaged in the attempt to discover meaning, purpose, coherence and permanent value in a world that I had already decided could have none of these.

The ideal of a life-well-lived could only be a delusion because it could only, at best, last for the period while I was absorbed in a world where the artist was (in effect) God. So long as I dwelt imaginatively inside Walden; for so long I inhabited a purposive and meaning-laden world that the creator (Thoreau) had made - with relevance for my condition and addressing my needs.

But whenever I left this world, I would return to a 'real life' in which I had decided there was no real point or purpose. So the attempt at paradise became an attempt to fool-myself, to make myself feel as if my life was self-justifying; even though I knew (i.e. had decided) it could not be.

This is why I think it is so vitally important for us to recognize that this mortal life is not an end in itself but an education; mortal life is experiences of relevance to life eternal in Heaven, if we learn rightly from them.

As such a life-well-lived is a matter of learning from experience, we can and should set-aside the ideal of constructing for our-selves an earthly paradise.

That such is impossible was, indeed, the wisdom of the most ancient philosophers and theologians who have left records. They knew that this world was intrinsically one of disease, decay and death - a world of evanescence, imperfection and un-satisfactoriness; and that therefore its reason must be sought in its relation to some external world where 'entropy' (as we would call it) does not rule.

For Christians; this external world has been revealed as resurrected eternal life in Heaven; and it is this which gives real and permanent value to this transitory mortal life.

Thus we can recognize our imaginations of living an ideal life in an earthly paradise as delusional; yet we shall not despair!

But instead see life as experience and learning and therefore always be full of hope... and indeed eager anticipation.

Unlike the earthly paradise; such is a wholly realistic and attainable ideal.

"I fully agree with you regarding Thoreau's Walden, but it leaves me with a personal problem. Is quietism the path for me or societal active christianity? I have just started reading Jacques Ellul and I am captivated, but he clearly advocated action. (See, also to put his admiration for Marx in perspective: https://ellul.org/ellul-and-marx/ ) Are you familiar with the theological writings of Jacques Ellul?"

Activism is - in 2021 - means engagement with the System; and that usually means some degree of co-option or corruption. Quietism seems also to be an obsolete strategy, since nobody is left alone to do their own thing in the Brave New World Order.

A mundane comment before musing on your deeper message: Walden was endearing to me in my youth, but I had occasion to re-read it in one of Thoreau's Collected Works a couple years ago. Boy, are you correct that "he ... did not himself actually lead such a life." Not only was he living on borrowed land knowing he wasn't going to be there long, he was constantly dependent on his neighbors, landlord, friends and "the kindness of strangers" for everything including food to eat. And he mentions each of these met needs in the book, all the while professing to be "self reliant", thus fooling us along with himself into thinking he had achieved something. As you say, he had good ideas... he just didn't practice them.


Of all the items in the collection, I found his travelogue "Cape Cod" to be the best: witty and interesting, pulling off the veil of glamour from old-time seaside living. It was fun reading.


There is great wisdom in your statements that: "As such a life-well-lived is a matter of learning from experience, we can and should set-aside the ideal of constructing for our-selves an earthly paradise. .... For Christians; this external world has been revealed as resurrected eternal life in Heaven; and it is this which gives real and permanent value to this transitory mortal life. .... But instead see life as experience and learning and therefore always be full of hope... and indeed eager anticipation."

It is because of this hope and eager anticipation that I've reached a rather stoic approach that, by the Grace of God, seems to work well for me: accepting what comes and finding the best in it, learning along the way. Someone, sometime said something to the effect that none of our learning is ever wasted: all the knowledge and experience we acquire on earth with come to good use and fruition in Heaven. Holding on to that kind of thinking makes life and daily tasks here even more exciting and interesting. God is Good, indeed.

Are we then living in the endtime?
By the way, that is why I started reading Jacques Ellul, for his eschatology, finding C.S. Lewis, somewhat superficial on this subject (The world's last night) in comparison to his prophetical The abilition of man (and in a lesser degree That hideous strength). But C.S. Lewis was writing for people, who were already Christian and not for folks like me, who are on the threshold. The works of Jacques Ellul are somewhat difficult to find nowadays, both in French and translation. I start with his most readable theological work The meaning of the city (which coincidentally is recently translated in Dutch from the unabridged French edition), but my goal is his exegesis of the Book of Revelation. Ellul saw the whole Scripture (Old and New Testament) as a coherent whole, which makes him rather challenging to read for me as novice. By the way, he is more famous for his sociological studies (Propaganda, The technological society).

"Are we then living in the endtime?"

Yes - by my understanding of the term.

@jg - Yes indeed - Walden is from the early and transitional stage of rejection of Christianity when (for a creative genius, at least) the advantages have been ingrained during childhood and the culturally-sustaining patterns remain - but the lethally-demotivating relativism, value-inversion, evil and despair have not had time to develop.