Why I keep going back, over and again, to re-read Charles Williams 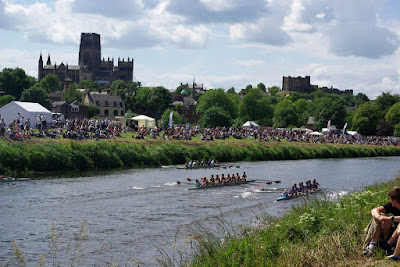 Durham Castle (University College) is the silhouette on the right (Cathedral to the left) and my rooms were located just to the right of the keep, looking out on this view

I have recently been re-reading some of my favourite Charles Williams bits and pieces - including what began my interest in this writer: Humphrey Carpenter's biographical account in The Inklings (1978). I would recommend this to anyone who thinks they might be interested, because Carpenter highlights Williams's most appealing and exciting aspects.

I recall first reading about 'CW' in my dark rooms located in Durham Castle one autumn morning; and being so energized and gripped that I dashed off to the university library to borrow some of his books. The included the Place of the Lion novel, Image of the City collection of essays and the Taliessin through Logres and Region of the Summer Stars poems.

Yet I have never appreciated the actual work of Williams as much as I did the biography, the idea of what he was trying to do; the fact that he lived this strange life in which the natural and supernatural were not divided - and in which the eternal and perfect forms of reality were perceptible behind the everyday and mundane.

For this reason - one of my favourite Williams books is the early (long since out of print) An Introduction to Charles Williams, by his friend Alice Mary Hadfield - since this gives the deepest and most vivid account of the best aspects of William's point of view on life.

However, after periods of immersion and when I attempted to live my spiritual life in a way modelled on that of Williams; I have ended in a very different place indeed. And I am much now more aware of the fact that Williams's ideas failed in Williams's own life: that he was always a deeply unhappy (even desperate) man, who consistently made (and doubled-down on) wrong choices.

Because (again and again) that which he most wanted at a surface level, and which he adopted as life-assumptions; was also exactly what hurt him the most profoundly. And as a consequence, made his own life worse than it needed to be.

This tragic situation (which lay behind the surface of success, charisma, and apparent spirituality) was mostly a consequence of CW's deepest metaphysics and most rigorously followed-through philosophical convictions.

So, you can see why Charles Williams continues to fascinate over such a time span, and draws me back recurrently to engage with his life and work.