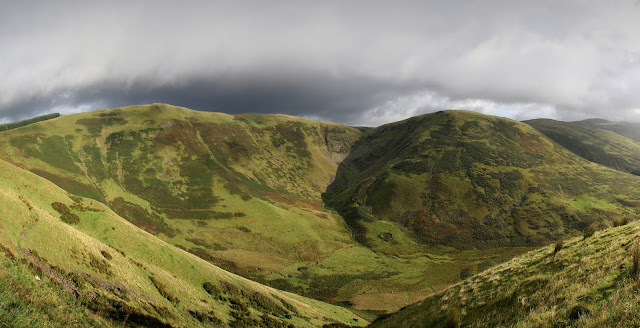 The Devil's Beef Tub - a powerfully-evocative hidden valley near Moffat

I was very 'sensitive' to country landscape in my middle and late teens, but this capacity was one of the casualties of my young adulthood - when I became city-orientated. It was in the summer of 1991, thirty years ago, that I began to recover - or re-forge - my capacity to know the mindscape as alive and implicitly conscious and purposive.

This happened through a series of explorations of the English-Scottish borders - which at that time I was approaching from the Scottish side (I was living in Glasgow). And the medium was a mixture of history and folklore.

In retrospect, what I seemed to be doing was to view the here-and-now landscape through a lens of a past in which I was personally involved, mainly due to the many ancestors who inhabited this part of the world. I was reading every book on the region I could lay hold of - gleaning whatever ideas and impression fed the magic.

At the same time as this retrospective angle, I felt that there was something occult (hidden but discernable) about this place which pointed to a better future.

This future was vague, but had to do with a re-integration of life and spontaneous-warm community - a kind of 'neo-pagan' aspiration for a life of more immersive engagement, although I was not initially aware of that term or movement.

At the time, and for long afterwards, I conceptualized this landscape sensitivity in terms of an immersion, an attunement; a lowering of barriers between my-self and that which the landscape contained.

There was therefore a sense of self-hypnotically reducing my conscious awareness of what was happening - but not too much; enough to 'liberate' the associative powers of the mind, but with enough consciousness retained so that I would be aware of, and then remember, what was happening.

This was a difficult balancing-act - and could never be retained for long. But such is mortal life...

This may all sound very theoretical, but it was effective - to a significant extent, sometimes. I was sometimes able to be in a kind of magical mood for considerable periods of time (a few minutes usually, up to an hour or two).

That it was objectively effective was evidenced by the synchronicity of these moods - I would move from one such experience to another; would move through the landscape from one discovery to another; discoveries not known, not seen, but with the inevitability of a dream and recurrent deja vu even for places I had certainly never been.

It was all very encouraging, but of course habituation soon sets-in and repetition of action loses its effectiveness; the experiences became less reliable, less intense, less frequent - and in general I needed to know what (if anything) they meant for me and my life. Or was it just a kind of pleasant delusion, a self-deception...

In retrospect I can see that I was recapitulating the search for Original Participation that was evident in neo-paganism as it developed from the late 19th century, and in the likes of CG Jung and Robert Graves; and indeed that was the direction in which my reading was drawn - for example I recognized the state of mind I sought as being Jung's Active Imagination.

It was evident that this quest could never be more than partially and dwindlingly effective and very intermittent. An activity for holidays, essentially. And an expensive one - meaning that I had to work at alienating jobs in order to achieve these moments of brief engagement and fulfilment.

Plus, they were solitary; and yet I was prone to loneliness and boredom.

And - most decisively - I recognized how much of this was me, was brought by me to the situation; and this undercut the experience, reduced and invalidated it significantly.

It was a paradox: one part of myself sought to engage in self-examination to try and exploit my own disposition and sensitivities of another part of myself! This splitting was sustaining the alienating divisions that I was (supposedly) trying to overcome.

It was a psychological equivalent of the split between work - needed to get the money (and car) needed to pursue these Border explorations; and the bought-leisure in which such explorations could proceed.

This struck me as not just a practical limitation, but a fault in the whole project; the whole idea. It was ultimately incoherent - and therefore not a valid basis for life.

I have now conceptualized this experience as Final Participation. It is not a 'recovery' of ancient ways of being or thinking; it is a moving forward to a new way of being and thinking, that exists in a new kind of thinking.

I recognize that I bring my-self not only this these magical moments; but to all moments - all meaning, and lack of meaning, comes from me; yet is not merely-subjective, because of God and because this is a creation.

All meanings, purposes, and relationships in God's creation always-have-been the consequence of 'minds', of consciousness - thus the integration of all things is a fact, not an aspiration.

What is an aspiration is the awareness; from which comes the magic, the enchantment.

Do you think the creative absorption and euphoria of artistic geniuses and so on is a form of Participation? I haven’t read enough Barfield.

@Epi - yes, it is a kind of participation - but what kind varies according (especially) to the era of history.

For example, the ancient Greek creative geniuses received direct inspiration from the gods, who spoke-through them (and they experienced this) in a very literal sense; this was an early type of original participation but that possibility faded through history - and even the Romans did not experience this kind of thing.