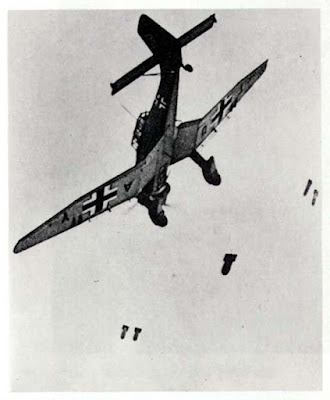 I am quite a fan of (although no expert on) World War II military aircraft; and one of my absolute favourites (which include the Mosquito, Beaufighter, Tempest, and F4U Corsair) is the Junkers Ju-87 'Stuka' dive-bomber.

I have always regarded the dive bomber as an under-rated concept, due to their much greater precision than high level, horizontal bombing. The Stuka could pick-out and (often) hit very small targets such as ships, buildings or groupings of troops. The dive bomber was best used as a form of directly-aimed, aerial artillery; or ground-attack craft.

The Ju-87 was the consummate dive bomber in particular because it was (I think) the only aircraft designed to dive vertically - which, of course, allows for maximum accuracy.

Its gull-wing shape, non-retractable undercarriage, air brakes and general robustness all helped make this possible. And a special bomb release mechanism ensured that they were released clear of the aircraft itself.

The pilots were a physical elite selected to cope with the extreme negative g-force on pulling-out of the dive, that drained blood from the brain and caused sensory distortion at least and often unconsciousness. Consequently the Stuka had an 'automatic-pilot' recovery mechanism to bring it safely out of the dive even when the pilot was temporarily incapacitated.

Supplementing the Stuka's operational effectiveness in precision bombing to support Blitzkreig, and for destroying specific targets on land or sea; was the fact that it was - by design - one of the most potent terror weapons of its era.

The aircraft was equipped with a very loud, screaming siren, whose pitch increased during the dive as the plane accelerated; and its bombs were fitted with whistles so that their falling would continue the auditory assault.

Depending on the morale and training of those against whom the Stuka was deployed, these sounds could greatly amplify its military value; as depicted in Christopher Nolan's Dunkirk movie.

In the UK the Stuka has an incorrectly poor reputation because of heavy losses in some of the actions of the Battle of Britain. The aircraft was indeed slow and - like almost all bombers - very vulnerable to high quality fighters such as the Hurricane and Spitfire - and therefore requiring a fighter escort.

Significantly, by-far the most prolific air ace of all time - indeed, the most highly-decorated soldier of the most efficient military of WWII - was a Stuka pilot.

An ugly, terrifying beast of a plane - supposedly obsolete even before 1939; it was nonetheless the supreme example of its kind.

I've only played the first couple of minutes, just before the commentary begins. Try it with your eyes shut and it's easy to forget that the sound is an old track. (Come to think of it, the Germans had tape recorders first.) Scary.

I first heard it in a documentary about Hitler-era German cinema, screened at USC in the late '70s at the behest of Cornelius Schnauber, the chairman of the German Department there. The sequence from a movie showed pilots of a Stuka squadron in flight chatting over their radios prior to attack. Then they break into the Stuka Lied. The audience was in stitches. In that context it played like something out of Mel Brooks.

And remember the scene in _The Battle of Britain_ (1969) when two English boys are casually arguing with each other over whether the approaching planes are Heinkels or Stukas?

Have you ever been to any of the airshows at Duxford? They have made some impressive shows with WWII planes.

I´m generally not very interested in engineering or machines but have always found airplanes, and trains, quite captivating.

I am a dive bomber. Whilst the primary missions of fighters I flew (Phantoms and F-16s) was air superiority, we had secondary air-to-ground duties. Dive bombing, usually through pop-ups from low level, was our preferred method.
The Stuka was daunting indeed, but if I’d had to be a WWII dive-bomber, I might have preferred the Douglas Dauntless, of Midway fame. My first choice, though, would be the Red Air Force’s Il-2 Sturmovik. Faster, more survivable, and about as accurate as the Stuka. The Wehrmacht hated it.

My close chum's father flew Corsairs in the South Pacific for the Royal Navy (he was Canadian) at age 19, toward the end of the war. He shot down 5 1/2 Zeros (one was shot down by two planes at once, hence the half credit). He died a few years ago. My chum has been trying for years to arrange a ride in a Corsair. What men these young pilots were!

Oh dear. That almost sounds like the time when my wife got the identities of a Lancaster and a Spitfire the wrong way around when looking at a jigsaw...

@HS - Much as I like the big US-made radial-engined fighters, the Stuka's capability to dive vertically trumps all other considerations for a dive-bomber - just as the Lightning's ability to climb vertically makes it my postwar favourite!

There was a US Army Air Forces study done on the Stuka right after the war IIRC that claimed that the Stuka - as a dive bomber - was greatly ahead of its time and no other contemporary dive bomber could touch it.

I think the modern incarnation of the Stuka is the A-10 Warthog.

@GFC - So it seems; and apparently Rudel the Stuka ace was consulted in its development, and Rudel's biography referenced as reading for the designers; presumably because the Warthog was intended to fulfill a similar role.