The eco-thriller - more merely double-negative heroics, leading only to a life ruled by fear then despair 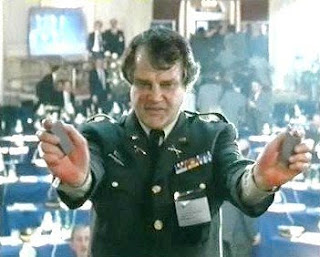 The eco-thriller - saving some-place or the world from an ecological disaster - is a subgenre of the disaster movie; but with pretentions of being deeper, more thoughtful, more idealistic.

The genre got going in the 1970s, I think; for example I have just read Raven (1977) by Jeremy Burnham and Trevor Ray; which is a modern Arthurian adventure for children, with the specific objective of saving sacred ancient caves from becoming a nuclear dump. 1985 saw a high impact adult TV drama called Edge of Darkness - again about nuclear waste contamination. The eco theme has since become a staple of Hollywood blockbuster movies, and B (or C) movies.

But - like everything else in modern culture; the eco-thriller tries to present a positive message from ingredients that are actually double-negative: the hero is not making life better, but is saving life from a threat.

Such double-nativity is, of course, the entire basis of all mainstream modern politics. There are now no utopians.

Consider the mainstream Litmus Tests - climate change is entirely about 'saving the world' from (what is asserted to be) human caused and harmful raising of the average global temperature - there is no positive message at all.

Antiracism (or feminism, or the gaytrans agendas) all claim (only) to be against negative-discrimination (or even, bizarrely, compensating for historical injustice) - and they do not even attempt to sketch out the kind of 'better future world' that they are supposed to be aiming-at.

And the latest and greatest left-mania of the birdemic-peck alleges its motivation to be nothing more than keeping (almost entirely) already-old and -sick people alive for a bit longer. There is zero consideration of what used to be the leftist mania of 'quality of life'. And any serious consideration of the adverse future consequences of this present policy is ruthlessly stamped-down.

We have arrived at a point where the world is ruled by fear, and must be ruled by fear, of death - because there is no positive, remotely-plausible better future towards which we must strive. Thus an already demotivated population is further reduced to mere survivalism; grasping and gripping at their few remaining 'allowed' pleasures and freedoms.

I do not contradict this pessimistic vision of The World, and this mortal life - it is a real thing. Of course, there is (for Christians) real hope, and the assurance of a (much) better future - but not in this world and mortal life; but on the other side of death, and only attainable by dying.

Here is another instance of the black and white nature of life, now. The world offers us only fear and despair; only Christianity offers us optimism.

Either we place hope in this world, which world does not even anymore pretend to offer grounds for hope - but rules only by ever-bigger sticks compensating for ever-smaller, ever-fewer this-worldly carrots. This can only end in despair - there is nowhere else it can end.

Or, we place our hope in the next world, sustained by determination to follow Jesus Christ to resurrected life in Heaven.

Here and now, there really are no other actual, living, motivation alternatives.

Yes, the last 11 paragraphs really are a perfect summary of the point. A point you've made before in less pointed ways, and that I've been sharing with those who will listen. It's very helpful to see it written this way.

Thank you for this! I don't think I've thought about the 'eco-thriller' enough in its distinctness. I remember the fact of The China Syndrome (which Wikipedia tells me "was theatrically released on March 16, 1979") and promotional clips and publicity attention and what not (I think I finally saw it later broadcast on television...). I still have not read the Strugatsky brothers' Roadside Picnic (which Wikipedia tells me was published in an English translation in 1977), and so do not know whether it fits the description or not. I wonder if Thunderbirds (1965-67) fit in here, at least some of the time - I never saw them till 1990s reruns and I certainly sometimes found myself thinking something like 'serious consideration of the adverse future consequences of some present "solution" of theirs is hair-raisingly ignored' (and wondered if this was irony on the part of the makers, rather than lunk-headedness).

With, for example, Lewis's Abolition of Man in the back of my mind, the propriety of "saving life from a threat" in such a mutable and finite 'worldly existence' does clearly require meaning and hope which transcend both this mortal life and any bogus utopianisms.