Life outside The System? 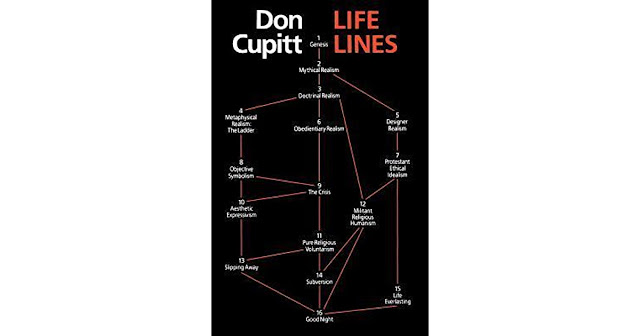 In 1986 I read a book by Don Cupitt called Life Lines - which purports to provide a complete typology, a map, of possible spiritual lives. It failed to do so, because its assumptions were wholly reductionist, materialist and positivist.

(The book's, the author's assumption were indeed, covertly typical of modern intellectuals, and perhaps especially those like Cupitt engaged in what they suppose to be Radical Theology; in that for them the bottom line of reality - that which was assumed but not argued-for - was the Leftist agenda. In other words; the moral concerns and impulses of then-current-Leftism are the only assumptions that are Not subverted - everything else is up-for-grabs.)

Life Lines was, indeed, a typical 'postmodern' book of that era - critiqueing The System, but - because its critique was based on System assumptions, in-the-end arguing that it was incoherent to suppose that there was anything but The System - there could be no escape, no opt-out - because there was nowhere (no coherent thought-space) to opt-out-into...

At any rate, this was a work representative of the assumptions and mood among mainstream humanities intellectuals over recent generations.

No matter how large, complex, pervasive The System becomes; we know what it is like to live differently. Of course, for much/ most of the time we are being propagandised, exploited, pandered, numbed and compelled by The System. But - unless we choose otherwise - we know with intuitive and experiential certainty - that there is more.

The role and function of modern intellectuals such as Don Cupitt and the other mainstream Postmodernists (such as Derrida, Foucault, Rorty, and the hegemonic theorists of liberalism, feminism, antiracism, postcolonialism etc.) has been to persuade us that what we know by intuition and experience is actually delusional. That the only reality is The System, and it is incoherent, ignorant, exploitative to assert otherwise.

The surface plausibility of this idea comes from the fact that The System controls communication and interpretation - so any writer, artist, musician (etc.) can (and will) be interpreted within-system - at least by 'authoritiative' and mass communications. The System assumes it is everything, and everything considered by The System thereby becomes a part of it.

As usual, the fault lies in metaphysics - postmodernists were/ are merely restating their own assumptions; they make assumptions, forget them, then rediscover them wherever they look - and take this as evidence proving their original (forgotten) assumptions...

Meanwhile, we - each of us - know differently. What is needed is (merely) a metaphysics that explains the validity of what we already-know.

I remember watching a TV programme presented by Don Cupitt sometime in the ‘80s or around then anyway. All I can really recall from this is my impression that he stripped spirituality of the spiritual, reducing it to an arid exercise in crypto-atheism. You can tell I had strong feelings about this at the time!

He certainly belongs with the other empty Post Modernists you mention in the post. They are people whose effect on thought is wholly negative for the reasons you eloquently state. Unfortunately they have a certain appeal because of their undoubted intelligence and ability to articulate their philosophy of death because that is what it is. They are excellent examples of the dangers of intellect without imagination.

Good post. I came across Don Cupitt and that whole 'Sea of Faith' movement in the 90s and was amazed that this was a theology that was supposed to be radical and exciting. I found it turgid, stodgy and dull. It felt like I'd been 'sold a lemon.' Things are better in Anglicanism today, I think, where at least there are movements like John Milbank's 'Radical Orthodoxy', which if at times a little over-academic certainly takes its stance from that Divine place outside the system.

As for Foucault, et al, their dominance in the arts and humanities in UK universities is bordering on the totalitarian. Like Cupitt's work, this is life-denying, despair inducing stuff masquerading as some sort of philosophical walk on the wild side. Tragic how many people have been and are being suckered by these fraudsters. 100% Screwtapian. Roger Scruton eviscerates them with real passion and firei by the way n his 'Intelligent Person's Guide to Culture.'

@William and John - At the time, I was very taken with Don Cuppit; indeed my first 'humanities' publication was perhaps a short account of his work in The Edinburgh Review magazine.

From within the materialist set of assumptions, which I held at that time and for many years afterwards, Don Cupitt is generally very rigorous and certainly a lucid writer. His main influence in the early 90s was late Wittgenstein, and I fell under that spell too - going so far as to apply for, and get a place at, Trinity College Cambridge (Wittgenstein's college) to read for a degree in Philosophy (I changed my mind, and did an Eng Lit MA at Durham instead - while still remaining in thrall to Wittgenstein).

However, shortly after Life Lines Cupitt alienated me due to his increasing embrace of the French postmodernists and Heidegger (just as they were going out of fashion elsewhere) and by his increasingly balatant and unexamined New Leftism.

I have a very different understanding nowadays, of course! But I do understand this trap 'from the inside'.

It is important to remember that the System does have other exits, including the legitimate reality of that sub-human animality which the System tries to paint as the only alternative to inclusion in the System by accession to the System's demands.

The System allows and even encourages escapes into the realm of mere sub-human animality on a temporary basis, or actually imposes them. College life in the U.S. seems to consist mostly of deadening the hope of escaping from the System by encouraging exploration of the spiritually vacant lands in that direction, the initial mandatory educational system and prison both subject the populace to dehumanization without escape from the System.

Of course, death is also an 'escape' from the System.

@CCL - Indeed, although the escape into sub-human animality is not a true escape, neither is death-as-annihilation - since 'we' do not escape, but are instead destroyed (whether temporarily or permanently) by cessation of consciousness.