Landscape then and now 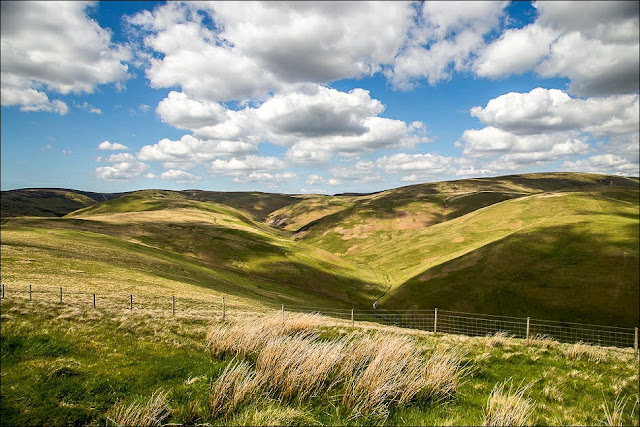 It was in the summer of 1991 that I developed a newly intense awareness-of, sensitivity-to, landscape - and that has remained with me. Certain 'views' and places evoke a powerful sensation.

The raw feeling has stayed the same, but my understanding or interpretation of this raw feeling has changed a great deal. Then I would muse on my genetic and cultural links to the place; and I would hope for some kind of real-world, material, and indeed political change.

In effect; then I was regarding affecting landscape, place, situation etc. as representing or signalling a means to some other end; a spiritual sign of hoped-for material change: change in my fortunes, economic improvement, a renaissance of culture.

In one word, the ecstatic feeling was secondary; and the base reason was that I was a materialist, and I believed only in that which was ultimately sense-perceptible, and I was sure that mortal life was the only life so my task was to have as pleasant a life as possible. Therefore, if evocative landscape was to have a real, rather than self-deceptive and delusional, value; it must therefore be some presage or hint at the direction some possible life change that would lead to my greater happiness.

(Later on, when I became interested in hunter-gatherer shamanism; I would try to sink-myself-into this feeling; to lose my self-consciousness by inhabiting it. This almost never worked! - or rather, if it did, then I would not (by definition!) be aware of its success.)

Now; things are different - partly in attainment, and more in aspiration. That same feeling is now grounded in an awareness that the feeling represents a reality; and specifically a reality in the realm of thinking.

Because I now have a very different set of metaphysical assumptions regarding the fundamental nature of reality; when I become aware of the feeling evoked by some place or situation and I am trying to interpret  and understand what is going-on; I have a knowledge that this thinking is a reality, and that there is a relationship between my-self and that which I am regarding - a 'personal' relationship between Beings.

I am aware that distance is irrelevant when there is a shared basis in reality - because that shared basis is the only direct and proximate and real form of sharing. I don't expect to understand what this experience 'means' in any specific or explicit way - but I know that it does have meaning.

This is quite distinct from the idea of an experience being valuable 'in itself' - because value needs a context or else it is meaningless; and meaning requires purpose, so that context for experience must be dynamic, a process, a narrative.

Now, my context is creation, and the primary reality is in what might be termed 'divine thinking' - creation is God's thinking, and our knowledge-of and participation-in God's creation is also by thinking - and not, therefore, by the actions of material bodies.

In sum; when I experience that ecstatic feeling from landscape Now - assuming I remember and am able -  it is not just a means-to-an-end but instead a permanently significant and direct experience.