Magic and ritual and beyond 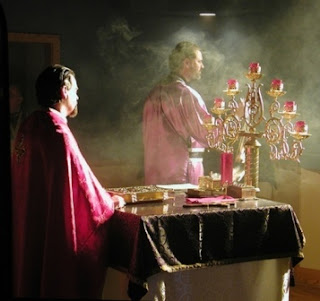 I have come to believe that the evolutionary developmental-unfolding of human consciousness is working against ritual - such that ritual has lost much of its interest, effectiveness and prestige.

Insofar as we do have rituals in modernity; they are done badly, because they are more like propaganda - at any rate, they do not provide spiritual attunement.

Of course, we might work for the restoration of traditional ritual - and that does have a role; but I think ritual never can again become the centre of a good life; as it was for so many in the past.

This decline is for bad reasons - such as cynicism, self-conscious embarrassment and short attention span - as well as for potentially good reasons such as theosis; but either way it seems we must increasingly seek outside of ritual.

Ritual can be seen as a way of focusing and attuning attention to attain a more predictable spiritual result - ritual is therefore intrinsically narrow; and intrinsically likely to fall into ineffectiveness, either from incompetence on one side, or habituation on the other.

Rituals can create a narrow strength and at the same time create new vulnerabilities - precisely because of this narrowness, and because of one ritual being vulnerable to another. This is known among ascetic monastics: intense monastic practices may increase spirituality in a relatively predictable and focused way; but they also open the practitioner to demonic 'attacks' to which normal people are almost immune. This is why ascetic practices are done under supervision and by apprenticeship - and even then, the precautions don't always work and the seeker falls into the damning state of spiritual pride.

My vision of the future is one in which the process of theosis is broader and more creative; and perhaps takes itself more lightly rather than trying to achieve divinisation 'by assault'. as among ascetic monastics. An awareness of the inevitability of error - trial and error, and the necessity for frequent repentance; a recognition that success will be infrequent and short-lived, but vitally important nonetheless... such an attitude seems appropriate.

Where then does strength and courage come from? From the actuality of direct relationships with the divine (e.g. Heavenly Father, Son, Holy Ghost) and with angelic helpers - and from solid intuitive affirmations of personal revelations.

What about when the questions and challenges arrive too thick and fast for such slow and careful methods to cope-with? Well, then we can discover (by the above means) general strategies for dealing with classes of problems - the mass media, propaganda, educational systems, law etc.

We are in a transitional phase - as usual; and rituals may still have an important role; but they probably ought not to be at the centre and making-up the core of a modern Christian religious life.

Ritual cannot serve as the center of a good life, but it does form a pivotal hinge or fulcrum.

The abuse (or absence) of ritual in life is a significant reason why it is so difficult to live well in these times. Faulting ritual categorically, rather than condemning particular corrupt practices, will not help restore the possibility of a balanced life.

One way to think of rituals is as a participatory enacting of the fundamental axioms from which all of one's purposeful efforts in life are derived. Stating the axioms is insufficient to the practice of logical inquiry, left alone, axioms are nothing more than dogma. One must apply the axioms to find out what they imply, and thus rituals only serve to establish what we take for granted.

There are two ways of taking something for granted, the common and vulgar pattern is to ignore that we have in fact taken anything, to posit that it is ours by natural right. The conscientious pattern is to acknowledge what we have been granted in gratitude and thanksgiving. This is crucial in logic, because to argue without expressing our appreciation for the common ground on which our effective argument is based is needlessly offensive, it pointlessly motivates disagreement rather than reconciliation.

In the most basic example, prayer should have strong ritual elements which structure the communication and remind us of our proper relationship with God. But the content of prayer also needs to be adaptable to the particulars of our current inquiries and entreaties. Thus formalized, ritual language is often used to open and close a prayer, as well as some particulars of physical posture or gesture. These, far more effectively than any internal mental effort, compose our spirit to an attitude of prayer, cognition of the nature of divinity and our relationship to God.

But if the entire prayer is set in ritual, then there is no room for prayer to give us any answer that should not have been set in writing in the (considerably lengthy) prayer book next to the prayer to which that answer should given. Nor is there room for us to consider the granting of an entreaty as a grace, if the entreaty were not granted, then we would have prayed the wrong prayer, in contradiction of the proper instructions of when (or by who) that prayer should have been offered.

A prayer that is nothing but ritual is pointless. But a prayer without any ritual is powerless, it is merely a cry at the moon.

Ritual, properly observed, establishes the metaphysical context of our other actions, it gives them more meaning and significance both to ourselves and to others and helps us remember why we do what we do. But the expression of why we do things must not replace all doing of things.