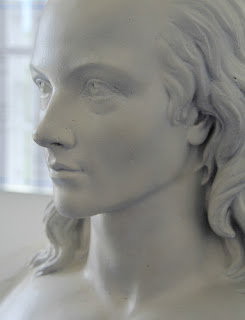 Novalis sculpted by the aptly-named Fritz Schaper - perhaps the most beautiful of great thinkers?

And indeed I misjudged the nature and scope of his achievement; since I assumed Novalis was solely a lyrical poet and romantic novelist - yet I know from experience that this kind of achievement is not translatable.

(I have tried and failed to appreciate lyrical poetry and poetic prose in translation so many times that I have ceased trying.)

Yesterday I felt ready - and discovered that Novalis was a philosopher, scientist and professional mining engineer who wrote on these - and all other - subjects for a projected Encyclopedia (lost for c. 150 years and only translated into English 11 years ago).

I then encountered some of his aphoristic/ 'fragment'-ary philosophical writings; and have seen enough to recognise that Novalis was someone who was embarked in the same cultural project as ST Coleridge; and that - like Coleridge - he was himself writing from a state of consciousness that had attained Final Participation (no wonder Barfield was so powerfully drawn to Novalis!).

After just a day, it already looks like Novalis will be joining my very small and select pantheon of those who (like Goethe, Blake, Coleridge, Steiner, Barfield, Arkle) significantly understood the single most-important issue of human developmental-evolution as it presents to Western consciousness.

So, which Novalis should I read first?

From two days worth of reading... Novalis Philosophical Writings - translated by MM Stoljar seems to have a lot of good stuff in it - including the famous collection of aphoristic 'fragments' usually called 'Pollen' - here called Miscellaneous Observations (for some reason). I'm also reading through Notes for a Romantic Encyclopaedia ed/trans DW Wood, which is fascinating.

Novalis's Miscellaneous Remarks (billed as "the original version of Pollen), as translated by Alexander Gelley, can be read online for free at https://www.jstor.org/stable/469045

(You can also download it at the exorbitant rate of a dollar a page, but it's short enough to read online. I've also created a PDF from screenshots which I'd be happy to mail to anyone who wants it.)

@William - I should emphasise that I am reading Novalis through the understanding I have derived from Steiner's GA (opus) 2, 3 & 4, and Barfield and the Romanticism Comes of Age theses. It makes simple perfect sense as such. But the people (literary types, translators) who write *about* Novalis make him out to be crazily complicated/ comnfused/ unrealistic.