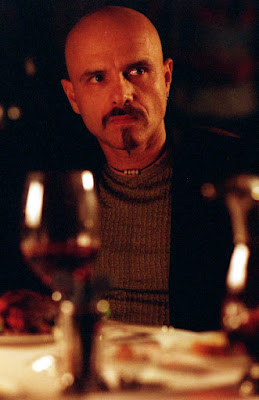 In The Matrix movie (1999) there is a character called Cypher who chooses to live a life of pleasant delusion plugged-into the Matrix, rather than to live in reality where there is considerable hardship, deprivation, constant threat. For Cypher, 'red pill' reality is wholly negative (bad food, sexual frustration - the only relief being intoxication), whereas 'blue pill' life in the Matrix simulation has at least some positive features.

Cypher is a representative modern Man - a normal member of Western society: which is to say he is a materialist and a hedonist: he lives to maximise here-and-now pleasure and minimise suffering. For him it is better to live a fake life than a miserable one; and if life isn't net pleasurable then it is better to be dead and oblivious ASAP.

Contrast Morpheus: he seems happy, is positive about real life, and feels no fear. Why the difference? Because Morpheus is not a materialist - he is religious, and because (therefore) he does not live for pleasure but for meaning and purpose in an ultimate sense.

Cypher's life is meaningless and purposeless - whether inside the Matrix or outside of it; therefore he prefers the most pleasurable option. Cypher is also a traitor, quite happy to sacrifice or actively kill his 'family' when that seems likely to brings him more pleasure... and, from his perspective, why not?

When life is material and evaluated by pleasure - as it surely is for most mainstream, modern, people in the West - then Cypher is normal, and Cyphers's morality the only that makes sense. The Cyphers of this world do not want reality, because the 'reality' they are prepared to acknowledge has zero meaning; and if they are forced to take a red pill and inhabit their version of real-reality then they will seek intoxication, to return to the fake work of delusions; or will kill themselves (since they believe that biological death means the end of consciousness).

The red pill is therefore only valuable to the religious; to those who acknowledge reality beyond materialism, life beyond biology. This is why most people prefer lives of mass media addiction, plugged-into the Matrix of the internet and social media 24/7 - and why they are purposively and by choice hedonic, immoral, intoxication-seeking, and prone to despair.

Yet, to be a materialist hedonist is itself a choice - a metaphysical choice; such people have decided to reject the possibility of meaning and purpose and real relationships. In a nutshell, they have decided that God is not and cannot be real - the consequence being that nothing is real (except current feelings- and these are transient). They have then closed their minds to having made this decision and claim it has been forced upon them by 'evidence'.

And no matter what actually happens, they will continue to believe that life is nothing more than materialistic, meaningless hedonism - and that anything which Neo does to save is just-a-coincidence... No possible evidence is ever going to be sufficient to persuade the Cyphers that they were wrong, are wrong, have made an error of assumption. No evidence will ever suffice because their primary (denied) choice to reject God is metaphysically-deep, and therefore that primary choice frames their interpretation of whatever happens-to-happen.

Cypher is the normal, majority, representative modern Man because he has chosen to make his actual life, and all possible lives he might ever lead in any circumstances, meaningless - and he is stuck in this situation, permanently; because he will never admit that this was in fact a choice that he actually made.

And yet, Cypher doesn't really believe it. His most crucial and emphatic demand is that he not remember his crimes.

He knows what he's doing is wrong and that he won't be able to live with the conscious knowledge of his choice.

At some level, he must even be conscious that what he's choosing is the second death, which is described in scripture as a lake of fire and brimstone symbolizing the final separation of the spirit from all righteousness, but is actually indescribably worse. The second death is actually death, real death, not the sleep of the mortal body that living beings fear by a mix of instinct and confusion about eternity.

But the idea of euthanasia has made a correct concept of the nature of the second death impossible to most humans. The key analogy is to a black hole, a Schwartzschild singularity. It is called a black 'hole' because the curvature of spacetime around it produces the illusion of an infinitely deep hole in space down which objects drawn into the singularity fall forever at a speed that approaches infinity (the direction of the hole is arbitrary, it looks like a hole oriented away from the point of observation). These objects are, in the process, torn apart by tidal forces that are eventually so great that they even destroy atoms and component particles by tearing them apart (which is one of several reasons black holes aren't really black). Ordinary calculation tells us that anything drawn into a black hole does indeed cross the event horizon at some point in time, but relativistic effects mean this cannot ever be observed from outside the event horizon.

The second death is like this, except in the reverse of perspectives afforded the outside observer and the victim. The outside observer sees the end of the process, but the person suffering the second death never can because of the loss of conceptual awareness of time and process, which are necessary elements of righteousness. To the dying spirit, there is no perceivable end, only infinite suffering unrelieved by any grace of God (such as forgetfulness of one's sins).

Cypher is making the classic error of thinking that the way to forget his sins can be found outside of admitting, repenting, and forsaking them. He wishes to live in sin while being distracted from his guilt...but that always has been impossible (it also directly contradicts the only possible motive the Agents have for actually keeping their side of the bargain, the use of Cypher as an example of what they can offer a traitor).

Making the knowledge unconscious won't make it any easier to endure. On this truth all competent therapy agrees with the religious approach. Cypher is trying to go back to sleep, but if it were that easy he wouldn't actually mind being awake. What he's choosing is spiritual death.