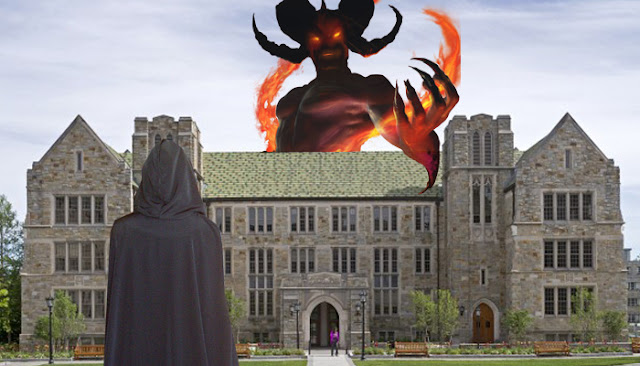 A lot of Christians (as well as those secular people who are opposed to politically correct Leftism) regard colleges as major agents of indoctrination - because they do indeed purposively aim to indoctrinate their students.

But colleges do a terrible - and inefficient and expensive - job at indoctrinating (just as they do at educating).

What the total environment of the modern (mostly residential) college does extremely effectively and efficiently is to corrupt its students.

And corruption (in its various facets) - is (from the point of view of those to sustain the system) the main job of college.

Think about it - from your experience: the typical college leaver is not well indoctrinated, but she has been (very obviously) corrupted.

The expensiveness, and consequent debt, is a feature - not a bug; since it creates dependence on The System which has done, and is doing, the corrupting.

Who exactly are these people who want colleges to be corrupters? Well, there are two groups. The first, at the top, are the demonic powers and those humans who serve them. The second group, at the bottom, are the great mass of people who want to attend college...

To a significant, and often dominant degree, those who wish to attend college, desire to be corrupted: that is, mostly, why they are going.

So there is a top-down with bottom-up collusion and collaboration in corruption. No wonder college does its job so well!

So - one can see why the system of 'higher education' is so robust, so supported, so defended; so large and still expanding!

Yes, thank you for stating something that has always seemed obvious to me, having spent 10+ years in the university system, during which I saw relatively little indoctrination (although some), but *plenty* of corruption.

You hardly ever hear this distinction properly made, and I expect the reason is that even many of our "right-wing" figures have been corrupted themselves.

It's all too bad because an institution devoid of politics and *actually* dedicated to Learning would be a very enjoyable and pleasant place indeed!

@Matthew - I'm glad you agree. It is, I think, pretty clear once the question has been properly framed.

And we must not forget the corruption of academic faculty as well - corruption was a rare (and obvious) thing when I began work (some 35 years ago) but is by now very nearly universal and therefore much less obvious.

I wrote about this from the persepctive of science in my online mini book Not Even Trying; but before that more generally in the Oxford Magazine:

"To a significant, and often dominant degree, those who wish to attend college, desire to be corrupted: that is, mostly, why they are going."

I differ on that point. Most of those who wish to attend college, at least here in the US, are too young to intuit what they will get there. For them it is largely a career move since so many employers now use a college degree as a gate requirement, fairly or not. Many of them may become corrupt but initially they, their parents, and the undergraduate grantors (I'm not absolving the lenders), are at worst enablers.

From the late 19th century to the present American universities have increasingly become glorified technical training schools for STEM students; these probably make up the bulk of the graduates who profit from their education. (And lately I'm told that even colleges of engineering and the sciences are under pressure to adapt their curricula to accommodate ethnic diversity and parity of the sexes.)

But yes, the scholarly disciplines have long been in decline here. Many who pursue them would not have desired to had they been born a century earlier. I think of a professor that Ashley Montague quoted in an article he wrote in the '60s. When asked how many students there were in the university he answered, "I'd say about one in a hundred."

The commenting is closed for the 2009 post of the Oxford Magazine article, so--

"Our discourse uses paper money inflated by hype and spin - like a ten dollar bill crudely stamped-over with a ten million dollar mark; until we no longer know what is accurate and whom to trust..."

Why the ten-dollar bill simile and not a ten-pound note? Just what are you implying? ;-)

Universities do a spectacular job of indoctrinating their students with whatever idiocy is current. But they simply don't bother to keep the talking points the same from one year (or even week) to the next.

Still, the lack of coherence and focus on a program of indoctrination does indicate the broader point, the aim is not indoctrination but rather corruption, and that is better served by having students and faculty alike forced to go along with and promote utter nonsense that they never heard before yesterday as unquestionable dogma, then pretend to have completely forgotten that they ever did so when it becomes inconveniently contradictory to some new idiocy they are supposed to spout.

This process rapidly breaks down anything like a commitment to core principles, let alone actual truth. It kills utterly the possibility of intellectual integrity, let alone honesty.

Twenty years ago it was confidently predicted by thoughtful and well-informed commentators (such as Martin Trow of UC Berkeley - who was a good pen-friend of mine) that the residential college was doomed - due to the internet.

But this didn't happen - and instead residential college expanded and became far more expensive in real terms. People insisted on spending a fotune to go-away to college, even though that college was worse, usually mediocre or low in standard, always corrupting in intent, providing an almost-worthless diploma.

Why - well, it wasn't because of the education - or the taught indoctrination; because the educational, teaching, examining etc side of college has declined (not least due to th eexpansion).

It is presumably the milieu of the residential college that has caused more people to pay more for less education - when there are cheaper and better alternatives.

It is the milieu that seemingly does the work of corruption (not the classroom) - perhaps esepcailly the recreational environment, the 'party' environment, the ethos of masses of young hedonistic nihilists living in close proximity and without much that they really have to do.

Therefore I am sure that there *must be* a very strong pull-from-below of students that *deniably* seek to be corrupted - they are aware that residential college is a semi-paradise for the nihilistic hedonist; and, being short-termists, they want exactly that and who knows (or cares) what happens after?

That's very true, the typical collage aspirant these days is positively desiring to be taught how to avoid the truth about themselves and their behavior, which is their real reason for promising a vast sum of money that they have no realistic intention of even trying to repay.

On can enjoy a hedonistic lifestyle for far less, and many have, but it will not come with so many solemn pronouncements of being a worthy endeavor that should be respected rather than reviled.