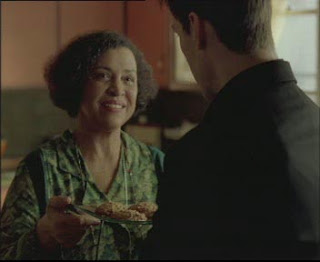 (NOTE: Many spoilers below.)

I have just rewatched The Matrix movie (1999) and I thought it was even better second time around. I had a memory that there was a flaw in that the martial arts scenes were over-extended - but (with the exception of the gunfight rescue of Morpheus) this is not really the case: there is something being told us with almost all of the phases of the various battles.

My impression this time around is that The Matrix is a really outstanding 5 Star movie; in which nothing goes for nothing - and where there is a very satisfying quality to the whole thing. I found it genuinely wise - in those parts where wisdom was aimed-at. The acting (and direction) of the principal actors is outstanding.

I was more aware of the spiritual dimension of the piece, too; there is an Old Testament like prominence given to prophecy (and the importance of prophets - ie. The Oracle). For Christians, there are several strong symbolic aspects (not necessarily deliberate - the authors aren't Christian), if we want to notice them: Morpheus as John the Baptist; Neo as Saviour who dies and is resurrected; Trinity (more loosely) as Mary Magdalene etc. But these I noticed afterwards, on reflection, rather than during. The end is not perfect - more than a touch of the inexplicit 'walking into the sunset' about it - but good enough to make the movie 'work'.

I think one of the aspects that helped me enjoy The Matrix more the second time, was that I set-aside the central nonsensical plot implausibility, which was apparently externally imposed on the film makers; of having the Matrix consist of human 'batteries' - their bodies providing energy to the Machines. Instead; I mentally-substituted the original conception that the machines were exploiting human minds and their computing power, and that an interconnected human neural network constituted most of the Matrix.

Having started watching the second Matrix movie; the sudden gap in quality and aspiration is very obvious. It's not that the sequels are bad - as movies they are fine - but that they are utterly different and at a much lower level of ambition (and therefore attainment). They also create the plot swerve and raggedness that makes it turn-out that Agent Smith is actually The One; whereas in the first movie it is unambiguously Neo - and this swerve destroys some of the coherent, satisfying, underlying, symbolism of the The Matrix.

Aside; I always regard it as a pity when a totalitarian dystopia is established by a 'fascistic' war and imposed by violence; whereas in this real world the analogous society is being incrementally and bureaucratically-implemented without significant resistance by the global ruling class; with the active support and cooperation of the linked bureaucracies and mass media. The real-world Matrix is actually-existing socialism; meanwhile the real-world rebels are characterised as Right Wing Reactionaries and enemies of individual 'freedom' (especially extra-marital-transgressive sexual freedoms).

Of course, such a truthful movie could never emanate from Hollywood, nor - specifically - from the makers of The Matrix. We have to make such adjustments ourselves, by our personal interpretative work.

Curious, do you pronounce "Matrix" like Bishop Williamson (in this excellent clip, starting about 7:30)?

@Matthew - No, he says Mattrix, I say Maytrix - I suspect he is giving the correct classical latin pronunciation, whereas the usual one is Italianate?

I hadn't come across Bp Williamson before - from this vid he seems like an honest man who thinks for himself!

Certainly The Matrix was a seminal film, and it was inevitable that the sequels would not live up to the original. I admit that the electrical vs computational power issue bothered me at the time, since then the refinement of both have seen something like a rough conversion formula starting to emerge, we can now say that the raw electrical power requirements of a given level of information processing capacity are a non-trivial (if continuously changing) constraint of what is technically possible for a given semi-conductor "process" (the combination of manufacturing technologies that go into a given integrated circuit). One can see it as all of a piece with the importance of access to analog phone lines, at this remove from the era.

The intensity and mercilessness of the assault on the police HQ with the Agents present does have a narrative purpose, though it may get somewhat lost in the extreme slow-motion detailing at times. The purpose is to highlight the moral consequences of the Agents' ability to take over any person who is part of their system rather than jacking in from outside. This necessitates a no-prisoners approach to minimize the window of opportunity for an Agent to suddenly join the fight. While the ability is described (and shown) previously, the moral dimension of every 'civilian' being a potential host for an Agent is only expanded fully in that scene.

Understandably, the movie shies away from revealing the transformation back into an ordinary corpse of persons other than cops who are taken over by Agents, and there is no scene in which the heroes preemptively gun down an entire room full of noncombatants before they can be taken over by Agents. Artistically this is understandable, but I wonder whether the apparent point holds up under scrutiny. Is there really a point in minimizing 'innocent' casualties when those innocents are fundamentally enemy assets? On the other hand, it is not clear that there isn't a point.

Interesting in relation to the discussion of globalists' war agenda...a great deal depends on whether the Chinese espionage penetrations of the F-35 and similar high-tech weapon systems is extends to hacking them, as is indicated by several incidents that are not generally discussed anymore.