Reincarnation BC - Resurrection AD? - some speculations 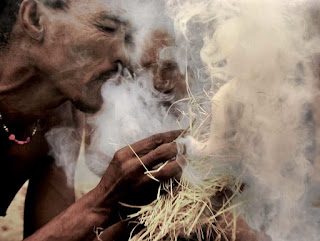 Although most Christian apparently don't have this attitude; I find personally it hard to reject-outright the idea of reincarnation.

This mainly because (it seems) that most people, through most of human history, have believed in the reality of one or another form of reincarnation - plus several of the more modern thinkers whom I most respect believe in reincarnation, apparently from directly intuited personal experience.

However, I find that the Gospels tell us that Jesus taught all Men are resurrected after death - not reincarnated - and make their choice of Heaven or Hell. On the other hand, the Gospel discussions of whether or not John the Baptist was some kind of reincarnation of a prophet seem to confirm that, at least until the advent of Jesus's ministry, reincarnation was regarded as possible - if not universal.

One way I make sense of this is that I think modern religions tend to fall into one of only two categories - either they believe in some version of reincarnation with spirits returning to inhabit a series of bodies; or else that each human spirit is formed at a time related to incarnation. But these two are not the only possibilities.

A further alternative is seldom known or considered - that an eternal pre-mortal human spirit was alive before incarnation, death and resurrection; in other words that the full potential span of human life falls into three stages: pre-mortal spirit, mortal incarnate, and resurrected incarnate.

(However, given the role for agency and choice, presumably it is possible to choose not to be incarnated, and to remain as a pre-mortal spirit. This would presumably be the situation of some angels - who are either awaiting incarnation, or else have - at least currently - declined the offer of incarnation. And it would be the situation of demons - who reject incarnation along with rejecting God's plan for creation and the Love necessary to its accomplishment.)

This three stage understanding of human life (which is the Mormon view) is the one I regard as true - and my interpretation of those modern people who believe in the reality of reincarnation is that they have not sufficiently seriously considered this alternative. That, for example, they have misinterpreted their intuited memories of pre-mortal spirit life (which may include historical actions in this world, and with people in the past) as being incarnated life. In other words, they remember previous spirit lives, but simply assume that these must necessarily have been incarnated lives.

On the other hand, since reincarnation was apparently a possibility for John the Baptist, it is also possible that some modern people happen also to be reincarnates who, like John the Baptist, are spirits that have returned to fulfil some particular function, do a particular job... So when such people seem to recall a previous incarnate life or lives, maybe they are correct.

I find it striking that so far as I know, all simple, tribal, hunter-gatherer type societies believe in reincarnation - in the form of a 'recycling' of spirits within the tribe over time. The concept is apparently that there are implicitly a fixed number of spirits (or souls) who are reborn some time after death - so that the same set of personalities recur across the generations. My presumption is that such societies self-understanding will have been broadly correct - so this would imply that there used-to-be a, probably universal, system of reincarnation.

Most sedentary (i.e. settled, non-nomadic) totemic and pagan societies apparently either believe in some version of reincarnation, or else they regard life after biological death as being something like Hades or Sheol; that is continued existence of the spirit or soul in a ghostly, demented half-life of present-awareness without agency. Again, I would tend to accept that these people correctly understood their situation - at least in essentials. So, it is possible that this 'underworld' represented the time in-between reincarnations; or that some people/s (e.g. the Ancient Hebrews or Greeks) chose Not to reincarnate - but remained in Sheol/ Hades... implicitly awaiting the Messiah/ Saviour.

If we accept that the situation up to the time of Jesus's incarnation (i.e. approximately the years BC) was as above - that biological death was followed either by a a kind of suspended animation like Sheol, or else a reincarnation from such a state. Then the further possibility is that this situation was changed by the work of Jesus; and from some point AD onwards - probably the time of Jesus's own resurrection - spirits were resurrected instead of being reborn.

This also applied to the spirits at that point in Sheol/ Hades - some of whom were resurrected at the same time as Jesus. But - given the importance of free choice - it may be that resurrection could be refused, and that some of these may have a job still to do as reincarnates.

If so, modern people who believe they recall earlier incarnations may either be recalling their pre-mortal spirit lives; or they may be people who recall an incarnation (or more than one) before Christ's work in making resurrection, and who have returned to incarnation for some particular purpose.

The universal mistake made by humans is in being exclusively preoccupied with humanity as the be-all and end-all of existence.

It isn't about humans, any more than it is about 'you' personally.

Humans have some extraordinarily quaint ideas about life and its nature.
Which is probably their most distinctive attribute. From this unfathomable error comes all other errors.

@Crow - It is about Beings - but creation was done by a Man (a fully-divine Man - i.e. God) for a purpose connected with raising up Men to full divinity (and angels are also Men, and demons) - so there's nothing much wrong with a precoccupation with 'humans', so long as we recognise that everything that is in creation, is alive and conscious and has purpose.

My experience of past lives seems to be of clearly embodied persons living an incarnate life. In my case a common soldier in Rome, a sinful medieval priest in the Pyrenees, and an American Indian living near Hudson's Bay in the 19th century. I don't reject premortal existence - if intuitively feels to me like it fits in somehow, but I have only a vague sense of it. Some of that sense could simply be the the awareness we live in between incarnations. I like the possibility of Angels and demons being beings with agency who have chosen not to incarnate. Likewise the Gnostic Aeons might fit into some similar state of existence. I also experience animals as having souls and think their relationship to humans is far more complex and intimate than most people today. Most farmers, unless they are complete clods, know their connection to animals is significant and mysterious and not at all what conventional science asserts.

I suspect most evidence for reincarnation comes from misinterpretation of dreams (visions derived from the dream state, regardless of whether during physiological sleep). I don't know that reincarnation is impossible, the Mormon doctrine about the fate of spirits of prenatal children who die before being born suggests that this may also be possible for those who are born before dying but otherwise fail to be considered to have experience mortality.

But I do know that humans can touch not only the general 'universal' unconsciousness in dreams, but even the specific dreams of people far separate from themselves in life experience (and possibly in time and space, though I have not verified such). Because the information thus gathered must be recontextualized through the unconscious assumptions and mental capacity of the recipient (not suggesting that the contact is one-way, but that this must happen each way), it's quite easy to see how it might result in such dreams seeming to be about lives in the distant past even if they are not (though, as I mention, I am not sure they cannot be).

Not all people do touch the dreams of others (at least not with any great frequency), there are factors of psychological defenses and openness that can limit such contacts. This may be best for most people, a dream that is open to other dreamers is probably open to worse things (I may be one of those).

As a certified past life regression hypnotist (under Dr. Brian Weiss), I have done a number of regressions...It is shocking how real and graphic they can be....One subject, a professional psychotherapist in this life, plunged into a life where she was abandoned, then murdered as a child..Another was a mother living in a wagon on the tundra, married to the same soul as in the present life..She starved to death..Her next experience was in a future life, on a spaceship or space station, in which she could only describe some of the equipment and its purpose, but had no knowledge of how it worked.... Oftentimes, the subject knows why they have chosen that life, usually for a particular type of experience that will be educational for the soul...For my part, I have had a great many lives, and learned a lot from them, but evidently not enough, since I keep incarnating.....