Did JP Donleavy "descend into Hell"?

As a young adult I read several novels by JP Donleavy - including his first book The Ginger Man, which was famously banned from Ireland and the USA for obscenity.

It is an energetic, picaresque story of an American student in Ireland - a charming psychopath, drunkard and rake; written in prose-poetic style reminiscent of James Joyce or Flann O'Brien.

As a novel it is innovative and influential - and being sexually explicit (albeit linguistically hard to unravel) was naturally a big success; probably because it did much to make selfish-short-termism sound attractive and enjoyable!

This was the much-reproduced publicity and jacket photo of Donleavy - presumably taken in the 1970s: 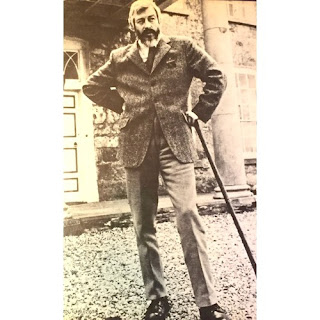 About a decade later; Eerdmans publishers reprinted Charles Williams's novels in paperback with rather attractive colour illustrations on the cover; including Descent into Hell - which, among other events, depicts the way in which an author (Lawrence Wentworth) is led to damnation in part by his sexual fantasies for a younger woman. 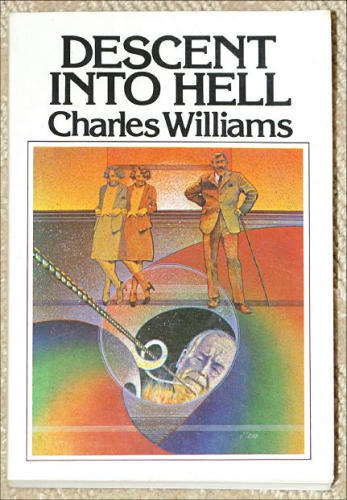 Was the illustrator (and/or publisher) making some kind of satirical visual equation of JP Donleavy with the wicked protagonist who eventually descended into hell?
Or, perhaps it was simply that - in that photograph, at least - the appearance of JPD seems to show the same kind of smug-yet-insecure arrogance that motivated Lawrence Wentworth? Maybe the JPD picture was chosen without any knowledge of who it depicted?
Or was the picture of JPD intended to represent another character altogether? Maybe even the Charles Williams alter ego playwright and poet Peter Stanhope?

I wonder whether Donleavy came across this cover; and if so what he thought about it. My guess is that he would have seen the appropriateness, and indeed welcomed it. After all, from what I gather of his life and from his books; I don't suppose that JPD would have harboured any serious or sustained desire to 'ascend into Heaven'.

Wow! I never read anything by JPD (probably having heard enough not to find any such to be of interest), but that photo looks familiar - yet I never made the connection with the Descent into Hell cover illustration. Interesting questions include, (1) how much does the larger 'descending Wentworth' look like the equally-bearded full-length lounging upper right hand man, (2) how much would it be appropriate to depict Stanhope and Wentworth looking similar, (3) what - memory very thoroughly fails to serve! - does Williams say about their appearances (has the illustrator - or someone who briefed the illustrator? - read carefully with respect to both or at least to Wentworth?)?

My first thought would be that the double young women juxtaposed would suggest the whole upper 'panel' is about Wentworth, but then, the story is very much about two sets of 'doubles'! It makes me want to look attentively at more of those reissue cover illustrations - and find out more about the illustrator.

His book, 'The Unexpurgated Code' is an absolute hoot! Essentially a Gentleman's guide in manners for any situation. It's laugh out loud stuff.