Christianity in England - deep past, and the present 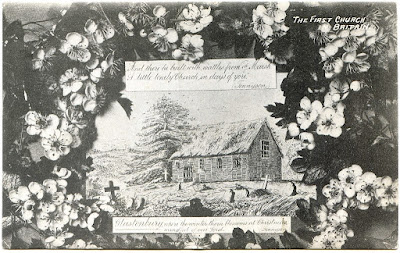 My understanding is that Christianity came to England very early, within not-many-years of Jesus's death - to Glastonbury in Somerset - and western parts of England have been continuously Christian since. Whether Christianity was brought by Joseph of Arimathea (as legend states) or by someone else, I don't know - but I think it arrived very early.

England has therefore been continuously Christian for a very long time - perhaps about as long as anywhere outside the Holy Land.

Christianity stayed in England after the withdrawal of the Roman Empire in 410; initially through the whole country, but later it was pushed westward by the Anglo-Saxons - who arrived from 449 and were pagans.

This 'Celtic' Christianity had the characteristics of the early church, which was much like Eastern Orthodoxy - that is, it was based around ascetic monks ruled by Abbots in rural settings (rather than Roman Christianity which dominated the rest of Christian Western Europe was based on priests ruled by Bishops, and mostly rooted in the urban cathedrals).

It took the Saxons a long time to get as far as Glastonbury in 658 - and by that time, the Saxons were already Christian. Therefore at Glastonbury there was an amicable transition-fusion of the residual Celtic Christianity of the Ancient Britons and the newly-converted Anglo-Saxons, which (in the South) was more Rome-influenced via St Augustine.

At the same time, Celtic Christianity had been converting the northern Anglo-Saxons, coming from Ireland, via Iona, reaching England from St Aidan at Lindisfarne - the Holy Island off the coast of Northumbria.

By the middle 600s the dividing line between Celtic and Roman Christianity was within Northumbria - with St Cuthbert of Lindisfarne in the northern part and St Bede of Monkwearmouth (who became Cuthbert's biographer) about 50 miles to the South. Relations were mostly amicable.

But gradually the Romans imposed their system (and their more astronomically accurate calculation of Easter - accomplished by Bede) on the whole nation starting from the Synod of Whitby in 1664. Cuthbert became bishop of Hexham further South in Northumbria, where the Abbey was at that time the largest stone building west of the Alps, and a centre of Roman Christianity.

My point is that the deep history of Christianity in England is very deep. While at the same time, the leftism that has proved to be Christianity's most successful foe (and Satan's most useful and strategic stalking horse) also substantially had its roots in England.

England has therefore been one of the leaders of Christian apostasy - and the faith is by now very weak both numerically and in terns of strength of conviction (2020 revealing the situation as even worse than almost anyone would have expected, when some of the most apparently devout Christians were revealed to be more profoundly leftist than Christian.

In sum - England has been a place of major contention in the escalating spiritual war of these End Times. Although it would superficially seem that the battle of Christians has long since been lost - the roots go very deep; and the continued special attention paid by the Satanic forces to England suggests that things are not yet done-and-dusted, not yet over-and-done-with.

'They' clearly perceive a potential threat from England to Their evil plans.

England still has a part to play in the End Times - if we Christians so choose, one way or the other. And, although events are desperate here-and-now for the followers of Jesus - they are not quite so bad as they were this time last year.

Which I find surprising and encouraging.

This reminds me of what CS Lewis wrote in That Hideous Strength, the battle between Logres and Britain.