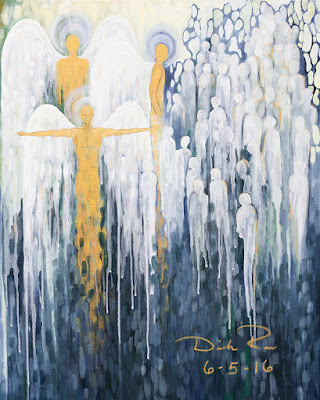 The faceless massed hosts of Heaven? No, not really....

The most powerful argument of 'modernism' is probably its positive attitude to, its advocacy of, individuality. It's interesting how often the argument comes down this - and serious Christians nearly always seem to end up arguing against individuality and in favour of some kind of communalism, some kind of subordination of the individual to the group - or to God.

Now, this is wrong - I think we feel it is wrong, at a deep intuitive level (I certainly do).

But how did this confusion arise - with so many people, for so long, arguing on the wrong sides?


I think the root of The Problem is, as usual, metaphysical - it relates to mistaken fundamental assumptions of most Christians concerning reality. The particular assumption relates to incarnation, the embodiment of humans - how and when this happens...

I think most Christians start from an unspoken and unexamined assumption that all Men were - to put it crudely - stamped-out as identical incarnate souls (probably) at some point between conception and birth; and all differences have arisen since then. The (wrong) assumption that all of us started-out The Same, and that individual differences we observe in this world are an unfortunate consequence of mortal corruption - and so the supposed-aim is that (in resurrected post-mortal life) we ought-to end-up as again The Same. This is envisaged as being absorbed-into a uniformity - as when Heaven is pictured (usually mentally) in terms of massed and apparently-uniform hosts, choirs, worshippers, praisers, armies, obedient classes of persons.

(Yet, surely, this conceptualisation clashes absolutely with the life and teaching of Jesus in the Gospels?)

In contrast, my contention is that the incarnation of Men is fundamentally like that of Jesus Christ. It is accepted by most Christians that Jesus was alive (co-eternally with The Father) before he was incarnated on earth; and (as is standard doctrine for Mormons) I believe that the same applies to all Men.

If such a pre-mortal spirit existence is accepted for all Men, and not for Jesus only; then this harmonises easily with the understanding that we, each of us, always-were distinct individualities. We were each unique individuals from eternity, from before we were conceived or born - we were born as unique individuals - and that is our ultimate and divine destiny.

Our Christian God, the creator, does not want same-ness, does not want people to be identical with one another: the plan always was and remains that we are unique individuals who should live together in-love.

And this is why love must be central to Christianity - it is by love (as we may glimpse in the best mortal marriage, family or friendship) that different individuals may live, work, create together in harmony and with a mutually-reinforcing (synergistic) effect.

The original Problem for God was therefore (in a very simplified sense) how to create this reality in such a way that already unique individuals would - voluntarily, by choice, in knowledge, over Time - reach a situation in which all would create-together in a wholly-harmonious and mutually-reinforcing way.

God has no interest in making everybody the same, or subordinating the individual - except sometimes as a matter of temporary expediency during the long period of learning. But the primary nature and goal of God's reality is of individuals working towards a loving harmony of creation.

Therefore, I regard the modernist materialist advocacy of individuality as a perversion and distortion of what God really does want. And I regard the standard mainstream Christian opposition to this individuality as an error; induced by the temporary expediencies of what might be termed 'social policy' or 'church order' - which are important but not fundamental Christian Goods.

While there is a metaphysical basis for the misconception that the goal is elimination of individual differences, the scriptural basis is the injunction "Enter ye in at the strait gate: for wide is the gate, and broad is the way, that leadeth to destruction, and many there be which go in thereat: Because strait is the gate, and narrow is the way, which leadeth unto life, and few there be that find it."

The fact that the path to life is narrow compared to the path to destruction does not really have anything to do with individuality, but with what most individuals (at least those attracted to God's offer of eternity in the first place) have in common, a preference for life over destruction. As individuals, we can have different ideas about what is best in life, what it is that makes life better than death. But as long as we want life rather than death, we must act so as to live, rather than take the much more numerous options leading to destruction.

Within the frame of having chosen life over death, there is still great latitude for individuality. And while the latitude of options initially available to those who chose death over life is much more diverse, that doesn't matter in the end if you wanted to live rather than die. Nor does that latitude of options continue to expand, not in any important sense. As you approach destruction, your options narrow down to a single end no matter how convoluted the path you set at the beginning. It is the dead who must ultimately yield up all their individuality in exchange for their initial diversity of actions, only those that chose life first can then increase their development as individuals.

There is also the unfortunate misinterpretation of the statement that common group differences will be of no importance in the Kingdom of God, the significance is that the only differences will be what is truly individual and chosen by the self, but it is read by some as meaning that there will be no differences at all.

P.S. some kind of message always pops up too briefly to read when posting a comment, is that anything important?

@CCL "P.S. some kind of message always pops up too briefly to read when posting a comment, is that anything important?"

- I don't know what you mean - does anyone else?

If the pop-up message is in a pale yellow box, then it might be the warning that 'anonymous messages are seldom published and comments are strictly moderated'. That's what it looks like anyway.

I think there is a big difference between proper Christian love and modern 'spiritual' love. The former is based on the full reality of the individual and is deep and true and real. The latter is based on a 'we're all one' scenario and is bland and insipid. It's not really love at all but a misconceived affectation of it.

I think Luther might have it, but the thing always disappears too fast to tell what it actually says. The warning about comment moderation at least seems the right length.

P.S. I think the message that pops up when previewing a comment is different. "Comment with your Google Account if you'd like to be able to manage your comments in the future, If you comment anonymously...." Meaning it's too hard to read the second line cause it shifts about.

If we pre-exist eternally before incarnating as physical beings, then in what sense God is the creator? Creator of physical reality, perhaps but certainly not "our creator" since we exist eternally and require no creation.

@Gyan - There is some thing in us which is un-created - and this is the basis of genuine free will or 'agency'; and there is also something about us which has been created by God, by which we have become the children of God.

The basic aim of creation is not to make 'stuff' but to make a world of cohesion and continued creation - and this cohesion from love.

An understanding of Love between Beings takes the place of forces like gravity, electromagnetism, particles, waves etc in physics.

Perhaps rather than "un-created" we should say "self-created"?

I am less than certain as to whether there is an improvement in factuality in the second term, but I feel there may be more philosophical truth to it.

@CCL - By un-created I meant something like 'has always been in existence' - I didn't mean self-created.

I do tend to take that view myself, I feel that the essential core of the individual will must be essentially immutable.

On the other hand, I sometimes say, "people may not ever change, but they can learn." That is to say, while I do not regard as proven that the essential desires which compose the will alter with time, but the relative priority of taking action to fulfill those desires can be modified by experience demonstrating different pragmatic expectations for satisfaction of them.

In which case, "self-creating" might be even a bit more useful by discarding the past tense in favor of the present.

Of course, "self-created" would be a contradiction in terms if we assume that there was a time before something existed, since it could hardly have caused its own existence without already existing. But the past tense does seem to have that implication, which the present tense avoids.

I recall that previously I had difficulty understanding your thoughts on what Barfield termed "polarity", but this seems helpful.

Though rather than "not cynical enough", I should have said "not skeptical enough". But there is also the importance of the nature of man, which is to test received wisdom rather than accept it uncritically, being natural to us. Cynicism errs not in demanding we act according to nature, but in denying that human nature is qualitatively different in many important respects from the natures of other animals.