Nationalism is better than Globalism - but has the same basic problems, just on a smaller scale... 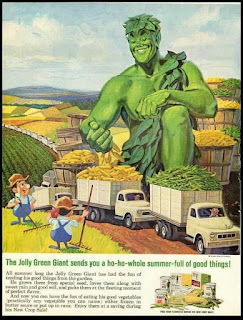 He may be gigantic (and green) - but he's not really jolly...

Because nations are too big - way too big; just as cities, corporations, charities, towns, villages, universities, colleges, research groups, schools - and their classes are too big...

Indeed, pretty much everything nowadays is too big - except for families.

But for this reason - nationalism is Not a Good Thing. It's preferable to super-nationalist entities such as the EU, UN, NATO, Multi-nationals, and those semi-secret conspiracies of the elites.

But although (for example) Brexit is better than Remain - it still isn't aiming at anything Good - quite the opposite! Let's not get carried-away by the battles of today: the lesser of two evils is preferable; but it's still evil.

This is true, but the alternatives aren't obvious. There has to some compromise between a genuine cosmopolitan spirit and the patriotism that is natural to every people, that doesn't fall into the traps presented by the secularist counterfeits.

@Carter - I agree that there aren't any obvious secular alternatives - but nationalism nowadays is far too feeble to do any heavy lifting in politics - indeed, the era of serious, motivating nationalism seems to come just after religious apostasy (as an alternative) but usually lasts only a generation.

Patriotism is another matter - being quite natural and spontaneous and liable to reawaken as soon as the massive mainstream disapproval is lifted. Also patriotism has different levels, and is maybe strongest at smaller subnational levels.

The place in which I live (Newcastle upon Tyne) has probably the strongest local patriotism of any English city - but it comes out in things like football, dialect, and other 'cultural' things.

But patriotism isn't really a primary political motivator - it would need to be channeled, I think.

An important difference between nationalism and patriotism is politics: nations have a government, but patriotism can exist without one. Golbalism implies international rulers, nationalism implies national rulers - and in most nations these rulers are almost exactly a sub-set of the same people as the global rulers. In theory there is a greater possibility to get rid of bad national rulers than global ones - in practice, neither or possible... there is not sufficient motivation of the right kind.

Nationalism is a natural ally of anti-globalism, but they are hardly identical. This is especially obvious on the American scene, where probably have the really committed anti-globalists are also sufficiently deeply anti-nationalistic to make patriotism in the ordinary sense impossible for them.

Of course, anti-nationalism to the point where patriotism becomes psychologically impossible is also evil, but it most certainly isn't nationalism. Nor is it necessarily globalism, though anti-nationalists tend to serve globalism whether or not they do so willingly.

In firearms safety training we have a concept of not aiming at the exact worst outcome. It really doesn't matter where the weapon is pointed when you're not planning to shoot anything, except that it should not be pointed in exactly the wrong direction should a mishap or malfunction occur.

National politics exist, we can decry that, but they aren't going to stop existing unless eliminated by something worse; the globalists take over completely, a general civilization collapse, a gamma ray burst wiping out most life on Earth, whatever. I think that we can and should on most national political questions take the position that it should not be a matter for national politics, with the aim of slowly defanging national politics by giving all its jurisdiction back to the local or individual level of decision.

But something like Brexit is a national level political question, and like it or not, properly so. One cannot realistically say that it is not a thing that should be decided at the national level except by appealing to it being settled at the globalist level. Alternatively, one could say that it is purely a globalism issue, that all that is being decided is whether the globalists should have more or less power (which is what the initial vote largely was, the devil of increased national level control as the 'only alternative' to globalist control is in the details of implementation).

Of course, the globalists are always happy to promise that they will allow more individual and local freedom than any particular national government currently permits. I think they actively enjoy plotting to abrogate those promises, the twisted smiles they always show when making such promises seem more to be anticipated sadism rather than their own pain.

For as long as people work for change via the voting and bureaucracy-based systems that have been set-up to control them; nothing positive will happen. Anything happening within mainstream politics will (as it always has been over the past half-century) - overall be turned against Good. e.g. Having Brexit 'negotiated' by any or all the current leadership class means that Brexit will not have a good outcome, whatever the outcome.

I see what you mean, certainly the faith in the national level politics that led to engagement with the voting process rather than disengagement and quiet but unmistakable protest by, for example, conscientiously refusing to pay taxes, represents a yielding to temptation.

That said, I think it is an understandable temptation. I know what that kind of serious protest costs (even at a minimum), and I don't quickly condemn the reluctance towards engaging in in so harshly as to call it 'evil'. There is a point at which I think that one is resorting to evil by engaging with the government financially, but for the most part I think it is sufficient to say that the choice of personal safety over conscientious protest is a lesser good which allows great evil.

Unfortunately, it doesn't seem to allow any countering great good, at least not any that would be seriously impaired by a preference for conscientious protest over personal safety (that is the meaning of "allow"). I haven't throughly excluded the possibility that it might, though.

I do acknowledge that personal safety is itself a good, one that is "higher" than satiation of many other biological impulses. It cannot be the highest good, but I do think it needs to be ranked above the aesthetic satisfactions, or at least most of them (which I frankly have trouble doing).

So I can't answer precisely what form of protest is optimally significant without crossing the line to being excessively unsafe. Probably something I would consider 'unsexy'.