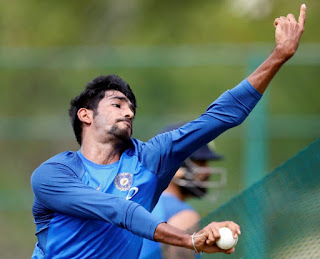 I have begun enjoying Test cricket again - and the main reason is that we are again in an era when the ball has become dominant over the bat.

I began to go-off Test match, and other forms of, cricket from 2014-15, when the international authorities banned the 'doosra' - a slow bowler, finger-spinner's delivery by which the ball was deceptively spun in the opposite from usual direction. From then we experienced a rather dull era of high scoring batters and apparently unremarkable bowlers.

After the superb 2015 New Zealand tour of England, I found that I didn't much enjoy any Test matches until the last English season of 2018 - mainly getting my cricketing pleasure from the (rather more disposable) format of 50-over 'one day internationals, at which England began to excel and dominate by scoring shedloads of runs - despite rather mediocre bowling (except for the excellent Rashid and Woakes).

But it has always been bowling that gets me most excited, and especially unusual - unique - bowlers. These are usually spinners (slow bowlers) but a really exciting and different fast bowler has emerged from India; who is currently pulling up trees in the Indian Test series in Australia.

Jasprit Bumrah has just about the silliest 'run up' approach to the wicket of any bowler I have seen: a short walk, a stutter, a few steps of a gentle jog and then in his wind-up he presents a stiff right arm, sticking out at 45 degree and with an abnormally deformed elbow - extreme abduction (outward angled) and hyper extended (bent back the wrong way).

But, from this weird and unpromising beginning, he unleashes a whiplash-armed delivery at very high pace (around 90 mph or above).

Bumrah has immaculate control of line and length; and as well as a 'stock' delivery of good length, he bowls a hard-to-avoid short bouncer, an even deadlier 'yorker' (homing-in on the base of the stumps); and the ball could be swinging towards or away from the batter! He also has a disguised slow ball, that floats out of his hand despite the fast arm.

And, whereas most fast bowlers are aggressive, angry-staring, swearing, bad-tempered characters (the greatest recent quick bowler - Dale Steyn - being a classic example) - Bumrah seems always to be cheerful and smiling. When he dismisses a batsman he is happy, rather than triumphant.

Originally Bumrah dominated one-day (including T20) cricket, and has been the best fast bowler in that format for the past few years. But it has surprised many people to see him so rapidly showing himself a master of the long game. One-day bowlers may thrive despite relatively-poor fitness and stamina - in T20 there are a max 24 deliveries, in ODIs a max of 60; wheras Test matches last about seven hours per day, for five days; and fast bowlers may bowl hundreds of deliveries, spread-out over three or more of those days. Bumrah's weird action looked as if it might not be sustainable without self-injury.

Well, it is still early days, and Bumrah is only in his third test series; but these have all been 'away' (most bowlers perform better at home) and already he is probably the most feared bowler of our era; the one most batters would least like to have bowling at them. He shows no sign of fatigue, and is able to bowl just as well or better (and just as fast) at the end of a long match, as at the beginning.

Of course, Bumrah isn't the only reason I am enjoying test cricket again; but it is always something special to have witnessed the emergence of an unique talent; someone who does the job in a way nobody before has ever done it; and as a result of some physical abnormality which the player has turned into an advantage.

(Often this has been the case for spinners. The greatest ever bowler, Murali, had a permanantly flexed elbow and freakishly bendy wrists) - but less often with fast bowlers. Chandrasekar bowled fizzing top-spinners and googlies from a polio-withered right arm that was so weak he couldn't throw with it!)

After so long, cricket still has the capacity to surprise!...

I only partly understand cricket commentary, but it brings warm memories of how a lagging interest in baseball can be at times revived by the emergence of a new star (even a "flash-in-the-pan"), and especially when he has a quirky style and engaging personality. I think right away of two "bowlers" decades ago, Mark Fidyrich and Fernando Valenzuela.