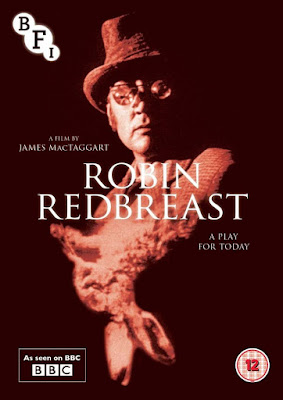 I don't suppose any readers will have seen, or even heard about, Robin Redbreast - a BBC television play from 1971; which has been re-released on DVD by the British Film Institute, and which I watched on Amazon Prime.

My interest in this obscure corner of the media was that Robin Redbreast seems to have been the first example of a genre that had a fairly big impact on me as a teenager - which is the idea that in remote rural communities, paganism has either been sustained or sometimes revived by a local leader.

This re-imagined ('neo') paganism is portrayed in a way that is both attractive - because of its naturalness and the intensity it evokes (also, its transgressive sexuality is regarded positively); yet also sinister or even horrific, because of its ruthlessness, manipulativeness, and use of scapegoating and human sacrifice - there is considerable ambiguity.

In RR the spiritual leader is called Mr Fisher (presumably a reference to the Fisher King) - a superb, understated acting performance by Bernard Hepton which lifts the whole drama - but we are not told whether he has revived the old traditions or whether they never died out, and he merely sustains them.

Throughout the play, the female protagonist gradually discovers that there is a surface facade of modern normality, but beneath that the villagers have archetypal roles; and are replaying what they regard to be an ancient and necessary ritual. I'll say no more about what happens in case readers wish to see for themselves.

The most famous example of the genre established by Robin Redbreast, although I didn't know about it at the time (because it was adult rated), was The Wicker Man movie of 1973.

But for me, examples would be The Owl Service and Red Shift by Alan Garner; and The Children of the Stones on TV. There were non-fiction books too: Robert Graves's White Goddess and the oral histories of George Ewart Evans (e.g. The Pattern under the Plough), and Colin Wilson's 'occult' series.

Perhaps most important to me was a Reader's Digest encyclopaedia called Folklore, Myths and Legends of Britain - published in 1973. The idea was that many examples of traditional folklore, myths, legends, children's songs, dances, the 'ritual year' etc - were pagan survivals; and therefore a living link to our ancient past.

For example, the author Terry Pratchett grew up in this environment and this is one basis of his discworld - in its rural aspects, anyway. Pratchett describes Morris Dancers as having a vital role in sustaining the cycle of seasons, and describes uncanny things going-on during The Morris. This was mainstream in the 1970s, and referenced on record sleeves and notes to the Morris Dance music (from which I learned by ear many tunes that I still play on my squeezebox).

Forty-something years on, and the pendulum has swung to the opposite end; and the folklorists now assume that nothing is ancient; and everything is a recent and self-conscious revival. If there is not a written historical account of something, then it is assumed to have been absent.

This view arose because it was discovered that 'traditions' that had been invented at known times by specific known individuals, can very quickly have their origins forgotten and become regarded as having 'always' existed.

However, this specific situation has rapidly become a general assumption - and Folklore is nowadays mostly a cynical exercise is debunking and disenchantment. For instance, Morris Dancing is now supposedly 'nothing but' an ignorant and crude peasant's copy or parody of the sophisticated, urban, courtly dancing of the Tudor period, or thereabouts.

This is why the seventies remains interesting; especially in Britain - as the time of the last vestige of mainstream media (and population) 'spirituality' - albeit of a debased kind. And why Robin Redbreast remains worth watching.