Tolkien's exceptional, heroic, dominant women - Galadriel and Eowyn - and why They convince (while most modern examples emphatically do Not) 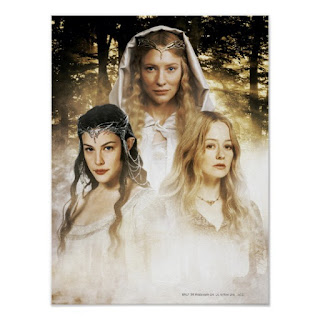 L-R: (Arwen) Galadriel and Eowyn, as depicted in the LotR movies:
Miranda Otto as Eowyn was, indeed, an astonishingly apt, deep, wholly-convincing performance

There are two 'dominant' women characters in Lord of the Rings, Galadriel and Eowyn. Three generations of readers testify to the fact that they 'work' narratively - and in this respect they stand-apart from the many thousands of dominant women characters that have become such a tiresome cliche in recent decades (in fiction, on TV, at the movies - and in 'news' stories) who strike the reader as contrived, incoherent, preachy - mostly just plain Unconvincing. Aside from Tolkien's far greater skill, the main reason why Galadriel and Eowyn work and so many others fail is that G & E are both presented as exceptional.

Read the whole thing at my Notion Club Papers blog.