Review of the movie Christopher Robin (2018) 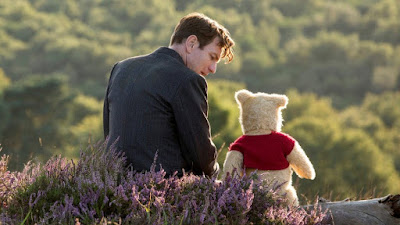 The movie Christopher Robin (2018) starts, and indeed continues for more than half its length, superbly; truly masterly storytelling and inspired, gorgeous visuals - a textbook example of consummate craft in film-making.

It then rather degenerates into a kind of 'caper' movie, with chases, last-minute escapes, slapstick, ham-acting elicited from the background characters* - and an inept, unsatisfying ending.

It looks like a wonderful script was meddled-with and spoilt in the process of movie-making; it looks as if there was a failure of nerve; it looks very much that an original and unusual but coherent project was (to a significant extent) messed-up en route by dumb, vulgar outsiders insisting upon the insertion of film-school, boilerplate cliches.

Not many movies are as good as this one is to start-with - so this very typical pattern of Hollywood failure is even more than usually disappointing.

But it is certainly well worth watching the very beginning, which sets-up the situation of the adult Christopher Robin.

This is a deft and exact montage of scenes of Christopher Robin growing-up - schools, college, courtship and marriage, army, battles, a child, and peacetime respectable success. This is done - perfectly - by transitioning back and forth between animated versions of the EH Shepherd drawings from Winnie the Pooh, and lovingly luminous recreations of 'real life'.

The movie continues very well for most of its (rather bloated - again a common flaw) length; perhaps because its theme is one close to my heart - the disenchantment of modernity and its intolerability. And I think I can imagine, clearly enough to suffice, the way the film should have ended: its Platonically ideal ending...

I can honestly say I have never seen a more beautiful celluloid rendition of that England of happy memory. The tough question I take from Christopher Robin is - what does this imply?


*Note: When we see 'bad acting' from minor or background characters in movies, this is nearly-always because of the way they have been directed to act - almost-never due to lack of acting ability. These people can act, and very well - it is only, some, stars who can't act. Exceptions are likely due to the evils of the 'casting couch' system.
Posted by Bruce Charlton at Wednesday, January 09, 2019