Real tough men versus what currently passes for it 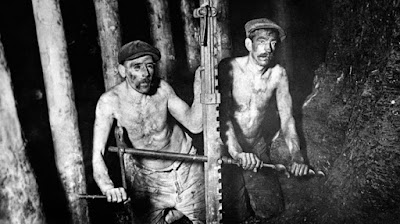 As a child I had opportunity to see the tail-end of a culture of real tough men - I mean the face working coal miners of Northumberland, such as my grandfather.

They toiled eight hours per day deep underground in 18" seams with a pickaxe and shovel, removing coal and rock (eight hours at the actual coal face - they were not paid for the 'travelling time' getting there and back).

These were smallish, wiry, bow-legged men of immense strength, stamina and toughness.

Very few could do this face-work - most who tried it failed and were reallocated to lighter but lesser-paid types of work.

And these miners were not just exempted-from, but forbidden to enlist for the military during the two world wars; because their work was essential. Indeed, some conscripts ('Bevan Boys') were sent to the mines instead of the army - but very few were able to do the work.

The contrast with the modern idea of a tough guy - the product of weight training, hormones and the tattoo artist - could not be greater.

In contrast with those miners, the modern tough guy looks like a Hollywood hero, a comic strip, or a member of The Village People. The one was calibrated against tons of coal shifted against time, the lash of hunger and the constant threat of disablement or death; the other by posing in front of a mirror.

The one was reality, the other a simulacrum based on fantasy.

Finding this blog was a Godsend. Thank you for the quality of the insights you offer, and thank you especially for this post.

I see this prefabricated tough guy persona frequently these days, and the individuals always make me shake my head in sadness. They seem to be too busy playing a part to actually be real people. One wonders about their wives and children (if they have them) and their parents. How perplexing it must be for a father to look at his son, with whom he once fished and built model battleships, and to see a grotesque creature staring back at him, inked and swollen and glowering.

Also, most of these specimens I know personally seem to be on SSRI's and other prescription medications. The definition of "tough" seems indeed to have changed.

"In contrast with those miners, the modern tough guy looks like a Hollywood hero, a comic strip, or a member of The Village People."

Though I appreciate the predominately serious tone you employ in your writing, I must confess that I do relish these wry bits of humor whenever they appear. The last part of the sentence above nearly killed me this morning - I was laughing so much that I almost choked on my coffee!

@Francis. Glad you liked it - I had just been looking at exactly such a self-depiction. Do these cosplay hard-nuts realise, I wonder, how they actually look like the opposite of what they apparently think they look like?

I recently stopped weightlifting. When I started I told myself I was doing it to take care of myself but in reality there was always a lot of ego involved. I now just do a bit of basic training type stuff like a set of pushups and pullups once a week just so I can keep my body healthy as I age and keep working for my family (I will be an older father since I just had a child at 44 years old).
I also hate the modern obsession with finding the perfect diet (grams of protein, carbs, whatever), the obsession with anti-aging diets, etc.

Or at the coal face.