"The Beagles are coming!" 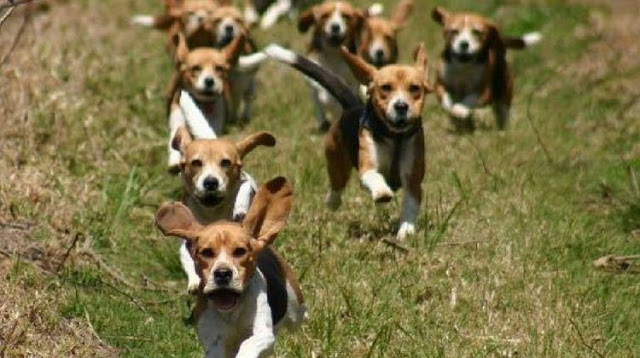 It is a little known (and much disputed) "fact" that Tolkien's first idea for the famous 'eucatastrophe' of the Hobbit - that unexpected turn in the Battle of the Five Armies, when all seems lost until the sharp-eyed hobbit sees their salvation coming - was that the phrase shouted by Bilbo would be: "The Beagles! The Beagles! The Beagles are coming!"

For some reason, nothing is said in The Annotated Hobbit, or The History of the Hobbit, about whatever strange sequence of events eventually led to Eagles being substituted for Beagles; but there can be few readers who are not disappointed by the change.

The mental vision of a vast and magnificent pack of hunting Beagles, sweeping down the valley leading to the Lonely Mountain, there to destroy and devour the goblin army, is one that cannot really be compensated for by mere birds.

Perhaps Tolkien simply left-off the letter B by accident - or failed to read his own spidery handwriting; and then the error was copied in further drafts, and unnoticed by the proof readers and typesetters? Probably we shall never know.

But - strangely - this same error propagated itself (or was propagated, deliberately) throughout Tolkien's other work; and the major role which Beagles were supposed to have in the entire Legendarium was - bizarrely! - eventually usurped by Big Birds of Prey.

(I personally suspect that a hostile conspiracy was at work; perhaps related to the Anti-Blood-Sports lobby, which was even then active in England...)

Therefore, in the unfinished Lost Road and Notion Club Papers novels - the phrase The Beagle of the Lord of the West! was intended to recur throughout. This was to be uttered when a character looked up at the evening sky and saw great wide spans of cloud that looked... exactly like two enormous ears of a Beagle, spread across the heavens; a warning from the Great Beagle of Eru to repent before it was too late.

But sadly that, too, was (apparently) altered to Eagle in the published versions - as was Pippin's hearing of the phrase being shouted in the battle outside the Black Gate of Mordor, when he thinks he might be hallucinating what had happened in Bilbo's story. But it is in fact Gandalf who, looking north, sees a great pack of dogs sweeping down upon the hosts of Sauron; and again calls in a mighty voice: The Beagles are coming!*

And after the One Ring has been destroyed, it was upon the backs of the three greatest of these Beagles that Gandalf was intended to rescue Frodo and Sam from the impending lava of Mount Doom.

Surely a nobler and more satisfying eucatastrophic climax than the implausible notion of birds carrying men and hobbits in their claws!

One can only shake one's head sadly, at what might have been...

*Note: It is most regrettable that, having made this error, Tolkien seemingly chose to 'double-down' on it, by using the flight of Eagles liberally as a narrative device; thus creating the notorious 'plot-hole' of Lord of the Rings - whereby (obviously!) an Eagle should have been used to fly into Mordor and drop the One Ring into the Crack of Doom.

Haha....this is fun. I wonder how many people even know what" Beagling" is nowadays.

Presumably the noble eagles would be as prone to corruption as men whereas the humble hobbits were beneath consideration as adversaries by Sauron?

@David - I presume you mean 'the noble *beagles*' - see, you made the same mistake as Tolkien!

Having only a rough familiarity with Lord of The Rings and Tolkien, I actually believed this might not be satire and looked it up.

A moment later I, a Yank, remembered Bruce is British. Then all became clear.

Dashing around in the wake of the Christ Church and Farley Hill Beagles, back in the day, watching the Beagles tearing about in a broad curve oblivious to the rabbit obvious to me in the heart of that curve, Yeats's famous lines sprang to mind...

Turning and turning in the widening gyre
The beagle cannot hear the beagler;
Things fall apart; the centre cannot hold;
Mere anarchy is loosed upon the world,...

I fear Peter Jackson would have made (or will, in the remake?) the Beagles too fierce, losing the essential lovable element... though I wonder if a slightly Disney Jumbo touch might not be appropriate - some magnificent glides on those enormous ears, spread across the heavens?