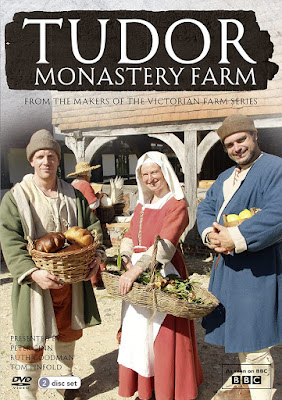 From 2005-2013 the BBC showed a series of year-long demonstrations of 'experimental archaeology' by re-creating a year in the life of a farm at various points in history from 1500 (Tudor Farm) to 1939-45 (Wartime Farm - which I have not yet seen).

These constitute one of the very best documentary series I have seen; both extremely informative and very enjoyable; and with a likeable and well-informed 'cast' including Ruth Goodman (historian, practical expert at household tasks) and Peter Ginn (archaeologist).

I have been interested in historical agriculture since my middle teens - when I was hoping that the modern world would soon be returning to something like either the Medieval or the 18th century system of farming, as the basis of a restored rural civilization (along the lines of The Shire). Yet every episode taught me plenty that was new.

The Tudor Monastery Farm also has the additional joy of integrating the account of farming and household practicalities with the Christian year around 1500 - in the reign of Henry VII, the first Tudor monarch; and the last King of 'Merry England' with its integrated and pervasive Catholic national life.

The presenters pretend to be tenant farmers of a monastery - and continually emphasize the way that the farming year was interwoven with the church calendar; with its many fasts and feast days, and community celebrations. Inter alia they stage a village fair, a market day, harvest festival, processions, singing and dances, and a Mystery Play.

At one point they parade into a delightful church that has been decorated in the colourful style of 1500: 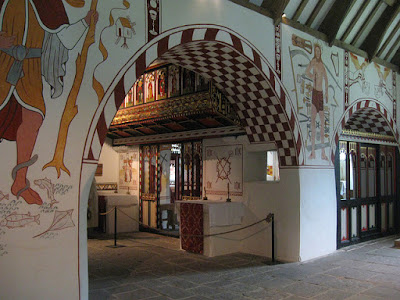 Altogether, this is the most convincing picture I have seen of life at the cusp between the Medieval and the Early Modern - with a realistic sense of the Chestertonian national ideal of a Merry England. This is rare, because even the most detailed modern accounts of the Middle Ages, fail to depict this life as it was experienced at the time: through a Christian lens.
Catholic readers will find this nostalgic and sad; and Protestants will be forced to admit that much which was good was lost forever at the Reformation in England; with Henry VIII's 'dissolution' (i.e. wholesale looting, destruction - and murder) of the civilization based-around religious houses: monasteries, abbeys, nunneries, friaries and the like.

I've been watching these with my 10 year-old daughter. She is captivated, to put it mildly.

It also gives me a chance to root out the insidious cultural evil worming into our children. My daughter was absolutely fascinated to learn about her ancestors (before they came to Canada in the late 18th century). One day though as we were watching Ruth Goodman et al, my daughter told me she no longer wanted to have such ancestors. Sure enough, somehow (despite our efforts to shield our kids) she was exposed to the toxic "white privilege" lies. For the record, she counts among her most beloved friends several non-white kids. I did my best to disabuse her of the woke rubbish.

The contrast between the gentle, funny and engaging Ruth Goodman on the one hand, and the demonic angry woke racists on the other could not be more stark.

In any case, these are wonderful documentaries which are now made available for free on YouTube.

We strongly enjoyed the Victorian Christmas program put on by some of these same people. It included the hay harvest, a couple of styles of brick making, restoring an old forge, and some incredible food preparation.

@Nova and Ben - Glad to have your endorsements. Yes, a real gem of documentary making.

Yes can't agree more these are very enjoyable programmes akin to watching Jack Hargreaves in the 1970's with his "Out of Town" series.

@Mike - Excellent comparison with Jack Hargreaves - I am a big fan of his work too.

I've enjoyed his autobiography (Out of Town) - but the biography, 'Jack Hargreaves - a portrait' by Paul Peacock was the most surprising biography I have ever read! (and I have read a lot). He was a very different, and much more complicated and... err ambiguous, person than the countryman 'Jack' character he played so well, and which we both enjoyed so much.

Thank you for the suggestion, a very interesting view of Tudor England...

It is only after returning to life in the West after living for fifteen years in Ethiopia that I understood what we had lost here, in Europe.

In particular, life in Ethiopia is still completely enmeshed in the liturgical year... so that one always knows which feast is coming up, if it is a fasting day/period or not...etc. etc. Religious events involve the whole population, the entire country. 'Everyone' fasts for Lent, for example.

Indeed, in Ethiopia, just as they showed in the documentary for Tudor England, most people still know which saint's day it is, and refer to it as such.

So that religious reality is, in Ethiopia, part and parcel of everyday 'life', and cannot be separated from it (indeed, in fifteen years in the country, I must have met perhaps four or five people who would be so bold as to call themselves atheists).

Curiously, Ethiopia (outside of the capital) matches very well with many of the material levels of development shown for Tudor England (wattle and daub, oxen powered agriculture...etc.).

Recent developments (and development itself) are now fast eroding this remarkable cohesion.

@YMS - Thanks for that. Interesting to know. And I am pleased that Ethiopia retains its extremely ancient and distinctive Oriental Orthodox ('monophysite') Christianity. Another of its main outposts, Coptic Egypt, has apparently been severely damaged and destroyed (by Western intervention aka Arab Spring) in the past couple of decades.

The ideal is somewhat approximated in some places - but I think none have retained the premodern system of a divinely-ordained monarch. Republics and 'democracies' cannot attain the same level of total integration as monarchies did (at their best, when under a genuine monarch).

Also, the functional specialization of modern life means that each institution tends to develop its own specialist language and discourse, which is not rooted in the religious.

Perhaps the first example of this in the West was the universities, when people like Abelard began to impose philosophy on the religion - rather than the opposite. This was the beginning of the transition from the ancient to the Medieval world.

(As Fr Sepahim Rose said - the orthodox world never had a 'middle ages' - but went from anicent to modern.)

Nowadays - even in Ethiopia - there will be specialist discourses in law (especially international law), economics, medicine, science, the military etc. So modern people will experience a secular-religious division at the level of thinking - as they move back and forth between these 'worlds' - when compared with the ancient past.

Glad it was of interest.

Here is short blog post about an Ethiopian market, and the changes underway:

And a podcast episode about an Ethiopian religious figure:

Father Seraphim's comment (the absence of the Middle Ages in the history of Orthodoxy), is a fascinating insight.