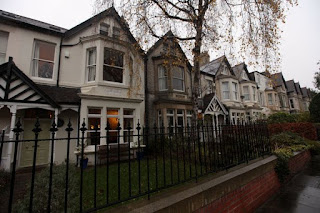 Above is the house in Jesmond, Newcastle upon Tyne, that was inhabited by the Bolshevik Russian writer Yevgeny Zamyatin while he was working in the Tyne shipyards, building icebreakers during the First World War 1916-17 - returning then to join the Revolution.

This plaque is situated to the right for the front door: 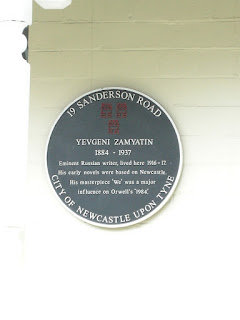 As the plaque states, Zamyatin went on to write We - which is credited to be the first futuristic 'dystopian' novel - and is generally regarded as the model for George Orwell's 1984.

But We was actually a development of the earlier story The Islanders, a satire about the life and people of Jesmond:

Which means that I live in the exact place upon-which was modelled the world of Orwell's 1984.

**
Note: the other Orwell connection is described here:
https://charltonteaching.blogspot.co.uk/2014/08/george-orwell-intended-and-expected-to.html
which demonstrates that Orwell intended to be buried in Jesmond (alongside his wife) - buried, that is, in the prototype of 1984! That would have made an amusing irony.