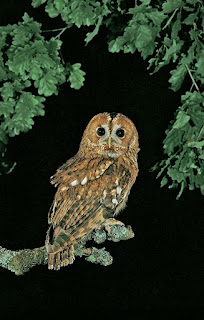 http://www.birdwatch.co.uk/channel/newsitem.asp?cate=__15228
I live in a suburb less than a mile from the centre of the city; but we have a good-sized garden with a fair bit of wildlife - fox families, bats, squirrels and Tawny Owls evident by the calling to each other Twit Twoo (female - male).

But until yesterday I had never had a good view of an owl; I had only seen a silhouette as they roosted in a tree, on top of a roof, or flew across the night sky on blunt tipped wings.

In the early evening, at about 16:30 (it being dark by then at this latitude and at Winter Solstice, almost) I heard from the front of the house a loud and nearby owl-like commotion of twitting and screeching. So I went into the back garden and extinguished the house lights, and took a Maglite torch that could be focused into a narrow, bright beam.

Once my eyes had adapted, I could see the owl silhouette on the lime tree, making all sorts of keening, and burbling sounds as well as twitting (clearly a female) - and then shot the torch beam at it to reveal two very large orange eyes caught in the light, and a beautifully varied plumage.

To my surprise, the owl seemed only mildly irritated, and consented to be looked at for a while; before flapping lazily to the oak tree, a dozen yards further away - when she suffered another couple of minutes of torch-assisted examination - albeit from about forty yards; after which she again flew (tracked by the searchlight beam) and perched a couple of gardens away.

Then another (apparently female) began shrieking from about a hundred yards in the opposite direction from which she had come; and the two of them got very excited indeed - with visible agitation and a lot of rapid calling. And 'my' owl flew off; either to greet or to intimidate this new arrival.

It was very pleasing to put a face to this inhabitant of my garden, whose activities I have so often heard but never previously observed.

As a young child I was - in equal measures - terrified and fascinated by owls; often awakening at night in terror at their 'Hoo hoo' calling from the wooded fields beyond the houses opposite; afraid that one would come right up to the window. And that, if I was - for some crazed inexplicable reason - compelled to throw open the curtains; then I would find him perched on the sill outside, staring at me.

But I always looked carefully at picture of owls in books, and at the real life owls in Bristol Zoo.

There is also a family legend about how, at our next door neighbours, I would click my way through three of those 3D View-master discs depicting birds, until I reached a particular, terrifying, long-eared owl; when I would throw the device to the floor and run screaming from the room.

This being repeated time after time on subsequent visits... 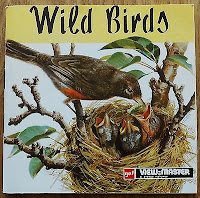