Church leaders tell Western Christians - "You're on your own!" 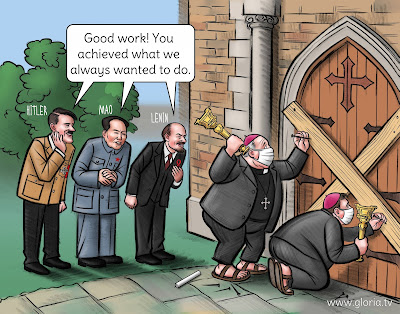 H/T to AC for the cartoon above. In fact the situation is worse than that depicted above; since (I understand) the Mass has never been officially suspended ever before in the c2000 year history of the Catholic Church. When you consider what the church went-through in that span of time, the current situation is both astonishing and appalling.

The rapidity and eagerness (and virtue signalling) with which leaders of Western churches have responded to the birdemic by ceasing masses, closing churches - by, pretty-much, essentially suspending church - strikes me as (esepcially in the case of the Roman Catholic Church) - shocking; but on further reflection, pretty conclusive evidence confirming what I already believed: that serious Christians are on their own now.

Whatever church members may want or feel - this has been a unilateral abandonment of whatever remained of the traditional, church-led form of Christianity.

The era in which 'being a good Christian' could be equated, or even approximated, by a life of obedience to church authorities and the practice of church rituals, has passed.

In the past, no doubt, the spiritual protestations of church leaders was often hypocritical; but now they see no need even to be hypocritical!

So extreme and ingrained is their Establishment-materialist perspective, that they seem not to have noticed that they have - in effect - declared themselves obsolete, irrelevant along with their institutions.


Anyway - as I said, this is merely confirmation of the reality that modern Christians have a different consciousness than Christians of the past; part of which is that we each know we each have primary responsibility for our Christian life.

Churches - and their leaders - may help or may hinder us; and that is for each one of us to decide.

Christians may choose to affiliate with a church or denomination, or may live more or less outside the avialable churches and denominations; but the individual agency of serious Christians now amounts to a spiritual fact.

It might be mentioned that so far most/all branches of the Orthodox Church appear to be doing the right thing.

@JG - I get that impression too - but it emphasises my point; because that is an Eastern church. I believe the East has a different role and destiny (or more than one destiny). And I am of The West.

Likewise, specific local instances of proper Christian behaviour in The West - such as Polish Roman Catholic Bishops - also empahsise my point; becuase it is top-down centralising rulership that is the primary problem: e.g. the Vatican.

When specific local churches are right but the church-as-a-whole is wrong, we have already moved into the individually-responsible Christian way; when the individual Christian is evaluating and judging his leaders - not just striving to obey them.

Greetings Bruce: I want to post an update from a member of The Church of Jesus Christ of Latter-day Saints. As you surely are aware, our church and temple services have been suspended. However, the function and purpose of the Church rolls on. Yesterday (Sunday), I held sacrament meeting (communion) in my home with my family and with one neighbor. My son-in-law and I both blessed and administered the bread and water. We sang hymns. My wife and daughter offered sermons. We closed with prayer. Many tears of gratitude and rejoicing were shed. I would dare say that it was the most powerful and spiritual sacrament meeting I have ever been a part of. Later in the day, our ward counsel, consisting of all of the leaders in our congregation, held a meeting using technology to discuss how our congregation is doing and what we as leaders need to do to help others. I heard from others that every single female in our ward was contacted and invited to participate in the sacrament by their neighbors or ministering brothers. It was a wonderful day. Priesthood keys are being used by living prophets. I feel confident our best days are ahead of us as a Church. Mike in Salt Lake City, Utah.

I have been preidcting that this kind of thing would be coming for some time - but now it is here, albeit not recognised for what it is. You can see that if there is a preference for home sacrament meetings, this is a large step towards a major shrinkage of the church. The vast apparatus of CJCLDS solidaritiy based upon frequent meetings and social actrivities is likely to go - and the idea of teh church as People. When the secular state abolishes temple ceremonies, closes/ confiscates temples; that will be another major step. Perhaps, the church will ultimately become collections of individuals - each mostly reliant upon personal revelation.

Do we have any historians among the readership who could shed some light on the behaviour of church leaders during the bubonic plague epidemics of the 14th century?

Institutionalized schools and churches shut down, don't have to go in to work, get to spend all day with the family, fewer deaths than the seasonal flu... not too bad, so far!

Bruce - something had to happen. The demons were pushing the Left to extremes with openly celebrating child abuse, every institute corrupt, etc. Maybe better now the later, or I assume God at least permitted it now for the greater purpose.

I pray always for the end of the evils, but don’t know if this is the path or how it will come.

The Orthodox Church, at least in America (OCA and Antiochian), has now reversed course and is falling in line and cancelling all services now, including the Liturgy (apart from private celebration by priest). It seems conceivable now that even Easter/Pascha might be cancelled for public health, if this goes on long enough. Disheartening, to put it mildly.

The justification being put forth is to "do our part" to protect the community/others, framed as fulfilling our Christian duty to our neighbors.