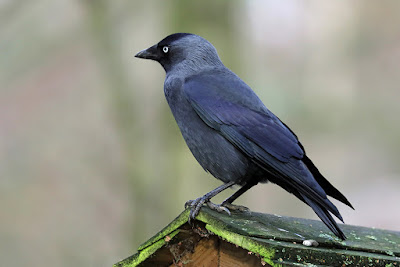 The cutest corvid? - and probably the smartest
I read today that the UK government has (oh so reluctantly, I am sure) begun to monitor and censor/control-access-to public on the current (?) plague of Jackdaws.

Specifically mentioned was the allegedly-'fake' fact that some people (including myself) are saying that these are no ordinary Jackdaws: not naturally-evolved Jackdaws, but instead corvids that show evidence of having had their genetic programming weaponised.

My tentative understanding already was that the weaponisation of Jackdaws is a factual-fact, rather than a fake-fact (based on both public and private information); now I am sure the fact is real (not fake).  These plague birds are not your common or garden Jackdaws!

That real-factual-fact does not affect, either way, the severity of the plague - which remains sub-significant by one or two orders of magnitude, and in quality; nonetheless, it is probably something that is worth taking into account.

That is to say: real problems with bionic-Jackdaws, and with the panic-justified response to the proliferation of engineered-attack-corvids in general, will be managed-away - rather than actually cured.  And this managing away will contrive to be authoritarian, coercive, entailing increased surveillance and control... in one word totalitarian.

Lately I'm wondering if l'affaire Corvid is actually some exercise in mass demonic oppression and possession. I, and presumably you, have heard and summarily dismissed the idea that [insert new iteration of mass media here] is a tool of the devil. But lately the reactions I've seen online and hearing in ordinary speech from coworkers in nothing but all Corona, all the time.

Corvids are glued to the Trending on Twitter, but something I noticed that no one pointed out is that it is under the category Politics. Hmm...

The mark of demonic oppression, obsession and possession is that the demon takes control of the lower faculties, namely the emotions and the passions, as opposed to the intellect (the faculty that makes use of reason and abstract thinking) and will (the faculty that chooses). The entire media is taking anyone who pays attention emotionally hostage, making use of fear, envy, wrath and so forth to influence people's will, and therefore actions. If you think about it, the matter of toilet paper clearing store shelves worldwide is a rather peculiar thing and it rather resembles an asset bubble--you buy simply because someone tells you everyone else is. Never mind that if the worst case scenario of systemic infrastructure failure happens, the toilet paper will be effectively useless.

And yet if you look at the reported figures, assuming they are true, they do not rise to the level of concern that other infectious diseases do. If you point out that influenza has killed more people over a similar span of time, the reaction is venomous--as if pointing out that an unadvertised killer pathogen somehow invalidates the deaths of those who died!

I don't know if Taleb is a charlatan, but his argument about tending towards precaution as a survival mechanism makes sense - hence being wary of new untested technologies like GMO. In this case, the unpredictable birds being an unknown, it would be a valid response to self-quarantine and avoid public content (something most of us are probably inclined to do anyway).

However from a Roman Catholic perspective, the spiritual aspect is unique. At my parish we can no longer have access to bless ourselves with Holy Water, and Mass being suspended during Lent from on high (for the first time in history) - very odd indeed! Whatever the source of the dangerous birds they are being used as an aspect of spiritual warfare.

I don't think the later part will necessarily work as true faith thrives under persecution, while the chafe will be "blown away" as our good Lord says.

@Andrew - Taleb is a prideful fool and dishonest - I don't know whether he is a charlatan. That argument is nonsense (although he may not have made it) because there is no substitute for trying to discover and speak the truth, and make a personal judgment on that - from a Christian basis, obviously. Truth is not sompething that can be captured by 'principles' or any other kind of formula or algorithm.

It is up to Roman Catholics whether they regard this 'crisis' as sufficient to stop doing what is most central to their spiritual life; but if Catholics regard this current level of hazard as sufficient then, to be consistent, it would be wise to arrange to suspend the mass until the end of the world - because it is currently no worse than usual, much better than at many, many times in the past - and things will very probably get a lot worse from here.

So - just wind up the church altogether, to be on the 'safe' side...

I'm also Catholic, and the response of the obviously-Cabal-manipulated Church is utterly shameful beyond compare. In bygone eras, during plagues (including the Big One) the response of the saints was to despise their own health in order to bring the Sacraments to the dying, knowing full well that doing so would seal their own death warrant.

Jorge Bergoglio's actions show that his and his bishops' belief is no stronger than that of the irreligious man on the street.

A minority of Catholics (myself included) see this event as the just chastisement for over half a century of compromise with the satanic elite, culminating in "papal" permission of sacrilegious communion for adulterers and idolatry inside Rome's major basilica.

@Ingemar and Andrew - Since the birdemic-panic is certainly unfolding under demonic influence; it should be given consideration that this (and the like in other Christian churches - although the specific loss of the sacramental bread at Mass is hard to match elsewhere) was precisely the main point of the whole exercise.

On the other hand, you need to consider the implications - this is a lesson about certain realities that some RCs have been in denial over. Now you *know*; and can proceed accordingly.

*This* response is a *serious* Roman Catholic one - add more Masses, each with a smaller congregation - it comes from Poland, natch:

But there would be no possibility of too-large crowds gathered at Mass in most parts of the UK, sadly.