What do you think about Bodies? 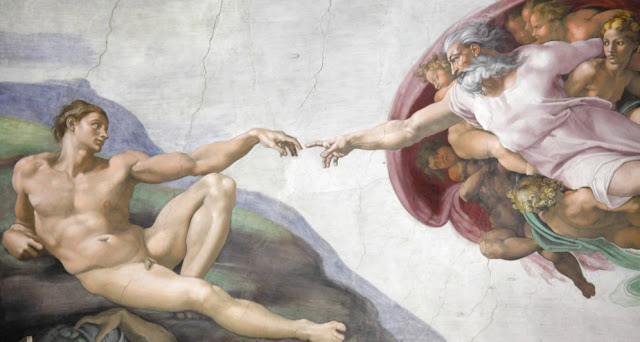 Is the idea of God as an old man in the sky intrinsically ridiculous? If you think so: why?

What do You think about bodies - because there is so much confusion and incoherence on the subject that you probably need to think this through for yourself.

What is wrong with bodies? Well, in the first place, our mortal bodies are subject to change - to decay, disease and death; so our mortal bodies as-they-are can be only a temporary solution; and should indeed be seen mainly as transient vehicles desgned to provide changing experiences to enhance the possibilties for learning.


But what about everlasting bodies? That is a different matter... yet there is a strong and wide-spread religious aversion even to this idea - the idea of resurrection.

Those who crave the spiritual, and oneness (including some who self-identify as Christians), dislike bodies and hope to become pure spirits. Oneness is only possible without boundaries - so that every-thing can merge to one - and bodies are all about boundaries.

Oneness-seekers love that which is name-less and form-less - and therefore implicitly reject Christianity; which is all about a specific person (the Christ), with a specific name (the name of Jesus); who was a man, had the body of a man; and what is more, Jesus was resurrected to have a man's form for all of eternity.


An eternal body implies eternal boundary... eternal separation, autonomy and agency. Since Jesus asks us to follow him through these transformations; this implies there will be an eternity of many persons-with bodies - and Not of boundary-less one-ness...

Since Christians regard Jesus as divine and he is eternally incarnated with an indestructible body; then the idea that Jesus's Father (God the Creator) also has a body should not be regarded as silly or blasphemous! It is, on the contrary, both a plausible and coherent inference.

But bounded bodies imply a physical location; and a Heaven of eternally alive persons is not found on earth; so it must beelsewhere: 'in the sky'.


In other words; if you are a Christian, you should be careful about adopting spiritual-oneness beliefs that are incompatible with the bodily resurrection of Jesus and of our-selves. We need to think of ourselves as - ultimately - embodied eternally.

And if you are a Christian; it is also worth considering the implications of resurrection: what this fact implies about Heaven, its inhabitants and locations - and the nature of life in Heaven. Because - from the fact of resurrection, Heavenly life must surely be a kind of being involving separate, incarnate, embodied individual persons.

In sum; the only thing genuinely wrong about the supposedly ridiculous (because 'anthropomorphic') idea of God the creator as an Old Man in the Sky - is that God is not necessarily old-looking, and God may not be solitary and a man.

I'm uncertain how well the particulars of the resurrected state have been anticipated by philosophers. In accordance with the dominant Platonist strain of thought, a perfect body was considered to be unchanging, which led to the Thomas Aquinas pseudo-image of a Heaven populated by adamantine statues milling about. Not appealing, and probably not right. But if resurrected bodies change, then in what ways, and why?

@S - Thanks for remembering that post you quote - I had forgotten writing it but it expresses my views pretty accurately.

Yes, taht's the kind of tstuff that needs thinking through: "if resurrected bodies change, then in what ways, and why" - As beings are individual; I suppose we can't be more exact than 'in accordance with growth and development'.

Maybe God is omnipotent not because he is the most static being in existence - as classical theology would have it - but because he's actually the most dynamic. The Bible calls him the "Living God." Potency has something to do with possibility, vitality, and life.

Maybe the unity of God's identity is not in his substance - which undergoes infinitely dynamic growth (as ours should) - but in his Love and in Time.

I also wonder whether metaphysical things which we sense only darkly, abstractly here on Earth have tangible physical presence in Heaven.

Infinite potentiality might be visible in a being's body - they hold their form perfectly, but the substance is like quantum foam or something. Or maybe we'll be able to see quantum foam directly, as if the surface and profile of every person's skin is a kind of moving edge of potentiality - a constantly cresting wave of the future.

If I recall correctly, the movie Donnie Darko showed a bubble projecting out into the future of people's bodies. But that's only one predestined future; presumably possibility would physically radiate or collect to and from the human body - and from everything else as well.

Come to think of it, why exactly is God typically imagined as an *old* man in Christian-influenced cultures? Obviously there's a sense in which an immortal being is immensely old, but we more commonly think of immortality as "eternal youth" than as extreme old age. The worldwide norm, across religions, is to portray the gods as idealized human beings in the prime of life. No one would think of characterizing Zeus or Anu or Shiva or the Jade Emperor as "an old man with a long beard who lives in the sky."

"...yet there is a strong and wide-spread religious aversion even to this idea - the idea of resurrection."

They may dislike the idea all they like as long as they're willing to embrace the reality, once confronted.

@a_p - Yes, except that my understanding is that resurrection happens only those who are prepared commit (forever) to love as the basis of creation.

This seems easy to me, now; but I could *understand* how some people do not want to make this commitment to inter-personal love - for example, if they want their consciousness to be extinguished (Nirvana-like), or wish to use other people for their own gratification (Hell-ish).

@Wm - I have tended to suppose it was due to the gerontocracy aspect of the ancient Hebrews - exemplified by the extreme old age attributed to their leaders (which you blogged about - https://narrowdesert.blogspot.com/2019/11/the-numbers-in-genesis-5-genealogies.html ).