How lies and slanders grow, and grow - by Rossini

The calumny is a little wind,
a very gentle little breeze
which nimbly, softly,
lightly, kindly,
begins to whisper.

Little by little, mildly,
in a low voice, hissing,
it goes flowing, it goes buzzing;
in people's ears
it enters deftly
and makes heads and brains
stun and blow.

Getting out from the mouth
the clamour grows:
it slowly strenghtens,
it already flies from one place to another.
It seems like the thunder, like the storm
that in the depth of the forest
go whistling, grumbling,
and makes your blood run cold.

In the end it spills over and blows up,
it spreads, it doubles
and provokes an explosion
like a cannon shot,
an earthquake, a rain storm,
a general tumult
which makes the air peal.

And the miserable one who is defamed,
degraded, trampled,
scourged by the public opinion [publico flagello]

Note: This is sung by the great buffo (that is, a dark-toned, large-voiced bass who specialises in comic characters in Italian opera) Paolo Montarsolo - master of understated acting... not. But exactly what is idiomatic and most effective in this style of opera. 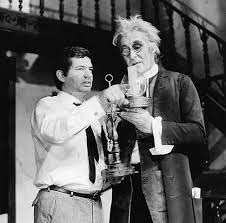