How dangerous are ravens? 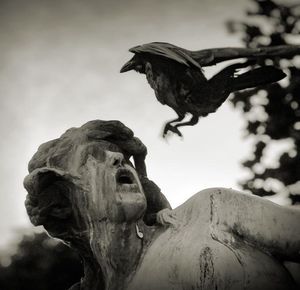 Is this prelude to a lethal attack by Corvid-19?

The data on deaths is the only reasonably valid measure of a new disease's severity - and even then there is a large area of discretion in assigning cause; and a strong tendency to over-count cases with a new disease - especially when its clinical picture is not distinctive and thus only detectable (and with false positives) by a blood test.

China has a population about 1.4 billion compared with the UK approx 70 million - that's twenty times larger. So 3000 dead in China corresponds to 150 in the UK - spread over (more than) 60 days means about 2.5 deaths per day - which is essentially undetectable with a normal-ish respiratory virus unless you are specifically looking for it.


(Or if it is killing young healthy people - which we would have been told, if it were happening.)

We are only detecting these many deaths - which is so very few - because we are looking for this specific cause.


We are So Extremely Far Away - a thousand fold? - from anything significant in terms of global deaths over this many weeks, that the international health crisis is revealed as fake. However, a fake crisis is better - from an Establishment perspective - than a real one; as it can be controlled. Indeed, from the mass media attitude; the decision to make the most of Corvid-19 seems only to have been made in the past couple of weeks, when it became clear that it was not a major global danger.

After all, it is as easy to make a real political-social crisis (as we now have - UK on lock-down - headlines say officially life is 'suspended' for three months) from a trivial-undetectable-fake epidemic as from a real one.

The Western population have decided to trust and believe the mass media and politicians, have become seriously afraid (and fear of the unknown and unreal cannot, even in principle, be reassured) - and been clamouring for something (anything!) to be done: for immediate action.

Well, this is what happens - we are getting that (long-prepared) 'something' with a vengeance! War economy and martial law, dictatorship and flattening of the economy, coercive conscription and direction of labour, fear and suspicion, divide and rule... Goody goody - lots of 'action'!


But although a genuine crisis has been manufactured, and a totalitarian power grab successfuly implemented with mass support; success in pursuing the underlying anti-Christian pro-evil totalitarian agenda is not guaranteed - it all depends on how people respond.


Oppression and hardship is not the same as spiritual harm; and indeed real Christianity has often thrived under extreme difficulties (the last British Christian revival was during World War Two).

The (demonic) Global Establishment may have made a Big Mistake with this one. Time will tell...


Note added (14 March 2020): Another factor in adopting Corvidae as the rationale for a global totalitarian takeover was that - according to the media story - the birdemic was brought under control in China by draconian and tyrannical methods (such as nailing victims into coffins and burying them while still alive... Actually I made that up. I think...). This gives the Establishment a license to do the same everywhere else. And when the total global mortality does not amount to a hill of beans, they will take credit for saving the world.
Posted by Bruce Charlton at Wednesday, March 04, 2020

I wonder if this makes an especially good fake disease, as the false positives could simply be "The Cold", as as I've already had 3 colds this year, it is likely I've had 1 or more strains of a normal coronavirus. Mixing up the scary one with the mundane one in testing, clinical examination confused about the "normal" flu, etc. seems to offer proof of this pandemic's existence.

I was trying to think why not just go 100% fake crisis, but I suppose enough people would catch on to that.

"fifteen times larger": not when counting to base ten.

@d - Thanks for picking up the typo - don't know where that came from!

2,300 reported deaths in Wuhan (pop. 11 million). Comparing the reported death toll to the entire population of China is misleading. The numbers are cooked, of course, but I think it really is a serious problem in Wuhan. Just not in the rest of China or the world.

@Wm - According to the cynical old journalistic tenets, as I recall them; 1000 dead in China (or India) was of considerably less significance than one British person killed locally - and barely warranted coverage, unless news was short...

If the reported death toll is in the ballpark of correct, I struggle to understand why China reacted in such an extreme fashion - locking down something like half the population, sealing off an entire province of 60 million people, shuttering factories and sacrificing hundreds of billions of dollars of economic growth - over a mild respiratory virus.

Perhaps what we witnessed was a power-grab by the Chinese government, but the Party already has near-totalitarian powers without needing to lock everyone in their homes over a fake crisis.

There is a profound disconnect here; something does not add up.

@HS - Doesn't amaze me at all. Totalitarian governments (such as we already have in The West) must still govern with at least passive consent, and always seek more complete power - for example to exploit social media technologies to monitor everybody, in multiple ways, 24/7 is the latest challenge.

For instance, even Communism under Stalin, after the massive purges and starvation slaughterings - at times he had to enlist and exploit the residual Orthodox Church to get the population to do what he wanted. This after killing almost every bishop and monk in the church!

Or the National Socialist regime in Germany tried to keep secret as much of the extermination of Jews as possible; anticipating resistance.

Those who want power - especially power to do evil - will always want more power - and will be infighting for a larger share of it. Totalitarianism is intrinsically unstable because negative - anti God/ Good/ Creation - as we see on The Left in The West.

Do you think I can still go to gym during this pandemic Bruce? I have little kids at home.

@TJ - The lesson we need to learn is to make such decisions (the ones we are still, currently, allowed to make!) on the basis of what we personally know - not on the basis of 'official advice' which will be aimed at our ultimate ill, not our good. And the ultimate good we should aim at is not of this world.

Haha, I don't know what's into Bruce lately, but I like it!

It's interesting, The Raven is my favourite poem, and atmospherically, in my head I always read it in a British accent... until I realize that it was written by a New Englander.

"Sybil!" said I, "Thing of loathing--sybil, fury in bird's clothing!
By God's radiant kingdom soothing all man's purgatorial pain,
Inform this soul laid low with sorrow if upon a distant morrow
It shall find that symbol for--oh, for its too long unjoin'd chain--
Find that pictographic symbol missing from its unjoin'd chain."
Quoth that Black Bird, "Not Again."

The first Corvid case here in Taiwan was announced in mid-January. A month and a half later, there has been a grand total of 1 fatality -- in my city, an acquaintance of an acquaintance. He was a sexagenarian with pre-existing health issues. Naturally, everyone is in full panic mode!

A full lockdown would not be in the establishments favour, here in the West. It would mean school closures, and the last thing they want is for people to fall back to homeschooling, knocking out one of their main power supplies.

I think the Princelings of the Air are on the back foot with this one. I don't think it's a planned pandemic. Obviously they're trying to exploit it, as with every event, but hasty improvisation is hard and prone to mistakes.

@C - I agree. Things may not work out as planned. Evil people do so love bullying and humiliating others that (now they have both excuse and the power to do so, with scarcely any limit) things could rapidly go too far; and then even the psycho-stupid-addicted Western population might realise what's going on. Then - who knows?

Are you sure about this?

That this COVID isn't a real threat to a lot of people. That we are not going to see megadeaths from this virus. Greg Cochran is an arrogant SOB, but he isn't stupid, and he is freaking me out.

@josh - Well, I've said pretty clearly what I believe - look at the number of deaths and ignore the rest - which is almost-pure speculation; and what is not speculation is contaminated by many layers of PR, lies and bias.

If the deaths are increasing exponentially into the hundreds of thousands/ millions worldwide, and include a significant proportion of young and fit people, and extend outside Chinese ethnics in similar proportions - *then* I will regard it as a medical/ biological global threat.

I have no problem about recognising a really dangerous global pandemic, but this isn't one - not by several orders of magnitude.

GC is Not a valid guide to medical matters; he knows extremely little about the subject.