Zero possibility of a rational response to corvidae 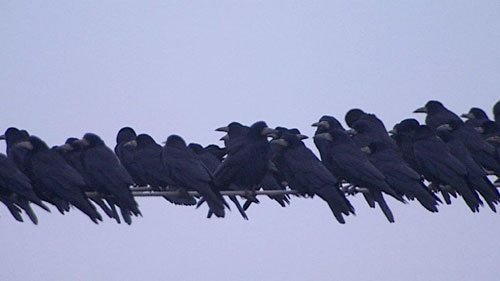 Nineteen (plus) corvids. A saner parliament than the Western Establishment

The Godless West is psychotic (as well as evil by intent) - adherent to a lunatic combination of... well hardly beliefs, but dogmatic and false assertions.

We need look no further than the trans agenda, which is proposed at the highest levels as simple biological fact. No society in history has ever had such a crazed and obvious evil systematically imposed upon it by rulers. Nor has anything so obviously crazed and evil been publicly and privately discussed, at such length, with such irrelevant and obtuse pomposity and hypocrisy.

I am therefore absolutely astonished to find people talking as if there is the slightest possibility of any Western rulers understanding the Corvid threat; and talking with the expectation that Western rulers could or would respond to any such threat in a way that was either effective or well-motivated.

For you or me to talk as if the Western Establishment was able or willing to act rationally in the best interests of its citizens is simply to share in their evil insanity.

I observed a telling contrast when reading of the upcoming South-by-Southwest mega-conference in Texas, which has a mix of attendants (people and companies) from the Technology and Mass Media worlds. The Technology companies still think according to something of an engineering mindset. Therefore, taking the corvid threat at face value as described, they have (almost) all canceled attendance for their employees, as part of sweeping business-travel restrictions. (Reasoning along the lines 'if there is a disease, it is likely to be spread at such a large conference, people will get sick, and the disadvantages of attending this conference outweigh the advantages'.)

The Mass Media people and companies, however, are (almost all) still planning to attend. They either don't actually believe in the corvid threat, or they are beyond being able to react to such a threat rationally, even taking it at face value as described, and being perhaps responsible for describing it in the first place.

This is very far from sane behaviour 'our beliefs may or may not be correct, but we tend to act rationally on the consequences of those beliefs'.

@S - A good example. If They were serious and rational about a real disease threat - people from risk areas would not be allowed in (nor would natives be allowed to visit such areas) - except with long quarantinea (at the travellers own expense, naturally). Instead they are allowed in, move freely, and societies cope with the consequence.

So - we adopt an ineffective and expensive procedure.

This follows established UK procedure for allowing potenital high risk terrorists to immigrate ad lib in their tens of thousands; then to expend vast resources on surveillance to try and prevent them killing people - but of course failing to do so.

Again - ineffective and expensive. But this strategy comes naturally to bureaucrats - they do it automatically, compulsively; and nothing (in the modern Leftist world) will stop them doing it!

This COVID = corvid business reminds me of the celebrated film "Birdemic: Shock and Terror."

@Wm - That's quite a movie. I watched the trailer

I've heard of B-movies/ direct to DVD, and there are the self-parodic so-bad-it's good movies like Sharknado from The Asylum - but this is something else.

The trailer itself is a work of art, obviously driven by -- PASSION! -- How can a two-minute trailer possibly take so long to get started? But somehow it does.

He will eliminate all the corrupt and harmful people.