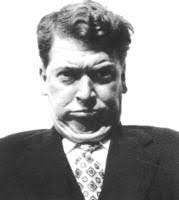 One of Kingsley Amis's real-life "faces" - some kind of 'upper class twit' like a retired Colonel, I guess?

In one of the best of comic novels - Lucky Jim, by Kingsley Amis (1954) - the eponymous hero is described as having a repertoire of 'faces' which he adopts in response to the vicissitudes of his constrained life. These are sufficiently elaborate and effortful that they grant Jim some degree of satisfaction: they seem a valid response to adverse phenomena.

I have a rather similar thing, which is to sing the words "Mental Person" to the tune of Handel's Hallelujah chorus; whenever I see some characteristically "2020" bit of human behaviour - such as wearing a 'face covering' outdoors, or alone in a car.

What actually happens is that I hum the tune audibly, while inserting the repeated Mental Person lyrics* internally.

I would not go so far as to recommend this tactic to anyone; but I have found that it converts a situation that would normally make me angry and frustrated, into a smile - or even a laugh.

Note: It is to Ron Weasley of the Harry Potter stories that I owe this usage of the term 'Mental'. This reminded me of the way that we used the same word for the same range of phenomena when I was a primary school kid in rural Somerset... which is, after all, just nextdoor to Gloucestershire, where JK Rowling spent her childhood only half a decade later.

Humor is the best medicine for tyranny.

This made me smile.

Well, I can expect that to be stuck in my head for at least the next month.